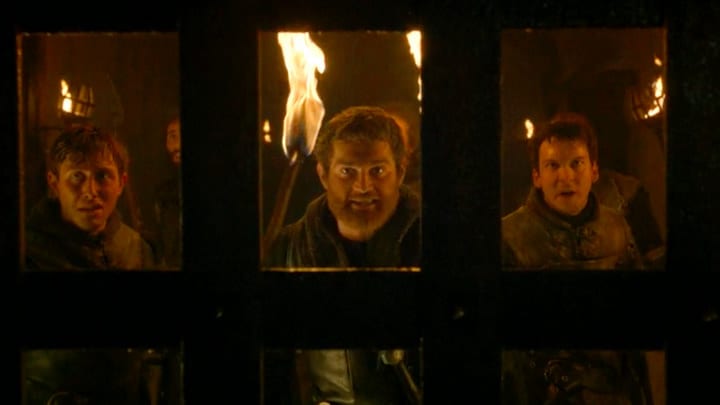 The last season of Game of Thrones will begin in Australia on Monday, July 17th. Albeit, the season will be split into two and probably wrap in 2019. However, we are beginning the final leg of what has been a remarkable television journey. To celebrate, we thought we’d cast a look back to ten of our favourite moments from the show in the lead up to the season premiere. Dave Griffiths will also be interviewing members of the cast in the upcoming digi-mag so be sure to check that out.

Episode 9 of season 4, The Watchers On The Wall, is one helluva hour of TV. Directed by Neil Marshall, it reveals that characters you couldn’t remember the names of, but you have actually been paying attention to, and furthermore in this episode has Marshall make you care about them a great deal. The set pieces have long been celebrated, and it’s remarkable how the set was expanded upon. What comes to mind is that giant scythe scrapping along the wall, wiping away desperate climbers like barnacles on a ship’s undercarriage. All the extras, the long takes, all the choreography and merging of stunt work seamlessly with special effects all deservingly remarked upon.

It is very difficult not to cite the conclusion of the love story between Ygritte (Rose Leslie) and Jon (Kit Harrington) as the standout. Scenes north of the Wall got vastly more interesting once Rose Leslie showed up, and Jon as a character became more enjoyable as a love-struck dimwit before he grew into the compelling leader he has become. Kit Harrington’s smile upon seeing her gets you every time; he literally can’t do anything else except be happy to see her even if that means he dies. Now that’s love, and, of course, she loved him too because she was never going to fire that arrow.

Ygritte dying in Jon’s arms is a wonderfully heartbreaking moment, but it is not the moment from this episode. Nor is it Ser Alliser Thorne’s (Owen Teale) lecture about leadership or his ensuring courage in battle. It is not Sam (John Bradley) getting in the thick of the action cursing, kissing Gilly or killing; the prelude with Maester Aemon (Peter Vaughan); or that previously-mentioned giant scythe. It is when Jon Snow, newly placed in charge, sends his mate Grenn (Mark Stanley) with five men to go down to the tunnel and make sure the enemy doesn’t get through. As Grenn goes to walk away, Snow tells him: “Hold the gate. If they get through…” and his voice trails off. With a look of determination on his face, Grenn replies “They won’t.” Those are the words that are spoken, but what one of the men is saying to his friend is: “I’m sending you to your death.” And his friend and fellow soldier is telling him, “That’s okay.”

Grenn and the five men are seen reciting the oath of the Night’s Watch down at the gate as a giant leads a charge against it. The camera cuts away right on the cusp of the fight, thus allowing the audience to use their imagination and have their last stand be more heroic and epic than anything that could have possibly been rendered. Before this episode, you’d be hard pressed to find people who could tell Grenn and Edd (Ben Crompton) apart as Jon Snow’s friends, but at that moment, you found out everything you needed to know about Grenn, and the kind of heroes it takes to win battles.

What lies in store for Jon Snow and the men of the Night’s Watch in this season? Winter Is Here.