[FILM/TV INTERVIEW] THE GET DOWN With Elliott Wheeler 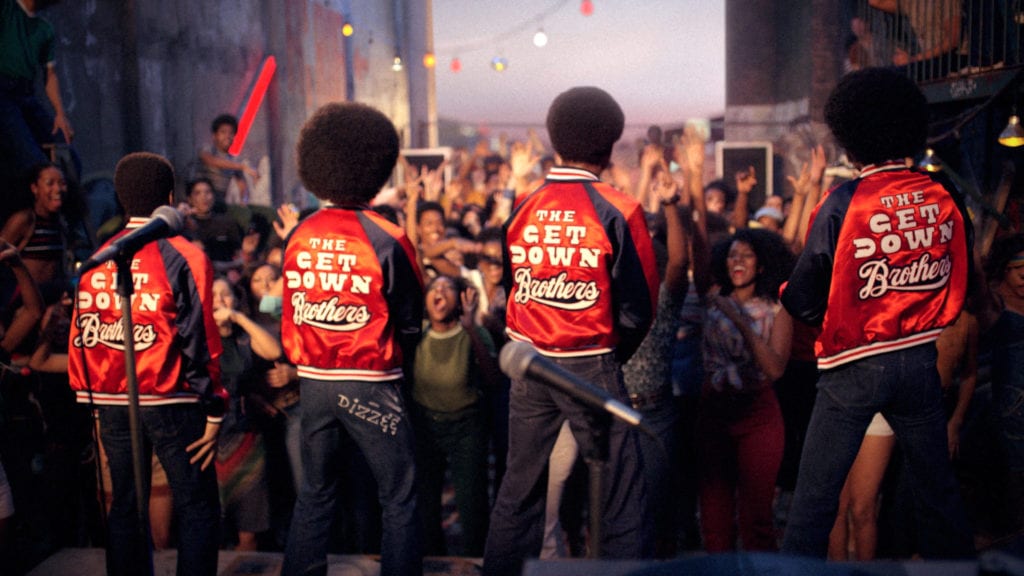 One of the hottest shows on Netflix at the moment is The Get Down – a musical drama that follows the lives of a group of teenagers living in The Bronx during the era of disco and early hip-hop – 1970s. Starring Justice Smith, Shameik Moore and Jaden Smith (yes the son of The Fresh Prince of Bel-Air himself) the show has not only managed to gain a cult following but has received critical acclaim as well.

What many people don’t realise is that the show has a strong Australian connection. Not only is it co-created by Baz Luhrmann, the man who has brought us movies like Moulin Rouge and The Great Gatsby, but a lot of the music in the show is created by Aussie composer Elliott Wheeler. With season two of The Get Down premiering on Netflix soon Heavy sat down with Wheeler to learn a little more about the show and his work.

Coming from a musical background Wheeler says he just progressed through to film/tv composing. “It’s something that I jumped into very early,” he says. “I did a lot of training – both classically and jazz training – and then when I was about 20 I started to do a lot of session work as a keyboard player and then I did some sessions with a composer called Peter Kaldor and he kind of took me under his wing and introduced me to scoring for film and TV. That was the beginning of it for me and having a wonderful mentor like that that could teach me the craft… and it really is a craft… on top of the musical training I had already down, and I’ve been doing it ever since.”

Wheeler also says that when it comes down to composing for a show or a movie there is never a set pattern that can be stuck to. “It really depends on the project,” he explains. “On some shows and films your pretty much only get the edit that is in shape but with this… The Get Down… I was there with Baz from the audition stage. I was there from the auditioning to the actors, right through the pre-production, through creating the music, collaborating with the artists that we were collaborating with, working with the choreographers and then being on set as the numbers were going down all the way through to finishing up in post-production. So with this particular project it was very intense and not very typical.”

The one thing that does change from project to project though is the tone and as Wheeler as worked on things varying from an Aussie horror flick like Restraint through to documentaries he explains how the tone of a project changes his style of work. “As a screen composer you are always trying to find the story,” he says. “A story that is in there but isn’t being told any other way. It’s not being told with the dialogue or visually and it’s usually a story that needs to be told but just can’t be told any other way than through music. A good screen composer will be sensitive to that. With something like Restraint you are trying to set up an uneasiness throughout it but with something like The Great Gatsby or The Get Down the movie or the show is leading the charge. You’re very much up front and there telling the story that the characters are telling on screen. It’s like a conversation you have to listen to what the other people are saying and then respond.”

When describing The Get Down Wheeler says, ‘It’s a Netflix series that was created by Baz Luhrmann and is set in 1977 in the South Bronx of New York. 1977 was an interesting period for a number of reasons. You had extreme poverty in that part of New York, everybody was absolutely broke, but then also out of that time you had this incredible period of creativity. One of the things that we are interested in musically is that this is the period when disco reached its peak. There were more disco records sold in 1977 than in any other year. So on one side you had this very polished art form and then in the rec rooms you had hip-hop being created. You had people like Grandmaster Flash and our story follows five young kids who are moving into adulthood and their discovery of both disco and hip-hop and it follows the trails of where both those stories go.”

While working on the series Wheeler has not only got to work with Luhrmann but also with those who helped create that period in music like Grandmaster Flash. “I’ve been working with Baz since we worked together on The Great Gatsby,” Wheeler says. “Then we did the musical version of his Strictly Ballroom film and then he brought me on board to help create a musical canvas for all the other musicians that he wanted to collaborate with on this. We had to produce tracks as well as create the score. Baz and I have kind of developed this form of musical shorthand now that we have been working together over the years. I think that helped when we brought these other musicians on board to populate as much as our musical vision as possible.”

Wheelers admits one of the biggest challenges on the show is creating music that matches the music from 1977. “It was fantastic but also a wonderful challenge. That era of screen composition is fantastic and a period I have loved for a long, long time. It was a dream to be able to jump right in there and we had so many different styles of music to play with as well. There were some scores that were very jazzy and then there were the Kung-Fu films and the action films of the 70s that were a massive influence on hip-hop as well and that is something that we have tried to explore with the score. We’ve also had Grandmaster Flash on board which has been incredible. He’ll turn up with original vinyl from 1977 and he would mix these sets for us which we can then use in the show. He would come to scoring sessions with us and he would be feeding stuff to me and I would be feeding stuff to him. He was super involved with the process and he also brought in one of his collaborators from The Furious Five, Raheim, who would take the lyrics that we had come up with and completely re-work them so they were done in the flow of 1977 so it was a fantastic challenge but also an amazing lesson in what was happening at the time. Amazingly there isn’t many recordings of 1977 hip-hop because it just hadn’t been recorded yet. There are some bootleg tapes but we hadn’t got to the time when hip-hop recordings were being made.”

The Get Down Season 2 will be on Netflix very, very soon.