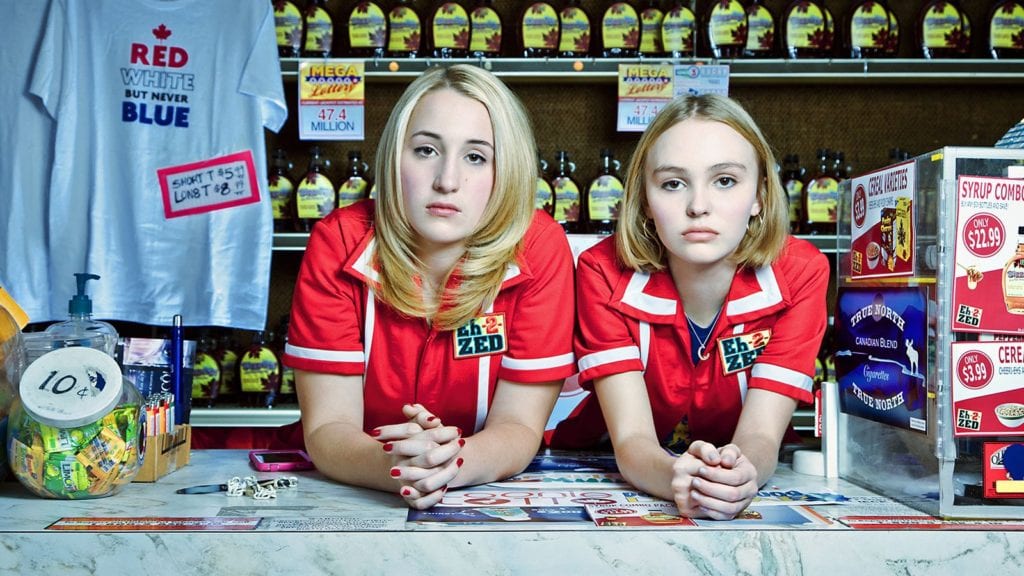 Let’s be brutally honest, the last few years haven’t been especially kind to filmmaker Kevin Smith. The man who has made some of the best comedies ever made – Clerks, Mallrats, Chasing Amy, Jay & Silent Bob Strike Back etc has served up some pretty ordinary flicks with Clerks 2 and Tusk. So despite me once declaring at uni ‘Kevin Smith is the best filmmaker of our generation’, I went into his latest film, Yoga Hosers, with a fair amount of trepidation… luckily though I was in for a pleasant surprise.

Yoga Hosers, the second film in Smith’s Canadian trilogy, centres around two fifteen-and-a-half high schoolers named Colleen Collette (Lily-Rose Depp – Planeterium) and Colleen McKenzie (Harley Quinn Smith – Tusk) who live to perform in their girl-band, do yoga with Yogi Bayer (Justin Long – Drag Me To Hell) and of course obsess over their mobile phones. What they dislike is having to work in the Eh-2-Zed and it’s there that they find themselves being invited to a Senior Party by the boy of their dreams, Hunter Calloway (Austin Butler – The Bling Ring), which ends up becoming a night that embroiling them in another mystery alongside famous ‘manhunter’ Guy Lapointe (Johnny Depp – Alice In Wonderland).

Now there will be some critics out there who will savage Yoga Hosers. Yes it is crazy and ridiculous – its main horror is Nazi Weiners that kill humans by entering their bum – but hey, this is Smith back in familiar territory, and unlike Tusk the script actually works. Here Smith allows for his comedy to go all different directions – from the mild comedy of two bored convenience store works (much the same as what we saw in Clerks), that gross-out humor that Smith does best (one of the funniest scenes here is a mother and daughter talking about periods while a poor guy tries to eat his food in peace next to them), character humor with creations like Yogi Bayer and Guy Lapointe and that completely ridiculous humor such as the Nazi Weiners. The great news is that, this time, it all works and there are very few lulls in the film.

The comedy writing also allows for two stars to be born. Lily-Rose Depp and Harley Quinn Smith both show that they didn’t get these roles simply because of who their fathers are, as they both put in great performances that reveal these girls are both going to be stars. Their comedic timing works as well as anything we saw in Mean Girls and when they have to stray away from comedy and deliver something a little deeper… well they manage to do that as well. Perhaps the biggest surprise in Yoga Hosers is the return to form of one Mr. Johnny Depp. After a string of recent bad performances Depp is actually serviceable here as Guy Lapointe and his ‘over-acting’ character performance works pretty well this time around.

Yoga Hosers isn’t a film for everyone. If you don’t like over-the-top comedy or aren’t already a fan of Kevin Smith’s work then you’ll be in for a big surprise. But if you just want to sit down, tune out and have a laugh at the younger generation then you are going to lap this one up.