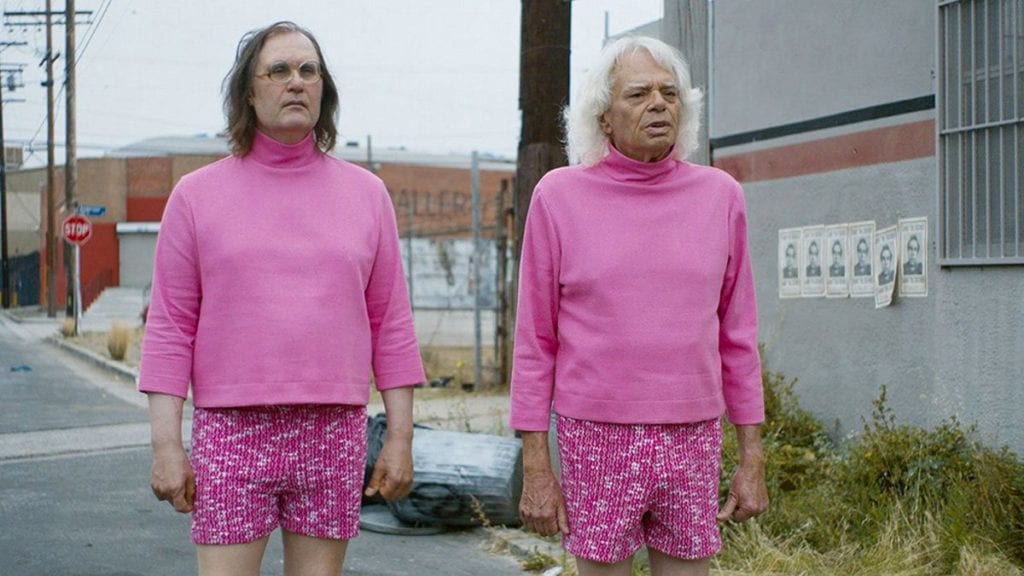 One of the films that caused an absolute frenzy at this year’s Sundance WTF was The Greasy Strangler, a film that on viewing it I have to say is going to do to the horror film genre what Napoleon Dynamite did to indie cinema. If you loved your cinema to be straight-laced you are going to hate The Greasy Strangler, if you like things a little left of centre then you are going to be telling all your friends to go and see it.

The film centres around a father/son duo. The father is Big Ronnie (Michael St. Michaels – The Video Dead) a man trapped back in his grand delusion that he was once a king of disco. He still runs some dodgy Disco Tours and is someone who likes to grease himself up with cooking fat and then kill people… yes he is the serial killer that has been dubbed The Greasy Strangler. Then there is the simple son Big Brayden (Sky Elobar – Don Verdean) who helps his Dad out with the tours and is often on the receiving end of his father’s verbal put downs.

The relationship between father and son takes a dramatic turn though when Big Brayden begins dating a woman he met on one of the Disco Tours, Janet (Elizabeth De Razzo – The 33). While things go well between Big Brayden and Janet she is suddenly left having to make a choice when Big Ronnie makes his intentions known for her as well.

Everything else about The Greasy Strangler aside it doesn’t take watching the film for very long for you to realise that director Jim Hosking (ABCs Of Death 2) is a director that really knows how to deliver quirky in a manner that really captivates you. The Greasy Strangler reveals him to be the Wes Anderson of the horror film world. Hosking makes sure that The Greasy Strangler is a ‘busy’ film. Yes the film does consist of a high level of quirkiness but Hosking also allows the film to be a decent throwback to the shlock horrors of the 1980s and does more than enough when it comes to plot to have the audience wrapped up in a world of suspense.

It’s the plot of The Greasy Strangler that really draws you in. One moment you are laughing, the next you’re looking away from the screen (normally because you don’t want to see old man penis) but at the heart of the film you are constantly wondering what is going to happen to the characters that you are watching. First you can’t help but wonder whether Big Ronnie is finally going to get the point where he actually wants to let Big Brayden reach a greasy end, but then also in an unusual twist for a horror film you’re also left wondering which of the men that Janet will choose… kind of like in a demented version of a romantic comedy.

With all the quirkiness happening plot wise in this film things are only enhanced even more by one of the weirdest soundtracks you are ever likely to hear in cinema history… thanks to the masterful work of Andrew Hung who as delivered a quirky composition that sounds like a slower version of the music once created by Scooter. To some Hung’s music may sound like fingers on a blackboard but too many others (myself included) it is the type of music that would make me walk out of the cinema and want to purchase the soundtrack.

Perhaps the biggest thing to come out of The Greasy Strangler though are the amazing performances from the main cast. Jim Hosking asks a lot of his cast with Michael St. Michaels, Sky Elobar and Elizabeth De Razzo all having to perform some very confronting scenes with a load of full frontal nudity. Strange as it may sound this is the kind of film that could see Michael St. Michaels make the crossover to mainstream cinema while Sky Elobar’s comedic timing makes you want to see him do more comedy in the future.

The Greasy Strangler may not be a film for all but if you love quirky cinema this has to be high on your to see list. One of the more surprising films of 2016 this one gets two thumbs up from me… now to hunt down a copy of the soundtrack.

The Greasy Strangler is screening at A Night Of Horror (Sydney) on Sunday 4th December. Tickets available here.