We all know the story of Robin Hood, right? The man who wore green tights and went around Sherwood Forest stealing from the rich to give to the poor with a band of merry men that had to dodge the Sheriff Of Nottingham as they went about it. There have been no shortage of Robin Hood movies over the years. The likes of Kevin Costner, Russell Crowe and Erroll Flynn have all played the part… and we have even had a comedic version with Robin Hood: Men In Tights which actually managed to put a smile on everybody’s faces. Well now take everything you knew about the Robin Hood legend and cast it aside because director Otto Bathurst (Peaky Blinders, Black Mirror) is about to introduce us all to an all new look for the famed outlaw.

This rendition begins with Robin (Taron Egerton – Kingsman, Eddie The Eagle) as one of Nottingham’s elite. He happily lives in his castle overlooking the city, while married to the love of his life – the beautiful Marion (Eve Hewson – Bridge Of Spies, Enough Said). Their fairytale life though is destroyed when Robin is drafted into the Army and is sent by the malicious Sheriff Of Nottingham (Ben Mendelsohn – Rogue One: A Star Wars Story, The Dark Knight Rises) to take part in his Crusades in the Middle East.

While Robin at first proves to be a brave and determined solider, who is skilled in archery, he finds himself sent home in disgrace after trying to protect the son of Little John (Jamie Foxx – Django Unchained, Colleteral) – an enemy soldier. Upon his arrival back in Nottingham though Robin finds that nothing is the same. It has been reported that he has died in action years earlier, his castle has been looted by The Sheriff and his men and Marion has re-married, this time to revolutionary leader Will Scarlet (Jamie Dornan – Fifty Shades Of Grey, The Fall) who wants to make a stand against The Sheriff for the people of the city.

At first Robin doesn’t want Marion to know that he has returned and makes Friar Tuck (Tim Minchin – Californication, Squinters) swear to hold his arrival a secret. However, when Robin runs into Little John the pair decide to aid the revolutionaries by creating the character of The Hood to help fund them all while Robin will smooze The Sheriff to find out his corrupt ways.

Many traditionalists may feel that the Robin Hood story doesn’t need a working over, but to be honest I liked what Bathurst and his team of screenwriters have done here. While the film does draw parallels to the story of Green Arrow and V For Vendetta it does do enough to stand on its own and becomes an action film that any true fan of the genre will enjoy. The re-take on the old time Robin Hood story means that the audience does not know what is going to happen next which certainly adds to the suspense at hand. The film also has a preachy side and it fairly obvious what the film is trying to point out about modern day politics as it explores the theme of the poor paying for a war which sees an invading party going into the Middle East for nothing but gathering riches, then there is also the plot about the secrets of the Catholic Church, but at the same the characters at hand are so likable that you are willing to overlook what could have been seen as a negative for the film.

Bathurst also announces himself as a director to watch as his style here seems to embrace the graphic novel style action of a film like Kingsman and then mixes it with the ye olde suspense and thrills of something like A Knights Tale. Bathurst also seems to know how to bring suspense to the fore and whether it be a horse and cart race through the city or a dramatic dialogue driven scene between The Sheriff, Robin and the Archdeacon (Ian Peck – The Wolfman, Harry Potter And The Deathly Hallows) he always finds a way to have the audience on the edge of their seat, especially once it is revealed that the characters here are always in danger.

Taron Egerton is almost unrecognisable, in a good way, as Robin and this paired with Kingsman is revealing him as an action star whom also has the acting muscle to pull off more dramatic scenes. He is well supported by Jamie Foxx but throughout this film the limelight is stolen by the supporting cast. Eve Hewson (Bono’s daughter) is a real find as Maid Marion, she is a true acting natural who sets the screen alight every time she is seen. Likewise Tim Minchin shows that he can play an important role in a film without falling back on his comedic skills, but the real standout here is Aussie Ben Mendelsohn. Mendelsohn owns this film as the evil Sheriff Of Nottingham. He plays the role like The Sheriff is a Nazi General, and he has the jacket to match. His skill at making a character that has been a bumbling idiot in some portrayals a vile and corrupt villain that turns your skin as your watch him is not to be faulted… he makes this character someone you will remember for a long time after the credits role and some of the best scenes in the movie are Mendelsohn’s one-on-one scenes with either Egerton or Minchin.

Robin Hood could be one of the surprise hits of 2018. It’s a graphic novel action film takes the Robin Hood tale to a whole new level and gives it modern day relevance. With great performances by Egerton, Hewson and Mendelsohn this is a film that certainly should not be labelled ‘just another action film’ as it becomes a thrill-ride where you can’t help but barrack for the heroes. 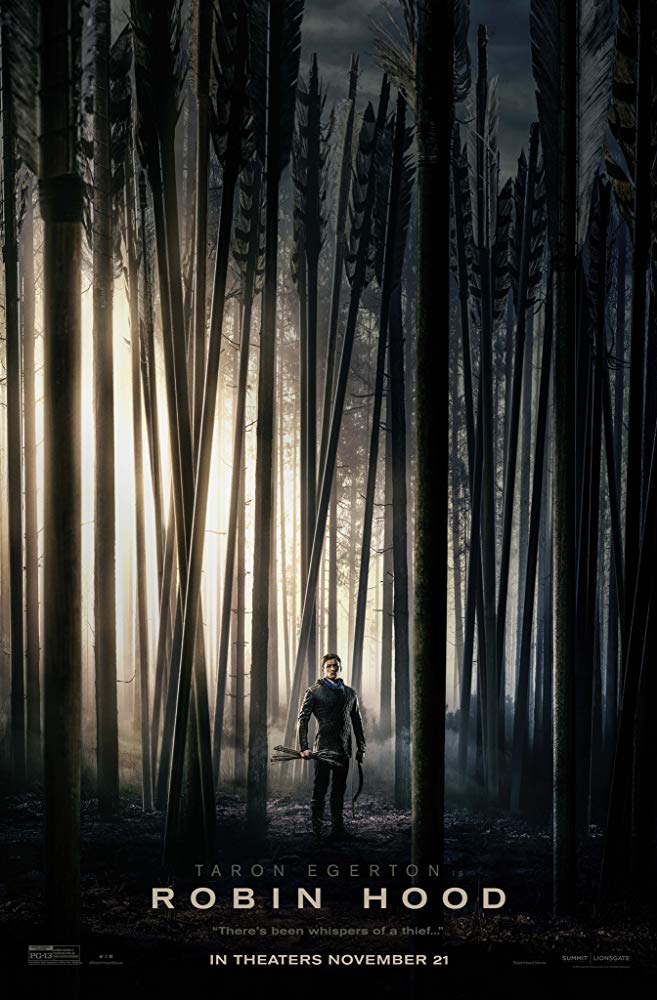