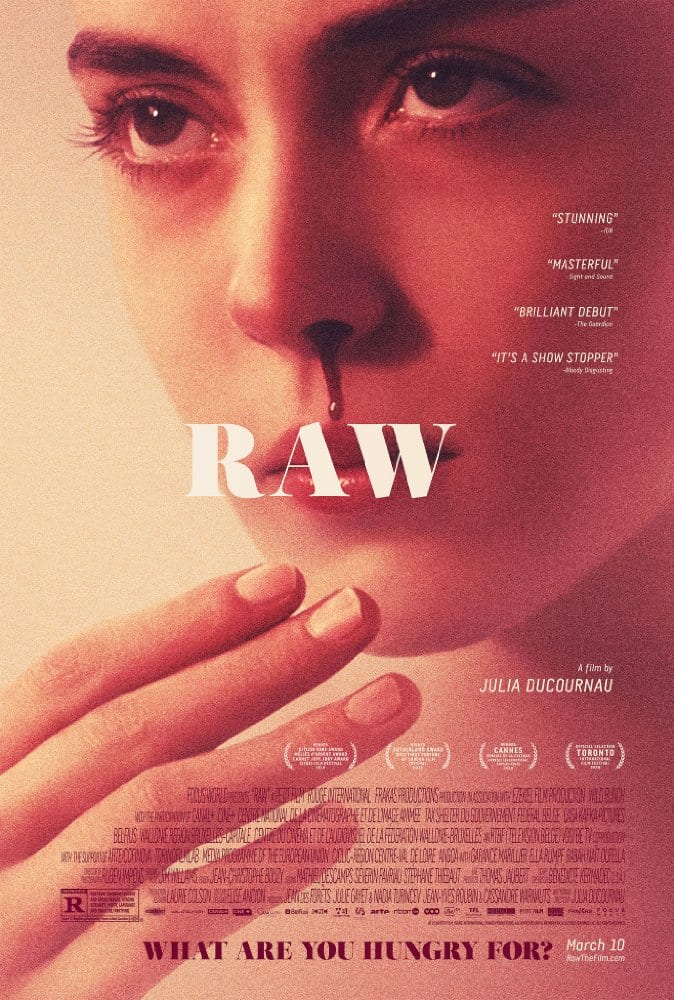 Often when a horror movie is really being talked about as ‘one of the horror movies of the year’ it ends up being a complete disappointment once you actually you get a chance to watch it. That was certainly a fear for me going to watch Raw. As many of you would know horror is one of my favourite genres but often when a film is really being ‘pumped up’ I get my hopes up and then find myself largely disappointed… as was the recent case with Get Out. You’ll be happy to know though that wasn’t the case with Raw… no, once again Monster Pictures have brought us Aussies one horror film that certainly lives up to all the hype.

From French director Julia Ducournau (TV’s Mange) the film explores the events that follow after young vegetarian, Justine (Garance Marillier – Solo Rex, Junior) who during a hazing ritual tastes meat for the first time. As an unexplained taste for meat suddenly rises in her, she finds her relationships with her sister Alexia (Ella Rumpf – Tiger Girl, War) suddenly spiralling. As the gifted young student also finds herself attracted to some of the men around her another hunger is also awakened.

The only people that are going to be disappointed by Raw are those that will go into this film expecting to be like the more subtle horror films come out in Hollywood at the moment. Raw is gritty, but not to the point where it is a filmmaker only out for the shock value. Instead, it is a creative film with a well-developed and surprising screenplay also created by Ducournau. While some may argue that the film has a plot aimed at exploring man and woman’s need to eat meat, the basis of this film is a storyline that shows a young woman’s needs and desires developing in a way that cinema has rarely done in the past. Rather than using shock tactics the film instead takes an artistic Argento-style feel which only intensifies some of the film’s more suspenseful scenes.

Few screenwriters, Joss Whedon aside, have developed plots that explore human sexuality and needs with such brilliant subtext and Ducournau is a smart-enough screenwriter not to let that bog down her film and her script and instead the film delivers a fair amount suspense as the audience is taken on a journey as Justine’s needs develop and they try to work out not only exactly what is happening to her but also just how it’s going to affect her life in the long run.

Ducournau’s screenplay is also the perfect vehicle for young actresses Garance Marillier and Ella Rumpf to really show just how exciting their skills are. The pair brilliantly delivers not only during some of the film’s more confronting scenes but also excel at some of the more intense scenes as their relationship is pushed to breaking point. Normally scenes of this intensity would really challenge actresses at this age but together here Marillier and Rumpf deliver performances that should silence anyone that says horror films rarely produce classic acting moments these days.

Raw is one of those horror films that really sticks with you. Not because it plants a horrific imprint on your brain but because it is a genre film with a real arthouse feel that further enhances the film. As you watch the film, you also get a distinct feeling that Ducournau is a director that we are going to be talking about for a long time to come as her directional stylings are a breath of fresh air in a genre that is being held back by some average Hollywood films.