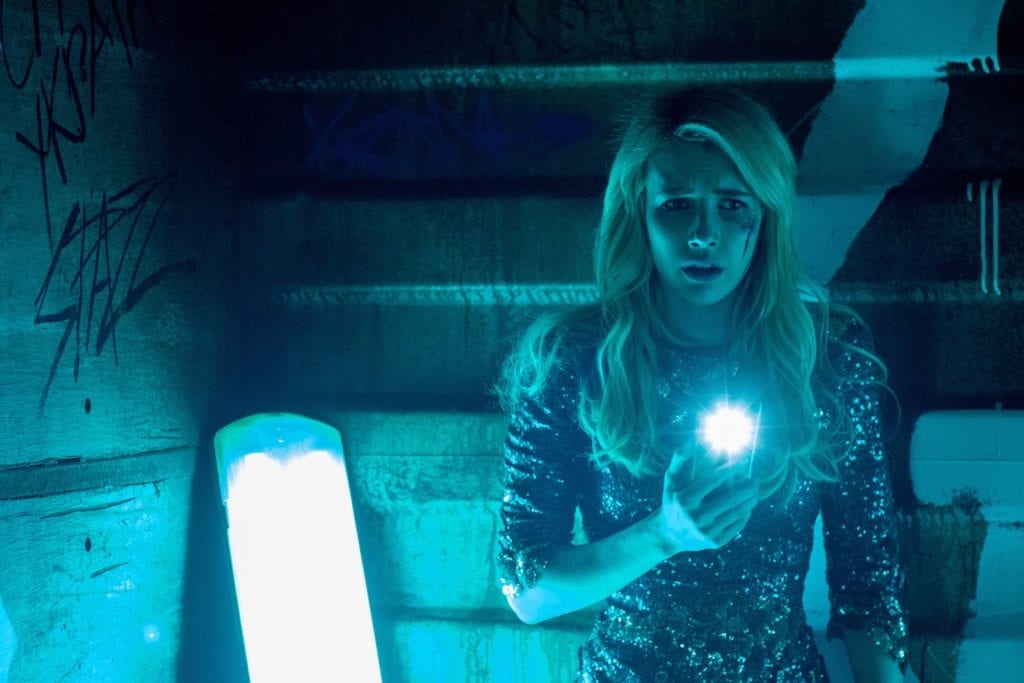 Over the years many filmmakers have tried to make films that follow people playing computer games or hacking. Some have worked – films like Hackers or Swordfish – but many have also failed because: let’s look at basic filmmaking here, watching somebody look at a screen doesn’t exactly make for tantalising cinema. Well it seems like filmmakers Henry Joost and Ariel Schulman (the duo that brought as Paranormal Activity 4) have found a way around that because their brand new film Nerve is actually a pretty decent film.

The film follows a group of teens who find themselves playing a kind of truth or dare game online. They log in as ‘players’ or ‘watchers’ and then in return for cash the ‘players’ do as the ‘watchers’ demand no matter how dangerous or demeaning the task at hand. For the rich and eager to be famous Sydney (Emily Meade – Money Monster), it is a shortcut to popularity. While she loves the game she finds herself pushing her best friend, the reserved Vee (Emma Roberts – We’re The Millers) to break out of her shell and play it as well.

After a bad situation where she is rejected by the guy she likes, Vee decides to prove everyone wrong about her and signs up as a ‘player.’ This soon escalates when the ‘watchers’ decide they like her paired up with another ‘player’ Ian (Dave Franco – Now You See Me) and they find themselves in a game that seems to be turning to the deadly side.

Nerve is one of those films that is going to nicely surprise most of the people that go to see it. The film opens here in Australia with very little known about it but is certainly a film that has enough twists and turns to keep you interested throughout. The film’s computer/smartphone screen sequences do work well, although I must question the use of the music throughout the film. Edgy, suspenseful scenes need something a little heavier than the bland electronica that litters the film (has anyone in the music department heard of something like Skrillex?).

Story wise though the film works well, although expect it to be toned back a little for the teenage audience at which it is aimed. While it is certainly a film with a similar story to 13: Game Of Death, it’s not as violent, although it does manage to serve as a good warning to teens to be careful what kinds of websites they sign up for.

Like she did in American Horror Story: Coven, Emma Roberts really does show why she is one of the most talented young actresses going around, while Dave Franco really stands up and for once embraces his leading man role.

Nerve is a suspense movie aimed at a teen audience in the same way films like Disturbing Behaviour and Cruel Intentions were. As a film it works and certainly delivers more than it promises.