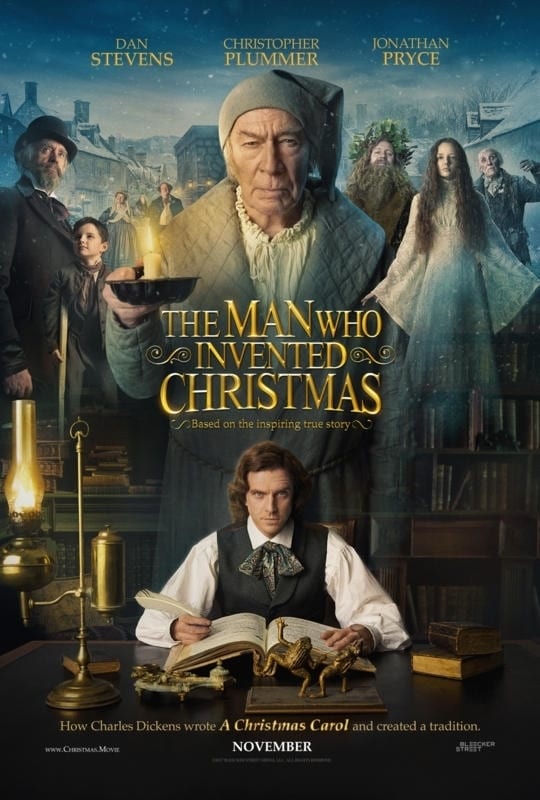 A Christmas film is supposed to be light and fluffy and not hard-edged, right? Wrong! I’ll admit that there hasn’t been many Christmas films in recent years that have really got me talking after I have watched them the first time – but The Man Who Invented Christmas changed that. I’ll admit that a film about how Charles Dickens came up with the concept of one of his most famous works, A Christmas Carol, wasn’t a film that immediately had me thinking ‘I need to see that,’ but to be honest this film had me leaving the cinema thinking – ‘wow this film needs to win awards.’

The film does centre around legendary novelist Charles Dickens (Dan Stevens – Beauty & The Beast, TV’s Downton Abbey) and how he brought to live characters that were floating around his head, like Ebenezer Scrooge (Christopher Plummer – The Insider, A Beautiful Mind), and put them down on paper. But the film also goes deeper than that – it looks at the pressure that Dickens was under due to the fact that his last couple of novels had failed, the fractured relationship that he had with his father, John (Jonathan Pryce – Tomorrow Never Dies, Glengarry Glenn Ross), and the personal sacrifices that he and his wife, Kate (Morfydd Clark – Pride & Prejudice Zombies, The Falling) had to make in order to get the novel published.

The Man Who Invented Christmas is a film that is going to surprise a lot of people. Screenwriter Susan Coyne’s (The Best Laid Plans, Slings & Arrows) screenplay goes so in-depth with the characters and is so creative that it becomes an absolute dream for director Bharat Nalluri (Miss Pettigrew Lives For A Day, Tsunami: The Aftermath) to helm. Coyne’s concept of having the characters surround Dickens as he writes and his interaction with them is pure screenwriting genius and the fact that Nalluri goes with that and enhances the scenes makes this a truly amazing filmmaking feat.

Nalluri also doesn’t mind bringing a little bit of darkness to a Christmas film either. The scenes with Dickens going back to factory where he worked as a child add another level to this film, while exploring deep themes such as Dickens having to cope with the fact that his father steals with him adds levels to the film that ends up educating its audience about who Charles Dickens was as a man as well. The Man Who Invented Christmas also has something that so many films have lacked this year as well – suspense. While you know that ultimately A Christmas Carol was published that does nothing to take away the suspense that is generated when the film shows Dickens struggling to get the novel finished on time. Such is the power of Coyne and Nalluri’s storytelling that once the end credits roll you realise that you will never look at A Christmas Carol in the same way again.

The power of Coyne and Nalluri as a team also brings about some amazing acting performances as well. Dan Stevens is stunning as Charles Dickens. While he is an actor that has been around for awhile now it is this performance that shows that he is a gifted actor who has more than just good looks to get him by. But the man who steals the show here is Christopher Plummer. Plummer plays Scrooge eerily well, bringing him to life in a way that shows him as a truly frightening, dominating but also vulnerable character. Plummer brings Scrooge to life in a way that only a seasoned theatre actor can, and it will be a great shame if he is not rewarded for this performance with a few awards.

The Man Who Invented Christmas shows that it is okay to bring a little bite to a Christmas film. Brilliantly acted performances make this an absolute gem for the audience to watch while Coyne and Nalluri’s storytelling allows the audience to learn about Charles Dickens in a way that is not clichéd in any sense. This is one of the best Christmas movies to have surfaced in a long time.