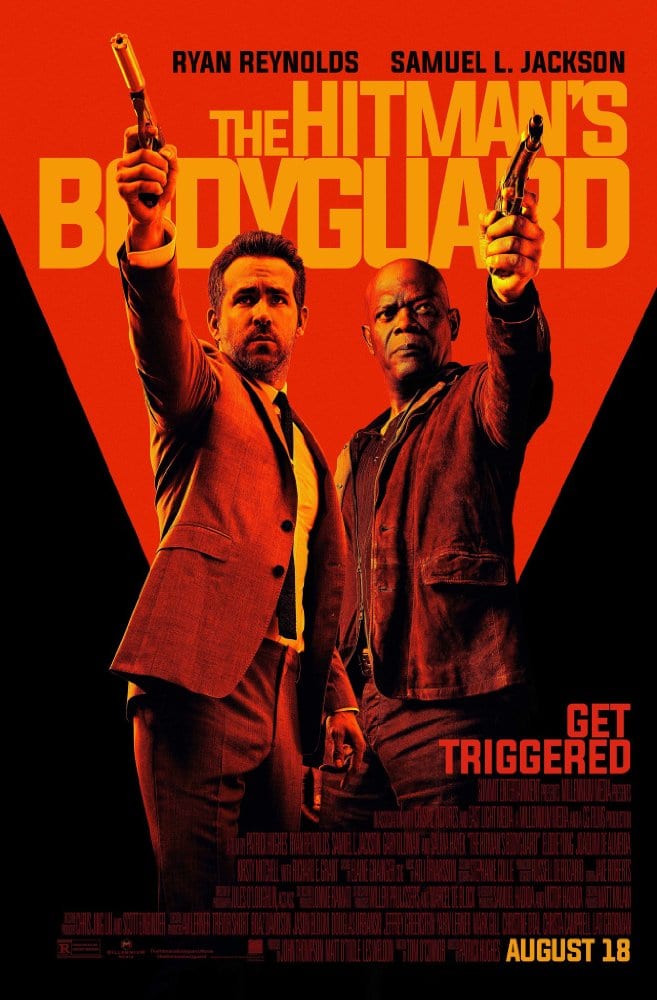 Back in 2010 an Australian film was released that deserved a lot more credit than it ever received. The film was called Red hill – an amazing action meet western film that showed all cult cinema fans that Aussie director Patrick Hughes was a director to watch. The next step in his was to direct the star-loaded The Expendables 3, which sadly took a hit at the box office because of the film being heavily pirated before its release. Now Hughes is back with The Hitman’s Bodyguard – an amazingly good action film that also has moments of comedy that truly work.

The film centres around Michael Bryce (Ryan Reynolds – Deadpool, Green Lantern) who once had a AAA rating as a bodyguard. He relished on that fact until the day it all went wrong. One of his charges, a criminal, was shot and killed – something that Bryce has always blamed on his then girlfriend, who he has never stopped loving, Interpol Agent Ameilia Roussel (Elodie Yung – The Girl With The Dragon Tattoo, Gods Of Egypt).

After years of depression and looking after seedier clients Bryce suddenly finds Amelia calling him and asking for help with a huge case. Notorious hit-man Darius Kincaid (Samuel L. Jackson – Pulp Fiction, The Hateful Eight) has turned crown witness in a trial for war criminal Vladislav Dukhovich (Gary Oldman – The Dark Knight, Batman Begins) in return for the freedom of his wife Sonia Kincaid (Salma Hayek – Desperado, Puss In Boots). The problem is though Interpol realises that they are way out of their depth trying to keep Kincaid alive before the trial and Bryce is the only man who do it, but Bryce and Kincaid have a history of their own as Kincaid has tried to kill Bryce many times before.

We’ve seen a lot of action films try to mix comedy in over the years, and a lot of failed miserably. Luckily Hughes and his screenwriter, Tom O’Connor (Fire With Fire) seem to have learned a lesson from films like Bad Boys and Lethal Weapon from through the years, as they get the mix of action and comedy one-hundred per cent spot on. In a way, they know that you carefully have to keep things separate, so one moment you get a brilliant car and boat chase through Venice and then the next minute you get a comical scene involving Sonia in her prison cell… and it works. Without giving anything away plot wise there is also a brilliant comedic surprise as one character is suddenly flung through a car window as well… perfect comedic timing.

The big thing that comes through with this film though is that Hughes is one of the most exciting action directors in the world at the moment. The previously mentioned car and boat chase, to the strains of Australia’s own Spiderbait, is right up there with anything that you would see in The Fast & Furious franchise. Then there is the great hand-to-hand combat scenes, like the ones in the kitchen or in the hardware shot, that are equal to the fights that we have seen in the John Wick franchise. These scenes are going to impress even the most hardcore action fans out there.

Of course, the key to making a film like The Hitman’s Bodyguard work is the chemistry between the two central characters. Here Jackson and Reynolds are amazing together. Reynolds has cut his mustard in some good action films over the years, Deadpool and Safe House is among his best, and throughout his career, he has shown that he can handle the odd comedic moment as well. He’s perfect to play Bryce and his performance here is enough to let us forgive him for making R.I.P.D. Likewise Jackson is perfect for Kincaid, he’s believable as the ‘cool’ hitman and he doesn’t let age slow him down through any of the stunts either.

Casting Gary Oldman to play a Russian war criminal was a brave casting choice. It could have been a choice that blew up in the casting agent’s face badly and had people saying ‘remember when Gary Oldman tried to play a Russian,’ but he is a good enough actor to pull it off without the character ever feeling clichéd. Salma Hayek also delivers her comedic lines to a tee playing the foul-mouthed Sonia while Elodie Yung is sensational as the romantic interest for Bryce.

The Hitman’s Bodyguard is perhaps the most well-rounded action film that we have seen so far in 2017. Interesting and believable characters mean the audience cares for them from the get-go and then when that is mixed with some sensational action sequences from Hughes you end up with an action film that is going to be talked about for years to come.