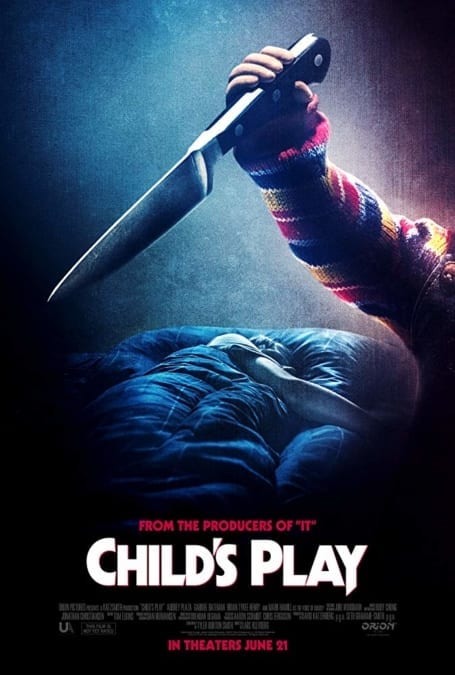 Hollywood’s obsession with re-making or re-booting classic horror franchises has been around for awhile now. For some it has worked well, watching modern day directors like Rob Zombie take on old classics like Halloween have been a joy to watch, on the flip side though there have been a tonne of re-makes so bad that they should have gone straight to DVD. It’s for that reason that horror fans have approached Lars Klevberg’s adaption of Child’s Play with some trepidation.

Set in modern times the reworking sees over-worked and financially strapped single mother Karen Barclay (Aubrey Plaza – Safety Not Guaranteed, Ingrid Goes West) decides to spoil her son, Andy (Gabriel Bateman – Lights Out, Outcast), whom she can see is struggling with making friends after a recent move. She spoils him by giving him a defective Buddi doll that was returned to the store that she works out.

These dolls are supposed to be an cyber-interactive doll that can not only be a friend to a child but when connected to the web can also help out households by doing things like arranging transport for family members. Unfortunately the doll she gives to Andy is Chucky (voiced by Mark Hamill – Star Wars, Brigsby Bear), a doll left with evil intentions after being sabotaged by his original creator.

While many might have questioned Klevberg’s lack of experience when first seeing his name linked to this film it does turn out that he is the right man for the film and also someone that looks like having a brilliant career ahead of him. Few filmmakers could take on a project like this and deliver an all-round film that not only pays tribute to its original source material, be tongue-in-cheek while also delivering enough blood splatter to keep all of hardcore horror fans as well.

It is actually surprising just how much ground is covered by the screenplay by Tyler Burton Smith (Quantum Break, Kung Fury 2). From the poignant topic of whether or not the ‘cloud’ is ultimately going to end up being dangerous for human beings through to the much darker topic of the dangers that can present when a single mother brings a love interest into the household around her children. Some of the scenes between Andy and Karen’s aggressive partner Shane (David Lewis – Man Of Steel, Unspeakable) and some of the most horrific in the film because of how natural they are written and performed… it is once again a reminder of how sometimes the subtext in a horror film can outweigh the slasher element of a film.

When it does comes to the horror side of the movie the film works as well. Lars Klevberg does take the film into some very dark places. The slasher element of the film is handled well while Chucky himself does appear pretty frightful, the fact that he is linked to the ‘cloud’ and can also use the world around him as a weapon actually enhances the horror of the original film. The strange thing though is the film’s horror seems to work better when it is not really trying rather than some of the scenes that seem forced. The ‘garden’ sequence is just ridiculous while the scene involving a table saw is just too predictable, they are both a shame when the rest of the horror works so well.

Likewise the writing does also let down some of the characters. While Detective Mike Norris (Brian Tyree Henry – Widows, Spider-Man: Into The Spider Verse) is one of the most interesting characters in the film it feels at times his character is dangerously under-used at times. The same can be said for Andy’s two friends Falyn (Beatrice Kitsos – The Exorcist, Travelers) and Pugg (Ty Consiglio – Wonder, Woody Woodpecker), if these two had been used to better effect the film could have really taken on a real Stranger Things or Goonies journey instead they feel massively unwritten.

For the most part though the acting is top notch. Gabriel Bateman is a young star in the making, here he takes on a challenging role amazingly well. Whether it be a scene that needs true emotion or a scene of true terror he does a stunningly good job that any actor even older than him would be proud of. Likewise Aubrey Plaza also does a sensational job. She plays the role of Karen with no ‘pity me’ style of attitude anywhere to be seen, instead she is natural in her performance even if that means at times having a snappy attitude that may make some believe the character is unlikeable at times.

In the large scheme of things Child’s Play does work as a film. There are some parts which might annoy the serious film lover but for the most part Lars Klevberg has created a good popcorn, horror film.