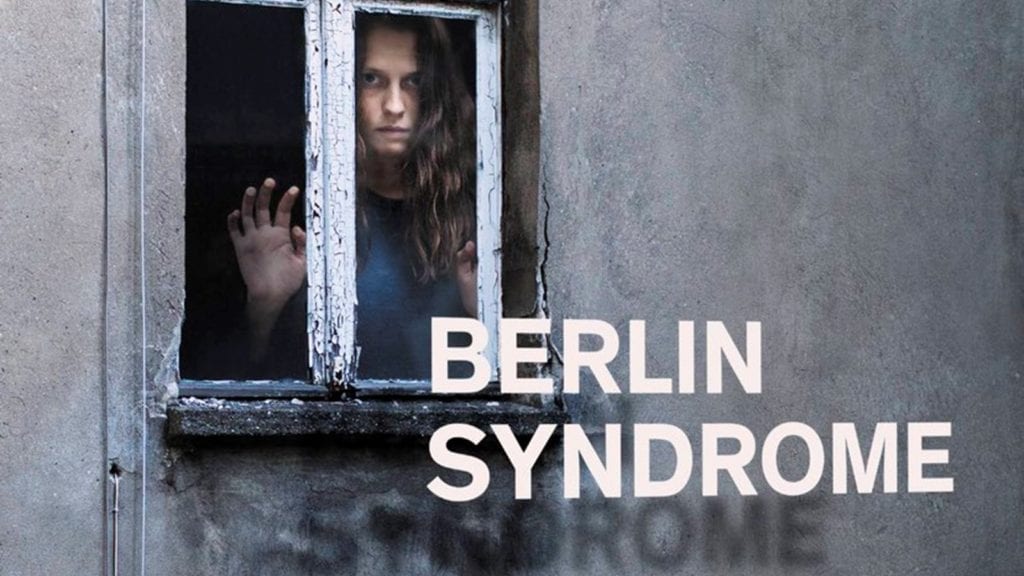 The premise of Berlin Syndrome is uncomfortably and horribly realistic, giving the horror film tremendous impact tapping into our worst fears of travelling abroad or one night stands gone awry. A tautly made thriller with undercurrents of deeper themes it never becomes more than that but it boasts two courageous performances at its centre.

Teresa Palmer stars as young Australian photographer Clare who is travelling Europe by herself. In Berlin she meets the handsome and charming Andi (Max Riemelt) and there is interest on both their parts instantly. Knowing what is coming only makes these early scenes more disquieting, Andi is friendly and charming but there’s little things that stink of psychological manipulation right away. The beginning of the film walking around a European capital city very much resembles indie flicks of other genres. Tight close in walking shots from behind Palmer’s roaming figure, cutaways to interesting vignettes of ordinary people going about their daily lives, quiet deserted homely stores where our heroine sits and relishes art and culture around her with a smile. She goes back to Andi’s place, they have sex, she wakes up the next day but the key he has left doesn’t open the door or the massive reinforced bolt across the door. The windows don’t open to the courtyard two storeys below and there is no appearance of neighbours in the other apartments.

That night he returns, apologises for leaving the wrong key and they go out clubbing. In the blue lit smoke filled haze of the club Clare looks at him adoringly and Andi takes that openness and that joy on her face as a moment in time that must be kept forever at all costs. The young man fears it, distrusts it but absolutely trusts that it is temporary so he seeks to possess it and to pervert it. With growing terror the audience also comes to realize he is fully capable of becoming bored it with it too. The next day Clare awakes and the door still won’t unlock and she starts making more alarming discoveries until her predicament becomes fully apparent.

The rest of Berlin Syndrome will be about answering one urgent question, will Clare escape the apartment or will she suffer a far worse fate? The cinematography by Germain McMicking changes to take in her surroundings and to reflect the confines of the apartment. Prominence is also given to a room that Andi resides in that is always locked as well. We escape the apartment at times to see more of Andi’s life while Clare for the most part does not. Andi has a job as a school teacher and a father (Matthias Habich) that he does care for and with whom the two of them seem to share a healthy relationship.

Clare also changes; Teresa Palmer with minimal dialogue delivers the physicality of the role and the constant changing state of her character’s mental state. Andi is evil incarnate, a representation of so many sickos worldwide who have done this and worse to people but it is too is a brave performance from Max Riemelt who gives nuance to the character showing how he could seduce Clare but ultimately how he is also doomed to never live as a normal human being. There are allusions to psychology and how the two genders view the other at their worst. These are good for background noise but don’t get developed into anything important to the plot. Sometimes remaining mysterious and ambiguous adds depth to a movie and encourages audiences to take away what they like from the film. Other times it reeks of laziness and the inability to really develop the plot or its themes further.

Berlin Syndrome has the techniques and performances of a quiet thoughtful film that has something deep to say about the human condition. It remains though just an effectively made straight out thriller. Part of a new breed of psychological horror it does what it sets out to do and nothing more. Because of the nature of its subject matter it’s hard to recommend as a movie too. It’s not that horror films from the past were fun for everyone but Freddy Krueger played on our deepest fears while Andi represents our darkest horrors. One is a mate jumping around the corner and giving you a jump scare a second before you recognise him and laugh. The latter is someone staring at you across the train carriage stone-faced and not moving. How do you prefer to be scared?