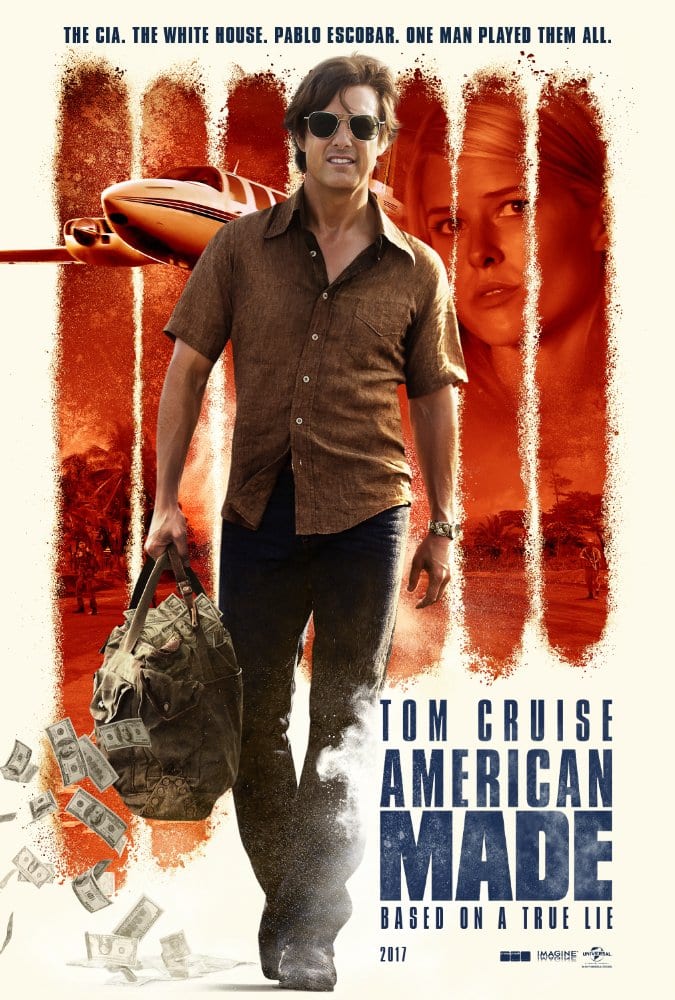 [et_pb_section admin_label=”section”]
[et_pb_row admin_label=”row”]
[et_pb_column type=”4_4″]
[et_pb_text admin_label=”Text”]
Barry Seal! The name sounds like that of a used car salesman who perhaps that Uncle of yours that has been known to ruin the odd party with his drunken antics. Barry Seal – remember the name because you are not only about to discover that he is one of the most interesting criminals to ever walk this planet but his portrayal by Tom Cruise (Top Gun, Mission: Impossible) in American Made is going to make him a character that cinema fans remember for a long time to come.

Directed by Doug Liman (The Wall, Edge Of Tomorrow) American Made tells the story of Barry Seal (Tom Cruise) in every gritty detail. The story begins with Barry as a bored commercial airline pilot who is tired of flying mundane flights and even the thought of going home to his beautiful wife, Lucy (Sarah Wright – 21 & Over, Walk Of Shame), can lift him out of his slump.

Then suddenly he is approached by a young CIA Agent – Monty Schafer (Domnhall Gleeson – Ex Machina, The Revenant) who offers him his own ‘company’ as he does a number of jobs for the CIA in South America. Those jobs soon lead to Barry meeting one of South America’s leading drug cartels who offer to pay him big money to run drugs out of the continent using dangerous airfields and trying to avoid the officials. The call of money is too much for Barry who then has to walk the fine line of working for the Government and the cartels… a world that sometimes seems to blur into each other.

When you stop and think about it Barry is the kind of guy that an audience shouldn’t warm to but here Liman and screenwriter Gary Spinelli (Stash House) not only make him a character that you like, but also a character you find yourself hoping can outrun the authorities and also get himself out of the many scrapes that he finds himself in. While Spinelli’s screenplay makes Barry the kind of guy you would like to invite to your place for a beer Liman makes this feel have a more natural feel than you would normally get from a crime or heist film. Having Cruise deliver lines direct to the camera gives the audience that instant connection with Barry that so many filmmakers hope an audience can get with the lead actor, truth be known though very few filmmakers are able to pull it off.

The other thing that allows American Made to connect with its audience so well is the comedy that is littered throughout the film. While Spinelli’s screenplay never aims to make this a laugh a minute film it does give Cruise the chance to play Barry in a cheeky way that not only gives the audience a chance to have a little chuckle but of course is one of the things that makes Barry such a likeable character. The script also gives comedic elements to other characters including Lucy’s redneck brother Bubba (Caleb Landry Jones – Get Out, X-Men: First Class) and the local Sheriff (Jesse Plemons – Paul, Battleships). Again the characters aren’t there for comedy relief but the comedic element to them does make them memorable for the audience.

Stylistically Liman once again shows why he is one of the most exciting filmmakers around at the moment. His recent effort with The Wall gave the audience such a natural feel, even with action included, that it felt like you were watching an documentary, and once again Liman makes this film feel very natural as well. The film-like look to the film gives it a retro feel that means he isn’t forced to constantly remind the audience that we are back in the Reagan era while the idea of to-camera monologues and a camera that at times moves with the characters gives a fly-on-the-wall feel to the film that just makes it a sensational viewing. Likewise the aerial shots of Barry flying or flying over the camera at times are also creative and impressive, showing Liman’s true skill.

What makes American Made really work though is Tom Cruise. Over the years Tom Cruise has shown that he is one of the actors that you can guarantee on in a film. If you see Cruise’s name on a poster you can guarantee it is a decent film. That trend continues with American Made. Cruise was born to play this role – he has the cheeky demeanor to pull off the role of Barry, he has comedic timing and knows how to pull off emotion in a dramatic scene. Very few actors would be so well-rounded to pull of this role, but Cruise does it with sheer brilliance.

There is a lot of great buzz around American Made… believe it all. This dramatic biographical tale has comedy, action and suspense all mixed together perfectly by Liman. Add that to a brilliance performance by the leading man, Mr Cruise himself, and you’ve got one of the best of films of 2017.
[/et_pb_text]
[/et_pb_column]
[/et_pb_row]
[/et_pb_section]