Filling In The Blanks With VIRGIN BLACK 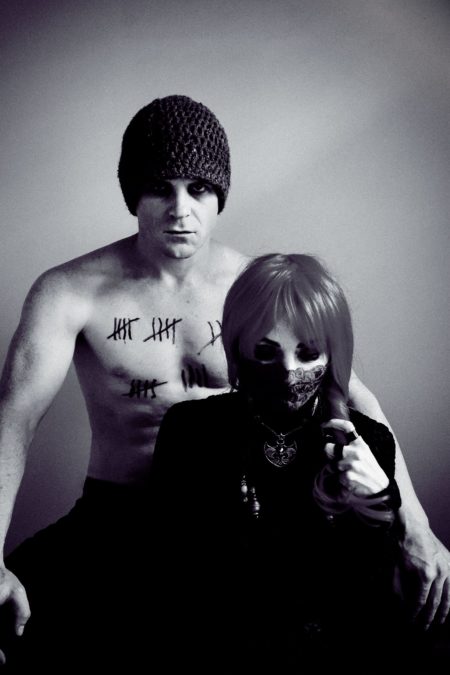 Last month, Australian doom legends Virgin Black announced the November 18 release of a brand new “cinematic” music video for their song Walk Without Limbs, along with the first official worldwide streaming release of their 2001 album Sombre Romantic one week later.

Up to now, their first four albums have only been available to stream in North America, a curious fact in itself. So, when discussions with their new Australian-based record label Dark Escapes Music led to an interview opportunity with a member of the band, we naturally had a few questions.

As it turns out, it was actually Ian Miller, former bass player of Virgin Black, who sat down to chat with us recently about what’s coming up for the band.

Heavy – Thanks for your time, Ian. No offense intended, but as a former band member you weren’t exactly the person we expected to be talking to when proposing a Virgin Black interview. What’s the situation with the two current members (vocalist Rowan London and guitarist Sesca Scaarba) regarding interviews?

Ian – (Laughs) Thanks for having me along, Kris. Yes, that’s an interesting question. They can be fairly mysterious personalities. Behind the curtain, for example, Sesca, the lead guitarist is a really artistic and creative soul, and more of a quiet achiever. Those who have seen Virgin Black live may be a little surprised about this because she’s a real
dynamo on stage and yet behind closed doors she’s one of the most humble people I know. After years of complete silence, the long-awaited missing piece of the puzzle, “Requiem – Pianissimo” didn’t come with words, or a press release, but with a succession of images posted on their pages – a cryptic sequence of non-verbal posts that finally
culminated in the unveiling of that long-awaited album. And now, it seems they have simply continued to remain wordless, allowing the music to just speak for itself.

Ok, fair enough mate. Tell us about your involvement with the band over the years.

Virgin Black has been a big part of my adult life. I was lucky enough to see them at their second ever show in about 1995 when they played with Paradise Lost. I bought their demo cassette and thrashed it in my car, and from then onwards, I became a massive fan and attended every Virgin Black show for the next couple of years. Then, in 1999, the band needed a bass player and Rowan approached me to see if I was interested in joining. Of course, I said yes. Since then, I have been lucky enough to tour all over the world with Virgin Black, including Europe, Australia, USA, Canada and Mexico, initially as the bass player, and later as their front of house sound engineer.

Are there any particular tour stories that stick out in your mind?

Yes, definitely. One of the highlights for me personally, and I know the other bands members would agree with this, was the Australian tour with Opeth. They really are one of the most talented bands in the world, and simply amazing to watch live. We also really enjoyed getting to know those guys on the road, especially Mikael and Peter. One tour I’ll never, ever forget was our 2006 North American tour with Finnish band To Die For. It was a total rollercoaster ride from start to finish.

Can you tell us more about that tour?

Sure. So, we had to let our tour driver go before the first show due to safety concerns. Because of this, I had to drive 14 of us – the Finns, Virgin Black and a merch girl – almost the whole way around the country in a Ford E350 van. After the first show, the local support act pulled out of the tour, leaving us with no backline. Fortunately, we were able to find another support band at the last minute. On our way around the country, we had a gun pulled on us a couple of times, narrowly avoided a twister in Kansas, were denied alcohol service in Texas (simply because we weren’t from Texas), and later in the tour I nearly lost an eye when a glass got smashed close by. It was an extremely interesting few weeks in many ways. Nonetheless, we had some amazing shows, especially the ones in Mexico. The people there were so friendly and extremely passionate. We also had the opportunity to see some amazing landscapes, meet some great people and share some really good times with the lads from To Die For, including an unforgettable end of tour party. We really felt like they were our brothers by that stage.

So as far as I understand it, Virgin Black released their fifth studio album in 2018, but nothing new has been recorded since 2006. Is that correct? Does new Virgin Black music exist, and will more of it be recorded in the future?

I think it’s possible for new Virgin Black music to be released in the future, but I’m not privy to any definite plans right now. In the meantime, Sesca has been working on a project with Xen from Ne Obliviscaris called Spiine, which I predict to be very exciting.

You’re now working with Virgin Black in conjunction with your own digital music distribution company called Dark Escapes Music. I’m guessing the band appreciates having “one of its own” at the helm. How are you finding the crossover with business and music?

That’s an interesting question. Obviously, there’s a solid trust relationship between the band and myself. I mean, we have literally travelled the world together, and so I know those guys as well as anybody. That definitely helped when it came to discussing the business side of things. Dark Escapes Music was set up by myself and a couple of other music industry friends with the specific goal of having an artist-centric music business. We prefer to under promise and over deliver when it comes to the business side of things. So, from that point of view, we offer a range of services, ranging from basic digital distribution through to label-type services for artists from all over the world, and we are really proud of what we have set up so far.

Cool, yeah, you guys have a great platform. Back to Virgin Black: having been involved with the band for many years, and in a variety of roles – bass player, live sound engineer, and now distributor), you must have a unique perspective on its inner workings. Can you share some unique insights into Virgin Black?

Sure. I guess the first thing I’d say is that Virgin Black for me is a very serious band. For example, when it comes to the music side of things, both of the songwriters, Rowan and Sesca, are extremely passionate about their craft. They pour out so much of their soul into everything they do, from the recordings, to the artwork, and most definitely also to the live shows. When I was touring as their sound engineer, I felt that I shared the responsibility of presenting something special to the audience. And so I always did my best to make the mix big and powerful, in order to convey the emotion of the music as effectively as possible. However, there’s also another side to the band. We always felt like a family, and we have shared so many laughs and good times over the years. That’s something special for me about Virgin Black. There’s an honesty in everything they do.