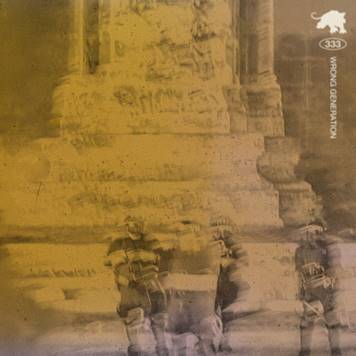 Since their inception in 2017, Inglewood, California’s Fever 333 have delivered constant overdriven belters literally year after year after year, and as much as they’re consistent with their delivery of content they’re just as much with their signature sound!

The three-piece have always managed to throw down the specifics which has branded them as their own entity within the heavier side of the music world.

The single word which best describes the opener “Bite Back” on the band’s latest offering Wrong Generation is VENOMOUS! As Stephen Harrison‘s guitar fires into the opening riff, the tidal wave of sound has already built momentum and damn does it break like a million litres onto concrete! With Aric Improta‘s first kick to snare beats, the Arc has split in half and there are no survivors. But the icing on the salt-infused cake is Jason Aalon Butler‘s pure subjective disgust via the man’s abrasive and attention-demanding vocals, sheeesh what an opener!

The second track “Block Is on Fire” continues the intensity with its intentionally distorted loop beat and looped vocal pattern “Block is on fire, block block block is on fire” will stick in your memory bank like homemade gig poster glue! Rightfully so as the message is clear as the lyrical content swerves into the main point that “L.A. is burning!” and no one will ever forget the events that have unfolded this year, and no this ain’t about no pandemic, it’s about what is just!

“My Uzi weighs a ton son carry it” is the trade offline for the title track “Wrong Generation” and serves as the downright emotion of this track! There is a theme to this album and it’s perfectly stated yet again on this one. Biff, Pow!

I mean this with all due respect but if Rage Against the Machine and Wes Bowland (Limp Bizkit) ever had a musical baby together I’d safely be able to compare it to the musical bones of track four “U Wanted A Fight”. This is the part where it’s worth pointing out that the repeated lines in each track really draw one’s attention during the madness of this offering! “Walk Through the Fire” follows suit but breaks from loop effects goodness to straight-up rhythmic fireworks!

One thing is clear, we didn’t need waking up during this eight-track ball break but damn did we get it on “For the Record” which features Walter Delgado from L.A’s Rotting Out. A pure hardcore punk anthem with all the trimmings on this one with snare roles that will send you off of your chair and that break and ending is the duck’s guts!

“Wrong Generation” has a chaotic beauty about it, it is honest and direct!

Proving that there are even more layers to Fever 333 is “Last Time” which is a stripped-down shared vocal/ piano track that is emotional but shares that same beauty of previous tracks on this release. The recording itself is raw and sounds like it was done as a live take all in one, thus making it even moodier.

A key component to a solid release is how it rounds out/ finishes, not to generalise (but we can all agree somewhat) that our attention spans can waiver due to the length of an album which can sometimes rob the listener of gold nuggets that exist in the later part of a record. “Supremacy” is just that for this release, it sits in the middle in the intensity scale compared to the rest of the album but continues the trail of raw emotion nicely!

Overall Wrong Generation is a collection of and wise words put to bombastic beats and riffage for humans that want and will die to be heard, this album is a blatant (and successful) attempt at creating a soundtrack to protest/ rally for the sake of humanity and for standing up to what is actually right! There are more than a few reasons for people to be pissed off due to the current straight of certain parts of the world and this release will not only help maintain the fire inside people but it will serve as an ignition for others who are waking up to what is really going on at the moment!

ELEPHANT GUN Dust Off The Cobwebs