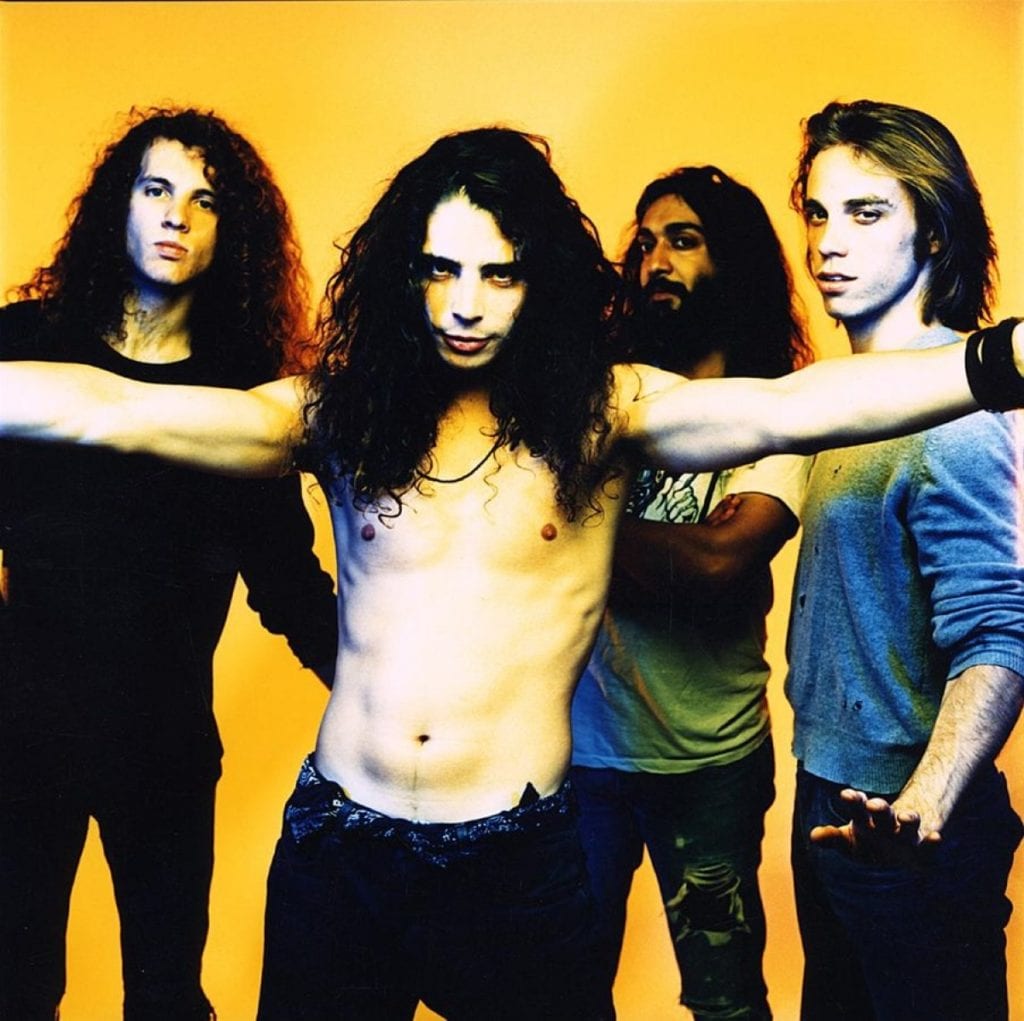 When it comes to Grunge music there were two bands who stood out among their peers: Alice In Chains and Soundgarden. Today’s edition of HEAVY ROOTS focuses on Soundgarden, who was, lead by the talented musician and songwriter Chris Cornell.  Cornell’s career sprouted throughout the music world with a captivating solo career along with Soundgarden and Audioslave.

Starting with a collaboration between Layne Staley and Cornell, taken off Alice In Chain’s “Sap” (1992). Credited as Alice Mudgarden, also featuring Mark Arm of Mudhoney. The two legends are most probably jamming this one in Heaven this instant, where the grunge gods meet once again.

Forming from the roots of a local Seattle band known as The Shremps, who toured around the early 80’s. They featured singer/drummer Cornell, accompanied by Kim Thayil who would replace bassist,  Hiro Yamamoto, who would keep in touch. Thayil moved with Yamamoto and Bruce Pavitt, founder of Sub Pop Records. After The Shremps split Soundgarden was formed in 1984, with Yamamoto returning to bass, Thayil on guitar and Cornell providing vocals/drums. Named after a wind-channeling pipe sculpture, located next to Magnuson Park in Seattle, titled A Sound Garden.

In 1985  Scott Sundquist took over the drums so that Cornell could concentrate on singing. Matt Cameron became the permanent drummer a year later and the first EP, released via Sub Pop was  “Screaming Life” (1987) with the second being, “Fopp” (1988). The debut LP, “Ultramega OK” (1988) was released via SST records with the bands first video for the single, Flower.

The follow-up, “Louder Than Love” (1989), was the debut for A&R records and featured three singles, Loud Love, Get on the Snake and Hands all over.

The song Heretic also featured on the soundtrack to the Christian Slater film, “Pump Up The Volume” (1990). The Loud Love single sparked another EP, “Loudest Love” (1990), with a video to accompany it.

Cornell‘s friend and old roommate Andrew Wood (Motherlovebone, Malfunkshun) died from a heroin overdose in 1990, in which Cornell wrote two songs Reach Down and Say Hello to Heaven once he returned back from touring. Guitarist Stone Gossard and bassist Jeff Ament who were two remaining members of Mother Love Bone, decided to collaborate with Cornell, forming Temple of the Dog. Mike McCready joined as a second guitarist with Cameron on drums. All members of Temple of the Dog, excluding Cornell, would later become Pearl Jam with a vocalist from Seattle by the name of Eddie Vedder. Vedder featured on the Hunger Strike single which was accompanied by a video for the self-titled LP in 1991.

Badmotorfinger (1991) saw three singles with new bassist Ben Shepard replacing Yamamoto.The first single to drop was Jesus Christ Pose, which caused much controversy. It remains to be a fan favourite to this day and is a song covered at most gigs. The distinct guitar of Thayil was used for the intro of Channel V’s Heavy Shift.

Johnny Cash covered Rusty Cage, on his Unchained (1996) LP, which was an unlikely choice. It is interesting to listen to both tracks in both forms of grunge and country, with Cash covering the latter. It was the final single released off “Badmotorfinger” in 1992, a year after its release.

“Superunknown” (1994) was the fourth LP released, proving toe be a success with the release of five singles. The lyrical style of Cornell will be greatly missed with greats such as Black Hole Sun, My Wave, Fell on Black Days, The Day I Tried To Live and Spoonman.

The Day I Tried To Live

“Down on the Upside” (1996) would be the final album after a breakup the following year, due to inner turmoil within the band. The album was softer than earlier material, however, an array of more promising singles was present with the likes of Pretty noose, Burden in my hand, Blow up the Outside World and the split featuring Ty Cobb/Rhinosaur.

Burden in My Hand

Blow up the Outside World

Cornell released a number of solo records with “Euphoria Morning” (1999) and most recently with “Higher Truth” (2015). With a diverse style from covering the Michael Jackson classic, Billie Jean on “Carry On” (2007) to his collaboration with Justin Timberlake and Take Me Alive, to the follow-up  “Scream” (2010) which was produced by Timbaland. Returning with a live acoustic album, entitled  Songbook (2011), covering everything from Soundgarden, Mother Love Bone, Temple of the Dog to Audioslave and Led Zeppelin. Here we will look at a clip from his debut solo record to his most recent.

Cornell joined up with guitarist Tom Morello, bassist Tim Commerford, and drummer Brad Wilk, all remaining members of Rage Against The Machine, after vocalist  Zack de la Rocha left in 2000, forming Audioslave. The band released three studio albums including the self-titled debut, “Audioslave”(2001), “Out of Exile” (2005) and “Revelations“ (2006). The band broke up the following year.

Cornell broke news in 2010 that Soundgarden had reformed and “King Animal” (2012) was released via Vertigo records. Singles for Been Away Too Long and By Crooked Steps were released.

Temple of The Dog reformed touring in 2016 in celebration of the 25th anniversary of their self-titled album. I will leave you with the song Cornell had written for his friends, with the 2016 recording.

Cornell sadly died yesterday at the age of 52. We mourn the loss of one of the greats who will be sadly missed. Thoughts are with the Cornell family and friends through this tough time.