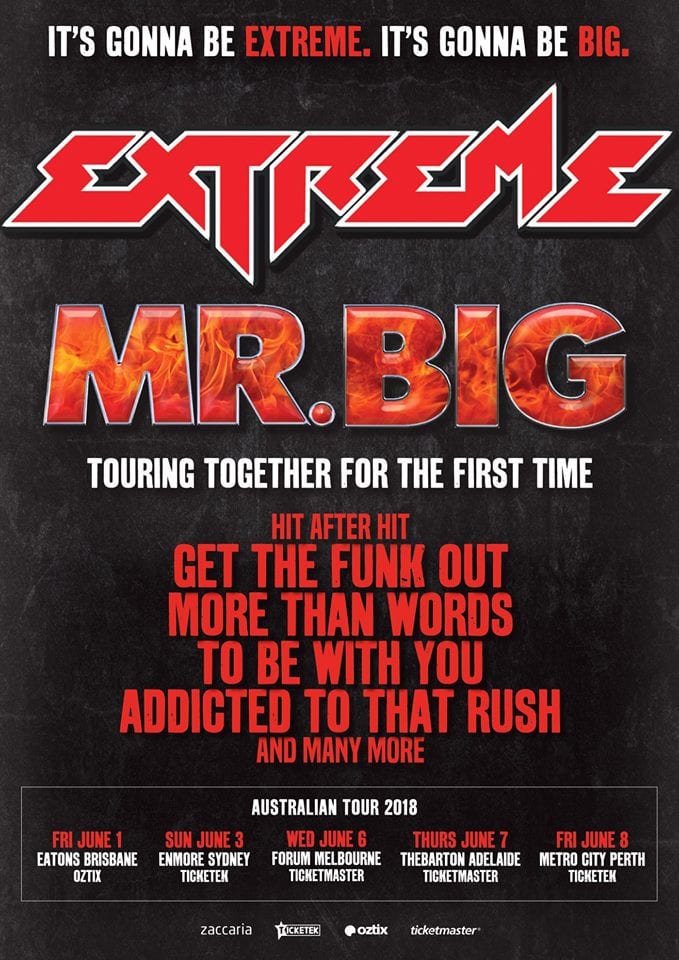 A stellar double header that has two legendary guitar virtuosos between them, is heading to our shores in June 2018.   Grammy-nominated Extreme, one of the most successful rock acts of the late 80s & 90s, and hard rock’s original supergroup Mr. Big will be touring capital cities mid-year to showcase their exceptional musical prowess.

Extreme became one of the most prosperous bands of the early 90’s when the biggest hit of their career, “More Than Words”, rocketed to No. 1 on the Billboard Hot 100 in 1991.  The track was lifted from their double platinum selling second album release, Extreme II: Pornograffitti (A Funked Up Fairy Tale).  “Hole Hearted”, also on this album, reached No. 4 on the Billboard Hot 100.  While these ballads were Extreme’s biggest commercial hits, they were not indicative of the band’s trademark heavy rock style which makes up most of their sound.  Decadence Dance and Get The Funk Out are heavier tunes that are more representative of them and which also made it into the Billboard Hot 100.

Extreme have sold over 10 million albums worldwide since their formation in 1985.  They’ve released six studio albums, a greatest hits set, and a recent live DVD.  The band had initially described their music as ‘funky metal’, but it would evolve much more in the mid-90s by blending classic rock influences with post-grunge and alternative rock.  The band’s popularity is fuelled by guitar mastermind, Nuno Bettencourt’s signature style, Gary Cherone’s resonant vocals and socially conscious lyrics, Pat Badger’s rock-solid bass, and the hard-hitting Kevin Figueiredo on drums.

Formed back in 1988, Mr Big forged its place in rock history combining trademark “shredding” musicianship with awesome vocal harmonies.  The well-respected group stood out from the rest due in part to their skilfull musicianship.  Mr. Big produced numerous hit songs that ranged across a wide array of rock genres – be it ballads, heavy metal, or blues rock. Their hits included “Alive and Kicking,” “Just Take My Heart” and the chart-topping ballad “To Be With You” (Billboard Hot 100 number one single in 15 countries for weeks, in 1991), propelling the band to huge international success and multi-platinum record sales.

Their ninth recent album release Defying Gravity showcases the best of what Mr. Big has to offer.  Several of the band members are well-respected virtuosos within the music industry.  Billy Sheehan has won many ‘Best Bass Player’ awards in numerous magazines, including an unprecedented 14 years in a row from Player Magazine.  Paul Gilbert is recognized as one of the top guitarists of his generation.  The veteran American band, fronted by lead singer, Eric Martin, continue to be a touring force playing to sold-out shows around the globe.

Get ready to quench your rock thirst – this tour is a must-see event for music enthusiasts!