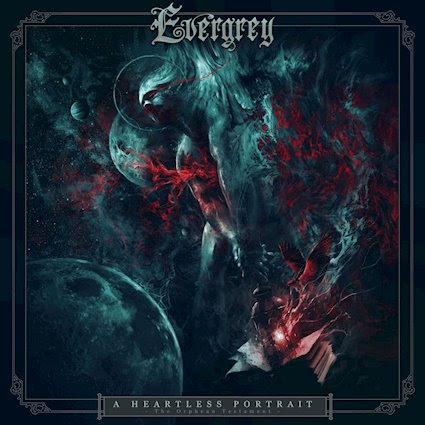 The new album from Gothenburg’s EVERGREY, A Heartless Portrait (The Orphean Testament), is the thirteenth studio LP in the bands 25 years together and their legacy is as strong as ever. Over the decades they have crafted skilfully executed prog metal powered by founder and frontman TOM ENGLAND‘s astonishing vocal range and its infusion to the talented virtuoso of musicians it surrounds. With the album being the first they’ve released on NAPALM RECORDS, it will be interesting to see if the Swedish five-piece still have it in them to create thought provoking metal masterpieces.

Opening track Save Us starts things well, with ambitious basslines and sporadic drumming kicking things off with a boom. For such an intense intro, they compose themselves nicely and Englund finely picks the notes used with expertise throughout the song. The emotion produced with each plea sounds as if to tell a different story every time.

The soliloquy of Midwinter Calls sympathizes with depression in anthemic fashion, complete with audience participation recorded on tour. The drums excel with accompaniment by an onslaught of guitars to ensure the listener they can scream their lungs out as they thrash about to a high quality composition. In Ominous, Englund begins the track with sombre vocal acrobats. Atmospheric guitars and layered vocals helm the verses as the drums mold the rhythm in this pacing track.

The next song Call Out the Dark has my favourite guitar solo of the album, of which there are an abundance. It’s so polished, filled with squeals and tremolo. The guitars stand out with amazing chunky riffs and speedy solos all throughout this album. Bookended by a lullaby pastiche, Call Out the Dark churns along well with glorious explosive choruses. Big IRON MAIDEN energy.

The Orphean Testament thrashes ahead with one of the more innovative riffs and some of the most introspective lyrics on A Heartless Portrait. The general method of the band is to play thumping hard metal with mind melting precision and sing poetic lyrics from a baritone of broad range, throw in a synth laden track of isolation like The Great Unwashed for good measure and you’ve got yourself a fun time.

Blindfolded is a melody of vitriol guitars and harmonising keyboards that match the gruff of the vocals perfectly. Once again Englund exudes earworm capabilities with hooks I’ve been singing all week. The band save the inevitable ballad in Wildfires for the final track of the album. The track is a lamentation in the time of the apocalypse and remorse and tightly ties the bow on the record with class.

Evergrey have certainly proved they can write catchy, fail-safe metal seemingly with ease with the release of A Heartless Portrait. With their ability to perform well structured prog metal masterfully with futuristic guitar solos, expressive rhythms and cry-your-heart-out choruses they present themselves as a stadium standard, which isn’t a stretch as this album would fit snug in any arena.