This will be the first time the band has toured Australia in their 35 year career and their first show kicks on in Perth on Wednesday, May 16!

The bands most recent album, 2017’s Walk The Earth has received fantastic reviews the world over and they have just released a new music video for the track, The Siege. The Zeppelinesque riff gives way to Deep Purple like keyboards and a catchy as hell chorus!

The Australian shows will be very special and in a world first for the band, will consist of two sets!
Over TWO HOURS of music with a short break in the middle.

And will feature fan favourites from albums including Rock The Night, Carrie, Cherokee, Heart Of Stone, Danger On The Track, Superstitious, Ready Or Not and Open Your Heart

Plus songs from their first two albums which very rarely get played live, including Scream Of Anger and Seven Doors Hotel, all the way through to their current and 11th album
Walk The Earth!

Featuring the classic lineup of Joey Tempest (Lead Vocals), John Norum (Guitar), Mic Michaeli (Keyboards), John Leven (Bass Guitar) and Ian Haugland (Drums),
Europe have achieved total worldwide sales in excess of 25 million, with the 1986 mega-hit The Final Countdown reaching No1 in 25 countries.
On touring Australia Joey Tempest adds “We are so excited to be touring Australia for the first time! It’s something we always wanted to do, but we just couldn’t make the schedules work before. But now…its going to happen and we can finally hook up with our friends down under!”
TOUR DATES
Wednesday, May 16: Concert Hall, Perth
Friday, May 18: Thebarton Theatre, Adelaide
Saturday, May 19: Palais Theatre, Melbourne
Tuesday, May 22: Enmore Theatre, Sydney **

Wednesday, May 23: The Tivoli, Brisbane 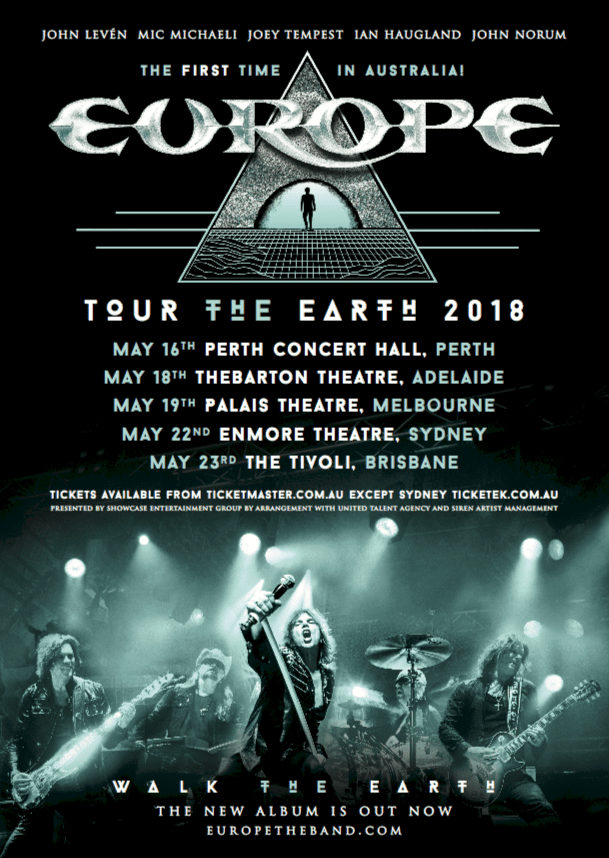