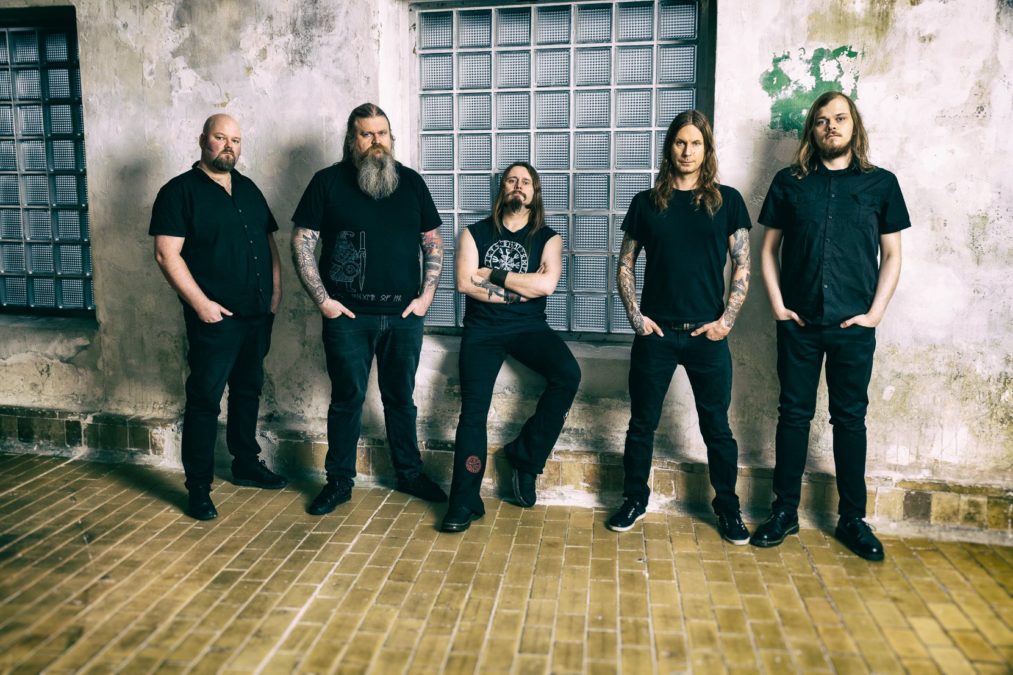 Norwegian neo-traditional progressive black metallers Enslaved have continuously and consistently refused to be a band that can be pigeonholed.

Throughout their twenty five year journey through the realms of extreme metal creation and artistic impression Enslaved are true expressionistic artisans that paint stunning musical murals with broad multi-faceted brush strokes. With their latest release (number fifteen in their back catalogue for those that are counting), Utgard, Enslaved’s exhibition of beautifully bleak metal creation just becomes more imaginary and brilliant. Founding member Ivar Bjørnson sat down with HEAVY’s Metal V to discuss their history amongst other things plus Enslaved’s desire to broaden their sound; “Maybe we expanded or exploded, who knows what the right words are, for us it was really important and became pressing after just a few years to include more influences from music that we were listening to. We are definitely metalheads and that is the life that we live, but there is also a bunch of other stuff that we’ve been listening to and makes us react as music listeners and we didn’t see any reason why we shouldn’t include that…that was the spirit of the scene that we came from. Now people are talking about traditional Black Metal referring to early Darkthrone, Mayhem and so on, but those bands were also heavily mutating what they were influenced by. They came from the first wave, Celtic Frost, Bathory, Venom all that stuff but it was quite different to what they were doing so we just saw it as a natural thing and bastardised that too into something new.”

Straying from the left-hand path or whatever realm of normality that Enslaved reside within, a further 90° shunt stops us in our tracks with the latest video release of the noir / 8bit / electro inspired track “Urjotun”. Bjørnson elaborates on this perfect anomaly found within the album – “I’m a big fan of the 70’s synthesiser masters like Klaus Schultz because it is such a heavy landscape that they are making with their music which really reminds me of what I experienced when I heard the first black metal albums that really hit me hard! The same of what was going on in the Eighties, what I was becoming aware of as I was getting a little bit older; whether it was post-punk or proto-goth…bands like Joy Division or especially Killing Joke, what these bands were doing, just really resonates with me and at the point when I was about to write the “Urjotun” song it just felt like the right moment to translate that vibe and energy…it’s got something really bleak but yet really powerful.”

The dichotomies of Enslaved progressive elements not only surrounds the band’s soul but there is also the ever-present ethereal blanket of bleakness that encompasses the black metal soul as a whole. Regardless, Enslaved also carries with them the purity of uplifting hope. Metal V asks Ivar if this is intentional in what the band are trying to do. “I think that is what we’re doing, but I’m not entirely sure what we’re trying to do because we try to avoid thinking about that as we are bicycling around the landscape. It is about the experience of something that is whole and complete. There are very few bands that can do pure aggression forever without losing its edge and sharpness. We need something to contrast (the heaviness) with, to maintain it and that goes both ways, if you have the ability to purvey the aggression and bloodthirst, it will make those mellow and softer parts become more genuine.”

Within Enslaved’s pallet of a vast array of colors and shades is the clear evidence of their black metal roots yet obvious influences drawn from outside of the metals grasp. Ivar expands upon the necessity of refusing to be labelled as merely the former. “I think what we are doing is…there is a mourning in a sense of how we are dealing with this Norse and pre-Christian, pre-religious philosophy, there is mourning and aggression to how the world is today. Mourning and sorrow become powerless, impotent in a sense so we would like more to focus on the excitement and joy of how things can be and be turned around…That’s what I am experiencing as uplifting and that’s what’s sneaking into the music. The world might be shit but there is also the potential for something else!”

Further elaborating Ivar discusses Enslaved’s material, after HEAVY mentions the band is heavily influenced by their Norwegian folklore, “[Our] desire is to share our thoughts, outlook and very much avoid preaching or missionaring. It’s very important for me to uphold the rights of those listeners and fans who want to have Enslaved as something that is musical and poetic. You don’t have to go in and sift through the meanings and agree or disagree. I’ve experienced that a lot as a listener myself being confronted by people who mix a lot of things into their music and sometimes it feels like I’m being deprived of my possibility to associate and connect with it personally. I have my life story and they (Enslaved’s audience) have their life story and I don’t want to thread mine over people’s heads but I definitely want to share, if they’re interested.”

In the full audio interview, Ivar discusses coming back to naming some of Enslaved’s songs in their native Norwegian language, utilising the feeling of the sounds of words and their similarity to music in getting feelings and expressions across to the listener. But also the ways the inhabitants of the world are being oppressed and denied equality thanks to the greed of a vast minority.