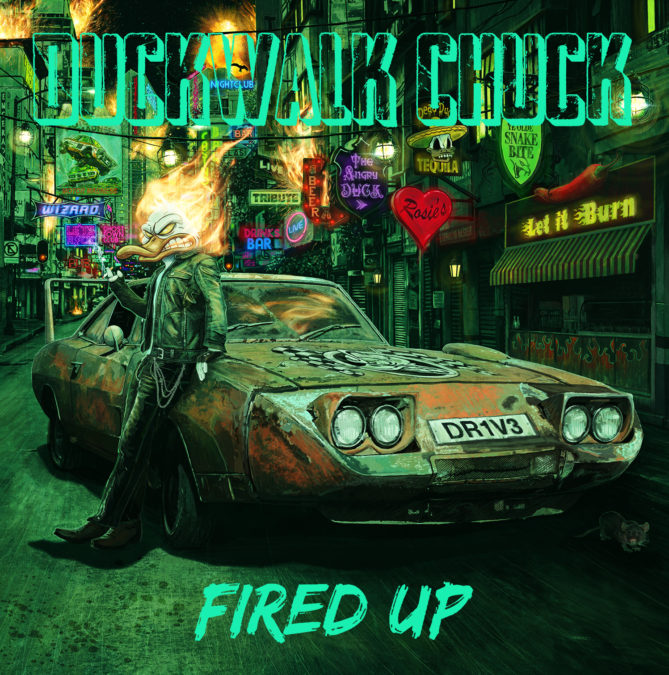 How pleasantly surprised I am to be given the opportunity to review a band that isn’t post this or core that, just plain old rock ‘n’ roll. I guess that’s what happens when you’ve been around for 20 years and don’t feel the need to slot into the sub-genre of a sub-genre. Let’s see how the Norwegian lads Duckwalk Chuck, what a name by the way, square up in the rock ‘n’ roll game.

Opening track All Fired Up is not a cover of the Tina Turner cover of the Pat Benetar cover of the Kerryn Tolhurst song of the same name, nor will it likely appear as the theme song for the NRL anytime soon. What it is though is a rocking good classic rock ‘n’ tune compete with lyrics about leather and studs and some gang vocals in the choruses. Classic rock riffing, rolling bass lines, four to the floor drums and dirty raspy vocals give us exactly what we’d expect from a rock ‘n’ roll song. Maybe Guns ‘N’ Roses could take a lesson from this before they release another track like that absurd turd they dropped on us a couple of days ago.

Criminal Man backs off the pace a little, but still maintains the rock ‘n’ roll vibes which I’m expecting throughout this album. Lead guitar breaks and solos litter the track, just in the right places, and just enough of them. It is a short and simple song, which is all it needs to be to keep you rocking and a rolling.

Next up is Ghost Town, a blues track. This is not something unusual for a rock ‘n’ roll band, as most rock guitarists have deep seeded roots in early blues, or at least learnt the blues scales while trying to replicate their idols and influences. It’s the kind of track you could imagine playing in a rural pub while the local bushies and bikers are swigging a few
schooners on a Friday afternoon after a tough week.

Who even knew Norway had rock ‘n’ roll bands? I thought Norwegian bands were all about the devil and burning churches. The devil does wear many masks though, and vocalist Arvid lets us know ever so nicely that he is the devil and he doesn’t need a mask in the next track I’m The Devil, another blues based slow rocker.

It’s Only Rock ‘N Roll picks up the pace again, and as it tells us, it’s only rock ‘n’ roll, which is exactly what it is. Not much more that can be said about this one, so let’s move to the next track Motor Madness which is all about guitars, simplistic driven blues guitars. This tracks about as complex as an AC/DC track, but unlike AC/DC it manages to sound different to every song before it.

Reckless Driver takes over from where Motor Madness left us, with some more rocking guitar riffs. This song actually reminds me of something in particular, but I can’t quite pinpoint it. But who cares, it rocks and it rolls with a couple of guitar solos in between for good measure.

Back to the blues we go with Rosies, or to Rosies, or something like that, and apparently we’ll “have ourselves a time” as the rasp vocals point out. This is a slow roller which builds ever so slightly into a slow and basic guitar solo mid song. This is exactly how to not overdo it, just because you can.

Shut Your Lights and Thirsty Dog bring us to the final track World On Fire with a hole heap more rock ‘n’ roll. The final track winds back a little to bring us down from our rock ‘n’ roll journey, and we again hear the gang vocals make an appearance throughout the song’s choruses. A well-executed, and not overplayed guitar solo bridges the second chorus to the final verse, and we end on the gang vocal chorus advising us that the world is on fire.

Rock simplicity best describes this album, but not so simple that is sounds like the first, last and every AC/DC album in between. I may need to listen to some more of their work though to make sure they aren’t using the same formula over and over again. Not that it would matter, because it works, and it obviously has for the 20 years that these guys have been writing and performing rock ‘n’roll.

Fired Up is released on September 17