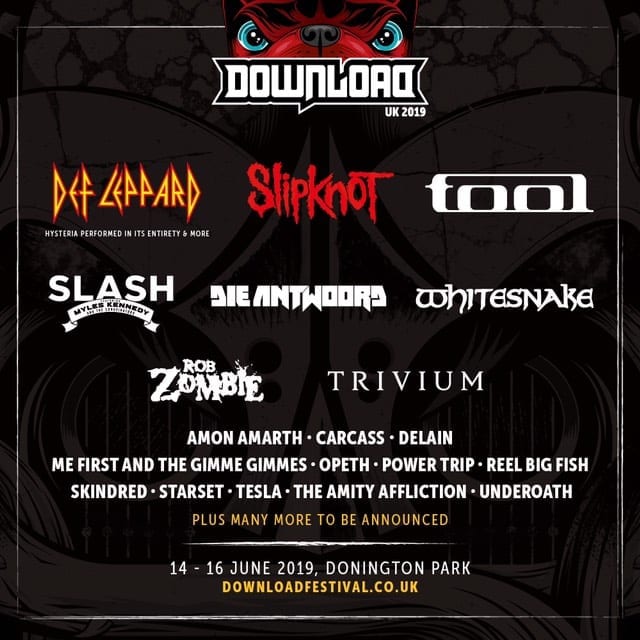 MANY MORE TO BE REVEALED

TICKETS ON SALE AT 2018 PRICES

Download Festival, the world’s premier rock event has announced Def Leppard, Slipknot, and Tool, as its 2019 headliners, plus SEVENTEEN of the world’s most exciting bands in rock, pop punk, hardcore and metal. The three-day festival takes place on 14 – 16 June 2019 at the spiritual home of rock in Donington Park, Leicestershire. Tickets will be on sale 2pm on Thursday 25th October at 2018 prices until Tuesday 6th Novemberdownloadfestival.co.uk/tickets.

Classic rock powerhouse Def Leppard make their spectacular return to headline the Main Stage, playing the seminal album Hysteria in full and more, in what will be their only UK appearance of 2019. The forerunners of the new wave British heavy metal movement have sold over 100 million records and will rip through a full-throttle stadium-sized show, built on a foundation of classics like ‘Pour Some Sugar On Me’, ‘Animals’, ‘Rock Of Ages’ and countless more.

Joe Elliott: “We are delighted to be going back to headline Download in 2019! The festival has a very special place in our hearts and it’s such a great place to play. We will be playing Hysteria in full – yes, in full! – plus a load more of the hits, and we are going to put on a very special show for our UK fans. Can’t wait to see you all there!”

Masked metallers Slipknot will also headline, where they stand as one of the most defining acts of the last two decades. The sheer power of Slipknot has been proven with their pivotal appearances at the festival going down as things of legend. With a back catalogue of rock club classics ‘Duality’, ‘Spit It Out’, ’Before I Forget’ and ‘Psychosocial’, Slipknot’s elite status and enduring relevance makes them one of the most exciting acts in the world today.

An appearance thirteen years in the making, Download is pleased to announce that Tool will be making their grand return to headline the festival. The Grammy award winning, multi-platinum, prog-metal titans are set to take fans on a grandiose career spanning journey from classic albums Undertow, Lateralus, and 10,000 Days.

Living guitar god Slash will be teaming up with Myles Kennedy and The Conspirators to whip the crowd into a frenzy with the axeman’s signature riffs and one of the best vocalists in the world. Fresh off the release of their third album Living The Dream, rock fans will be doing the same when witnessing the dream line up hit the stage. ‘Here I Go Again’ hit makers Whitesnake will take to the stage with the legendary David Coverdale on vocals.

David Coverdale: “Once again, we’ve been honoured to be invited to participate in the legendary DOWNLOAD 2019…Can’t Wait To See You All & Kick Arse Together!!!…So Ready 2 Rock!!!”

Horror rock legend Rob Zombie will turn Download into his trademark twisted carnival with stomp-laden classics and new tracks. Trivium are coming back to take Download by the horns with their stomach-lurching, roaring metal as one of the genres most prolific and consistent acts. Swedish death metallers Amon Amarth known for their Viking lyrics make their return to Download.

Carcass are the vital, visceral death metal driving force that should be on every metal head’s bucket list. Revered Dutch symphonic metal outfit Delain are ready to slay, led by the world-class frontwoman Charlotte Wessels. Known for their unique take on hip-hop as well as their South African zef style, Die Antwoord are a welcome addition to Download. Also added are punk rock covers supergroup Me First And The Gimme Gimmes featuring members of NOFX, Foo Fighters, Lagwagon, and Swingin’ Utters delivering their trademark rapid-fire interpretations.

Download Festival favourites Skindred never fail to raise the roof with their ragga metal. The unmatched energy and exuberance of frontman Benji Webbe is sure to see the return of the Newport Helicopter originating at Download 2011. The hotly-tipped sci-fi, conceptual rockers Starset also join the line up with their ambitious gigantic rock set for stadiums in the future. And Tesla will serve up classic hard rock anthems in mammoth portions.

Queensland metalcore veterans The Amity Affliction have climbed the ranks with their syrupy hooks amongst melodic metalcore and ferocious breakdowns. Post hardcore pioneers Underoath will bring light and shade to Donington, as the trailblazers make their first appearance back at the festival since 2005.

“We’re incredibly excited to announce three legends as Download 2019 headliners. It’s not quite been 10,000 Days since we have been able to indulge in one of our favourite alt-rock bands, but after thirteen years I am thrilled to announce Tool are finally making their long-awaited return to Download. Renowned for being one of the best live bands on the planet due to their one-of-a-kind performances, Slipknot are an incredible addition to the main stage. Last but not least, I am honoured to welcome true Rock N’ Roll legends Def Leppard to Download who bring with them a UK exclusive chance to see Hysteria played in full.”

Download Festival is the home of rock music and takes place on the sacred grounds of Donington Park, which have been associated with rock since the eighties. The festival attracts icons of rock and metal to its main stage, plus some of the best and hottest new acts in the world. AC/DC, KISS, Metallica, Black Sabbath, Guns N’ Roses, Rage Against The Machine, Linkin Park and many more have all headlined its main stage.

Me First And The Gimme Gimmes

Tickets for Download Festival will be available from downloadfestival.co.uk/tickets

Extras including parking and lockers can be purchased during the booking process or as a standalone after you’ve purchased your ticket. Limited edition Download 2019 Zippo lighters will also be available to purchase alongside your festival ticket. Zippo windproof lighters have become the ultimate accessory for making a bold statement in music and are the perfect way to show your appreciation for your favourite band; with a classic Encore moment. Backed by its famous lifetime guarantee, a Zippo is a lighter for life.