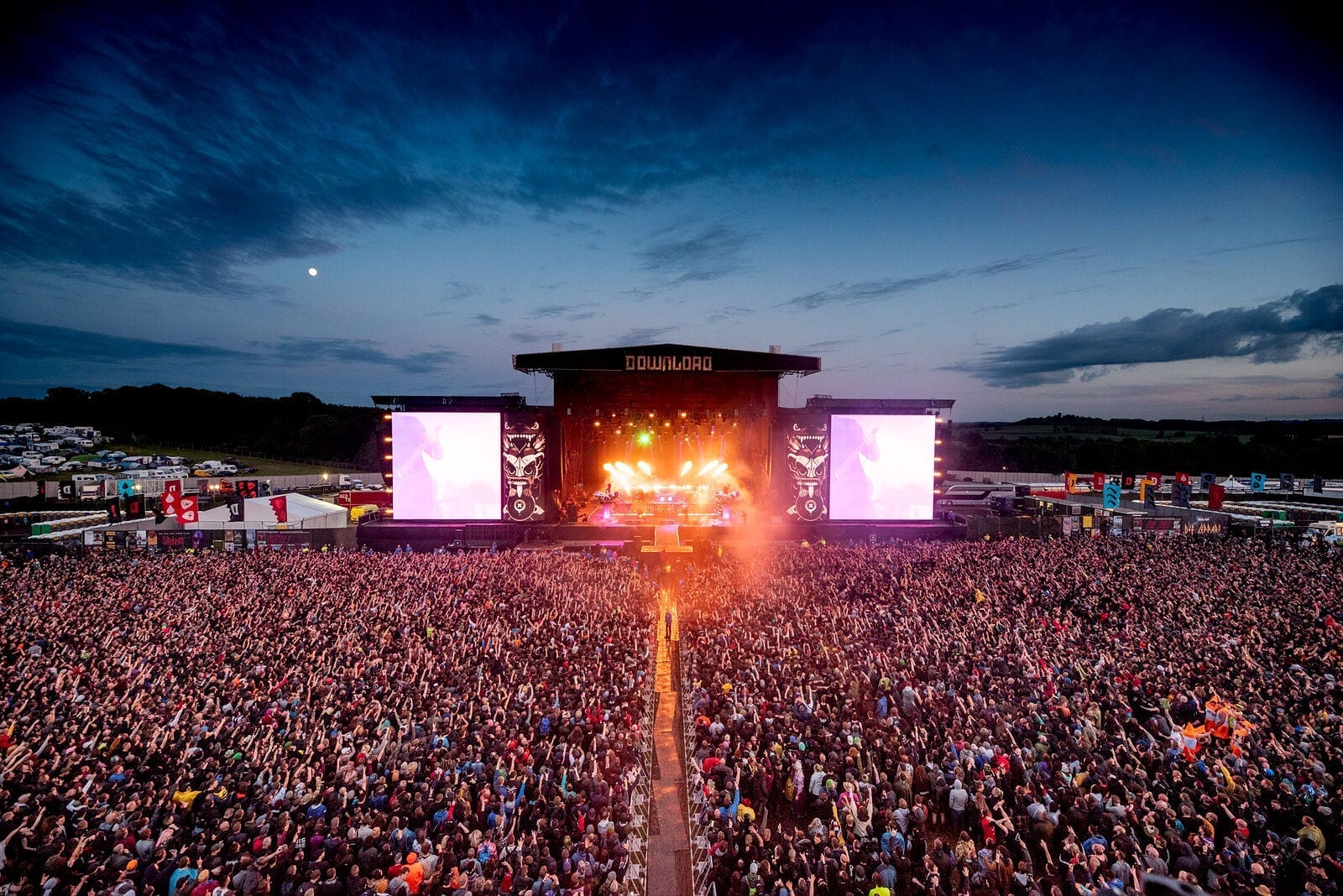 The world premier rock and metal event took place as 80,000 rock fans descended to the hallowed grounds of Donington Park, Leicester every day across the weekend for
the 17 th  annual Download Festival. The capacity crowds witnessed the triumphant
return of British rock icons Def Leppard playing their multi-platinum
album ‘Hysteria’ in full. The sun came out for Saturday, as headliners Slipknot brought
the heat with an uncompromising set of pure metal and after a 13-year absence the
alterna-prog-metal titans Tool hit the stage for a historically transcendent return.
Tickets for Download 2020 are now on sale.

With the initial rainfall cleared up by Saturday afternoon, the atmosphere was electric
as waves of fans once again lived up to the moniker of what is widely regarded as the
UK’s friendliest festival, celebrating inclusivity, self-expression and a lot of
headbanging.

Early bird ticket holders arrived from Wednesday, taking full advantage of a whole
host of entertainment and activities before the main festival opened, including the
Side Splitter Comedy Tent, Metal Cinema and the annual official Air Guitar contest
where the winner will be flown out to Sweden to compete in the world final, chosen
by guest judge and WWE Superstar Eric Bugenhagen. This year also included the
introduction of the Mind The Dog mindfulness sessions and the return of the onsite
supermarket, Co-op, making sure essentials were on hand for all.

The first full day of music saw the crowd energised, undeterred by a poor weather
forecast and ready to rock out. Rob Zombie delivered a stunning second stage
headline performance – tearing through rock club floor fillers ‘Living Dead Girl’ and
‘Dragular’ with gusto and undead theatrics aplomb. Californian rockers Eagles Of
Death Metal roared through a set packed full of hits and covers with effortless
charisma and infectiously feel-good vibes. The Interrupters brought the party in
signature ska punk style, while Mongolian metal band The Hu broke new
ground. Whitesnake dished out hits from one of the greatest back catalogues in rock
‘n’ roll history like a well-oiled rock machine, before guitar hero and living
legend Slash alongside Myles Kennedy And The Conspirators gave a rock masterclass
whipping the crowd up for the arrival of headliners Def Leppard. 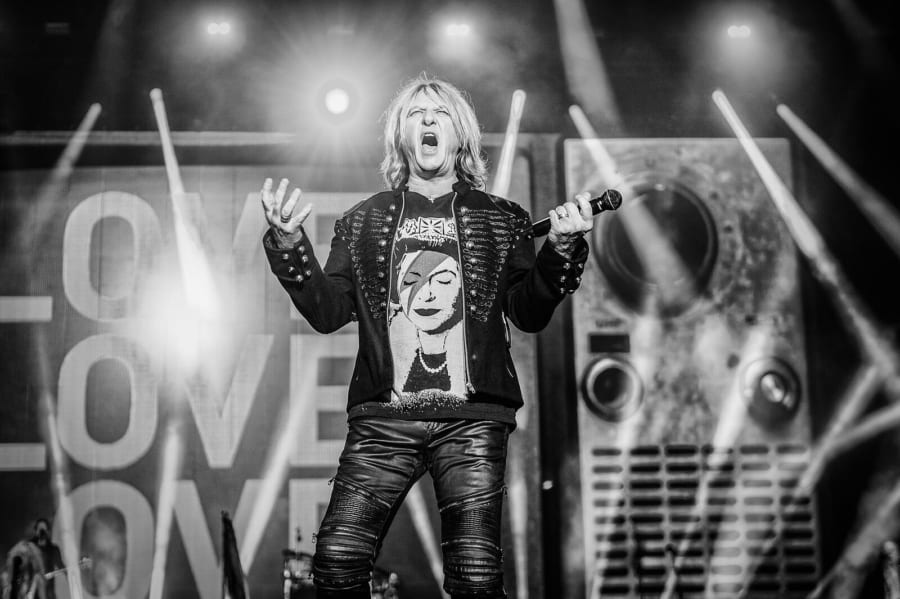 Def Leppard made their welcome return to the sacred grounds on Donington and
brought their spectacular and seminal Hysteria tour in tow. Joe Elliot and co. were on
form with the ultimate slick, polished, singalong filled set, flanked by giant screens as
they belted out anthem after anthem including ‘Animal’, ‘Let’s Get It Rocked’ and
‘Pour Some Sugar On Me’ cementing their status as icons and setting the bar
incredibly high for the rest of the weekend.

Throughout the weekend, WWE NXT provided non-stop high impact action in their
full-size wrestling arena. Capacity crowds were amazed with displays of skill,
athleticism and high-flying manoeuvres as the most electrifying names in sports
entertainment delivered the full NXT experience to Donington Park.

With masked metallers Slipknot set to hit the stage on Saturday evening anticipation was in the air, it

was an international affair with the much-hyped New Zealand Maori
metal band Alien Weaponry opening the main stage to a huge crowd – reminiscent
of Trivium’s opening slot in 2013 and set the scene for their triumphant set in 2019.
Hard rockers Halestorm stepped up for their debut second stage headline set, fronted
by the powerful Lizzy Hale – this was a watershed moment which saw their brand of
ferocious guitar driven rock receive a heroes’ welcome and rapturous reception as
they closed the stage. South African Zef rappers Die Antwoord mixed it up with heavy
beats, punk attitude and rapid-fire flows. Welsh ragga metal heroes Skindred brought
their trademark Newport Helicopter to the fields, Simple Creatures featuring
members of Blink 182 and All Time Low made their UK festival debut and bonafide
metal pioneers Carcass laid waste to the Dogtooth Stage with pummelling riffs,
whipping the crowd into a suitable frenzy readying them for Slipknot. 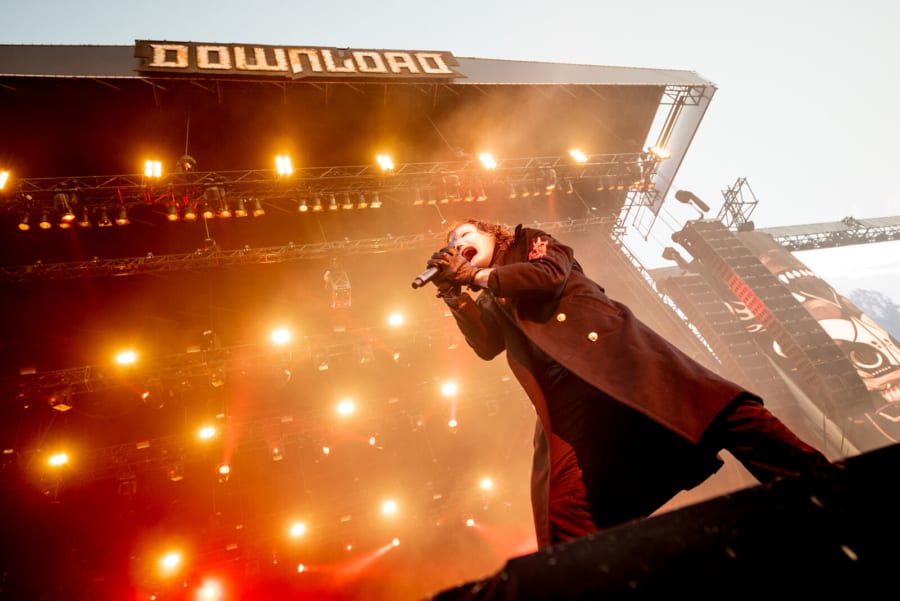 The impact of Slipknot on popular culture cannot be ignored and their enduring 20-
year career has seen them rise to a level which can only be described as phenomenal.
The band started as they meant to go on opening with the anthemic ‘People=Shit’ and
pulled no punches as they delved into a set of their heaviest hits and deep cuts
including ‘Psychosocial’, ‘(Sic)’ and ‘Spit It Out’ as well as tracks from their forthcoming
album ‘Not Our Kind’. On their third headline appearance Slipknot somehow raised
the bar again delivering their trademark frenetic stage show with ferocity as urgent
and relevant as ever, drawing the crowd together and giving the message of sticking
together as a family, with lead singer Corey Tayler proclaiming that out of all
festivals “This is the one that feels like home”

Download celebrated the success of the returning Eco Campsite sponsored by
Greenpeace which was filled to capacity and zero tents were left behind. Download
also sold out of all reusable water bottles, as well as 300,000 beer cups being reused.
Download Festival also lived up to their 2019 commitment of trialling plant-based
bottles and using bottles with a recycled content where these weren’t available,
setting them on course to be plastic free by 2021. 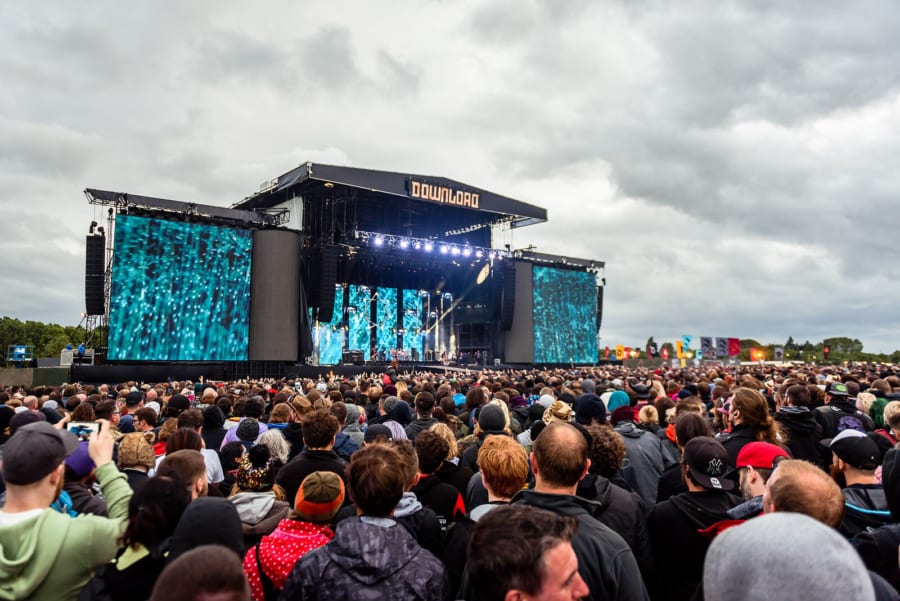 On Sunday morning fans were no less energetic bounding in the arena as the weather
continued to improve and the sun shone down on the famous grounds.
Underoath delivered light and shade on the main stage with a set of nostalgic classics
and new material, festival favourites Lamb Of God delivered a powerhouse set of
groove laden riffs and circle pits a plenty, Amon Amarth led the charge with a Viking
invasion and announcement of a brand new UK tour. Anthrax wasted no time,
opening with tracks ‘Bring The Noise’ and ‘Mad House’, and grunge
superstars Smashing Pumpkins made their Download Festival debut soaring through
iconic tracks ‘Bullet With Butterfly’ ‘Wings’, ‘Cherub Rock’ and ‘1979’. Thrash metal
pioneers Slayer hit the stage with a set forged in fire and fury, the kings of riffs incited
all kinds of mayhem for the very last time in the UK.
Setting the stage for a booking 13 years in the making – the mythical, inimitable
Tool closed Sunday nights proceedings in what was a dynamic, grandiose show which
Download fans have been screaming for since 2006.
Highlights of the 17 th  Download Festival will be broadcast on SKY ARTS on 6/7 July at
9pm.