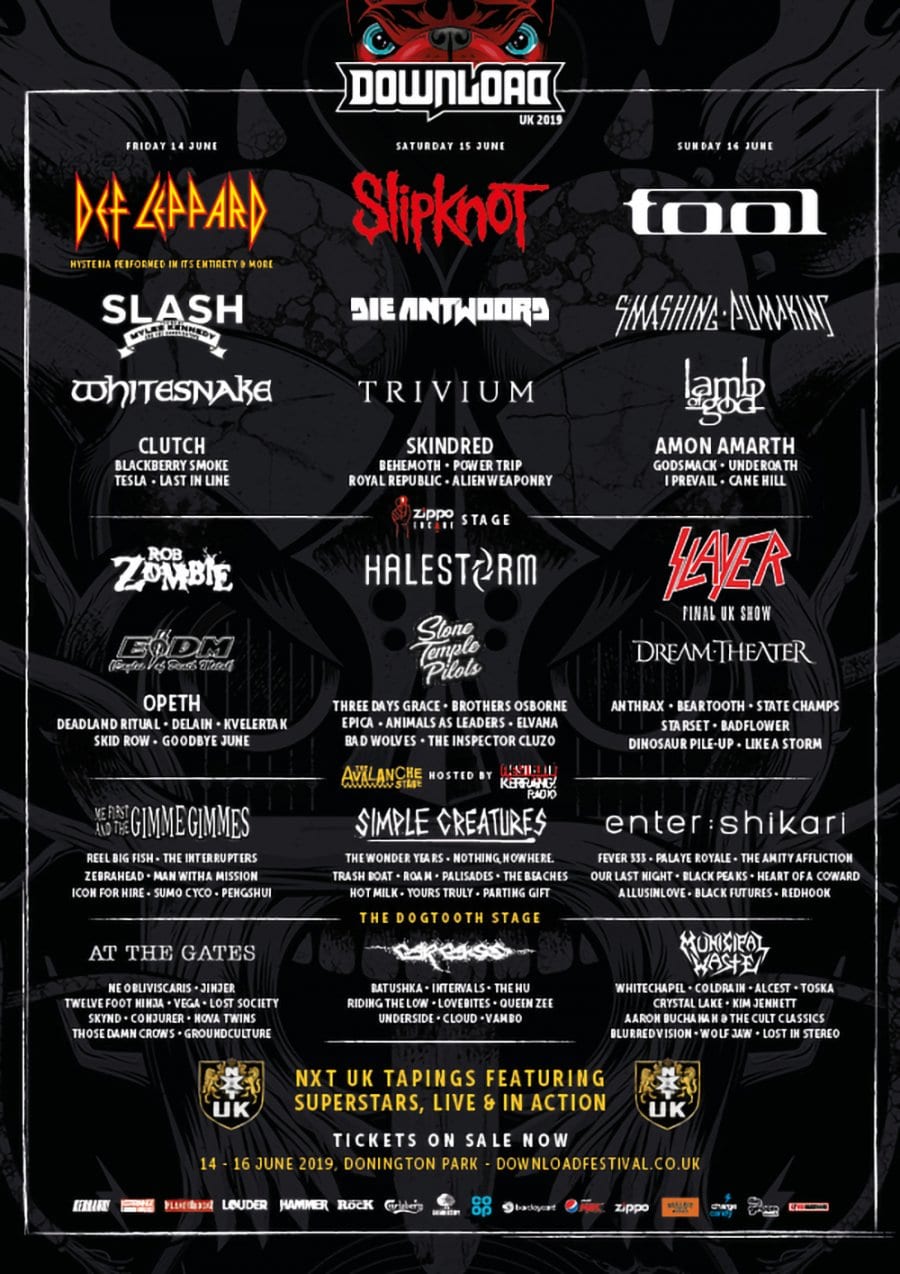 It’s that time of the year again. In just a few short weeks, 80,000+ fans will flock to Donington Park for the UK’s biggest Rock and Metal festival – Download! Whether you’re a Download veteran or Download virgin, we’re going to cover everything you need to know about this year’s festival. From headliners to bands you may be overlooking and to Download’s most controversial booking, plus festival hacks – we’ve got your back.

Hands up who likes classic rock! Then the main stage is the place for you. Whether you were around back in their heyday, or feel like you were born in the wrong generation, you’re getting a huge amount of guitar solos, power ballads, hair – so much hair – as some absolute legends take to the stage.

Whitesnake recently celebrated their 40th anniversary, and they have a new album to boot – Flesh and Blood – their 13th in total! Get ready for a set of melodic rock goodness, with classic rock anthems Hear I Go Again and Is This Love sure to go down with hardcore and casual fans alike.

After playing to a gigantic crowd at last years festival, Guns n Roses icon Slash returns, but this time with his side project, Slash featuring Myles Kennedy and the Conspirators. Three albums deep into their collaboration, it feels like they are now a draw for their own material rather than just getting to hear Slash and his classic GnR solos – you will get that, of course! Myles Kennedy is one of the best vocalists of this generation, and this set is not to be missed.

The mighty Def Leppard headline. Its always great when a British band headlines Download, and despite the band forming over 40 years ago they are still going strong. Performing their 1987 album Hysteria in full will no doubt thrill those of a certain age, along with the younger generation who will probably know more songs than they realise. Bands like this aren’t going to be around forever, and we should cherish them whilst they are still at the top of their game.

Dad rock not your thing? The Zippo Encore stage has a headline performance from Rob Zombie, who always brings a crazy stage show! Other big hitters on this stage include American rockers Eagles of Death Metal and Swedish Metal band Opeth.

Me First and the Gimme Gimme Gimmes headline the Avalanche Stage. Giving classic pop songs a Punk Rock twist, this is the place to sing a long to all those songs you pretend you don’t know and not feel ashamed about it. You can also check out punk rock veterans Zebrahead and skank away to Reel Big Fish.

The Dogtooth Stage has a headline set from Swedish Death Metallers At the Gates, with the stage throughout the day hosting most of the heavier bands on the lineup.

Friday Festival Hack – Know your bearings. Your well thought out plan of dashing between stages may or may not be possible – get a feel for the site and whether racing around the different stages is a realistic prospect.

Early Start – the first band you should see are Those Damn Crows (Dogtooth Stage), a nice dose of hard rock to ease you into the festival.

Don’t miss – Blackberry Smoke (Main Stage). American Southern style rock that will sound even better if we have sunny weather!

Slipknot headline the Main Stage. The Nu Metal legends have just announced that their 6th studio album We Are Not Your Kind will be released in August, and they’ll bring that new material and new masks as they tear up the main stage yet again.

The South African Hip Hop Group Die Antwoord have been hand picked by Slipknot as their main support. Its a move that has certainly polarised opinion, but the Download bookers know what they are doing – see how the bookings of the likes of The Prodigy and Chase and Status paid off in previous years.

New Zealanders Alien Weaponry have been handed a big slot, they’ll open the main stage. Heavily influenced by their Maori background – most songs are sung in the Maori language – they are one of the most unique bands you will see all weekend.

The lack of female fronted bands appearing at festivals is a bone of contention for many, and they’ll be pleased to see Halestorm headlining the Zippo Encore Stage. This is far from a token booking – Lizzy Hale is a fine vocalist, the band’s performance is always slick, and 4 albums deep into their career, they deserve this opportunity. A mixed bag of genre-defining bands fills up the undercard, with alternative rock represented by Stone Temple Pilots and Three Days Grace, country rock with Brothers Osbourne and a dose of symphonic metal in the shape of Epica.

How does a band with one EP to their name get to headline the Avalanche Stage? Well, that band is Simple Creatures, who you may or may not know comprise of All Time Low lead singer Alex Gaskarth and Blink 182 bassist Mark Hoppus. With their respective bands they would play much higher up the bill, so a great chance to catch them in smaller surroundings. Again, the stage hosts largely Pop/Punk Rock bands such as The Wonder Years, Trash Boat and Roam.

The Dogtooth Stage is topped by Carcass, with the extreme metallers supported by the likes of Batushka, and some really interesting upcoming bands such as Lovebites – a Japanese all-female metal band. The Hu hail from Mongolia, and use traditional instruments and throat singing mixed with heavy metal for a self proclaimed “hunnu rock” sound.

Saturday Festival Hack – If the toilets in the campsites are looking a bit grim, the Arena opens at 10am and you will be greeted with nice clean untouched toilets!

Early Start – Bad Wolves (Zippo Encore Stage) had one of the most viral Metal songs of recent times with their cover of The Cranberries Zombie.

After a 13 year hiatus, Tool are back in our lives and they headline the Main Stage. Their loyal fans have waited a long time for new material and live shows, their Download 2006 performance being their last on these shores. A notoriously private band, you also won’t find their music on any streaming services – a bold move these days and one which might see them miss out on a younger generation of fans. Recent shows have seen them perform 2 new songs – Descending and Invincible – which will be on there as yet untitled forthcoming album, due for release August 30th.

The Smashing Pumpkins are chief support. Hugely popular in the 1990s, most of the 2000s saw a revolving door of different band members and varying commercial success, but the original line up reformed for last years Shiny and Oh So Bright album. They are joined by groove metallers Lamb of God, Swedish melodic death metal band Amon Amarth and Nu Metallers Godsmack.

Slayer will bring their thrash metal to the UK for the final time as they headline the Zippo Encore Stage. After 38 years of recording and performing, they’ll bring the curtain down on their career next year, so if you’re a fan don’t miss this opportunity to see them one last time.
Dream Theatre will have to condense their usual near 4-hour stage show into a much shorter slot here and we get more thrash in the shape of Anthrax. The current and next generation of bands coming through are well represented as well, with the likes of Beartooth, State Champs and Starset.

Expect the Avalanche Stage to be bouncing where Enter Shikari headline, who always bring the intensity and offer a good alternative to the acts on the bigger stages. Backing them up you get the highly tipped Fever 333 who released their debut album earlier this year, Australian’s The Amity Affliction and Brighton band Black Peaks.

Municipal Waste bring a party thrash headline slot to the Dogtooth Stage, while Whitechapel and Japan’s Coldrain are the stages other highlights.

Sunday Festival Hack – Good news! You’ve saved enough money to pick up some Merch! Bad news…the best designs tend to sell out earlier in the festival, so if you see something that you like don’t hesitate!

If all that isn’t enough for you, a wide range of entertainment is available in both the Campsite Village and the Arena.

If you’re into Wrestling, you’ll no doubt check out at least one show from WWE NXT. Here for the 4th year running, this time they are filming for their NXT UK Show which is broadcast on the WWE Network. As well as their UK Roster, you’ll also get to see NXT Superstars such as Adam Cole and Kyle O’Reilly of The Undisputed Era. You can also check out Demolition Download for some full contact, medieval battles!

The Village plays host to various activities ranging from Metal Yoga to the UK Air Guitar Championships! You can take in some stand up comedy at The Side Splitter Stage, with the likes of Jim Breuer and Ed Gamble. The Doghouse will blast out tunes until the early hours for those who like to party all night long!

We’ll see you in the pit!