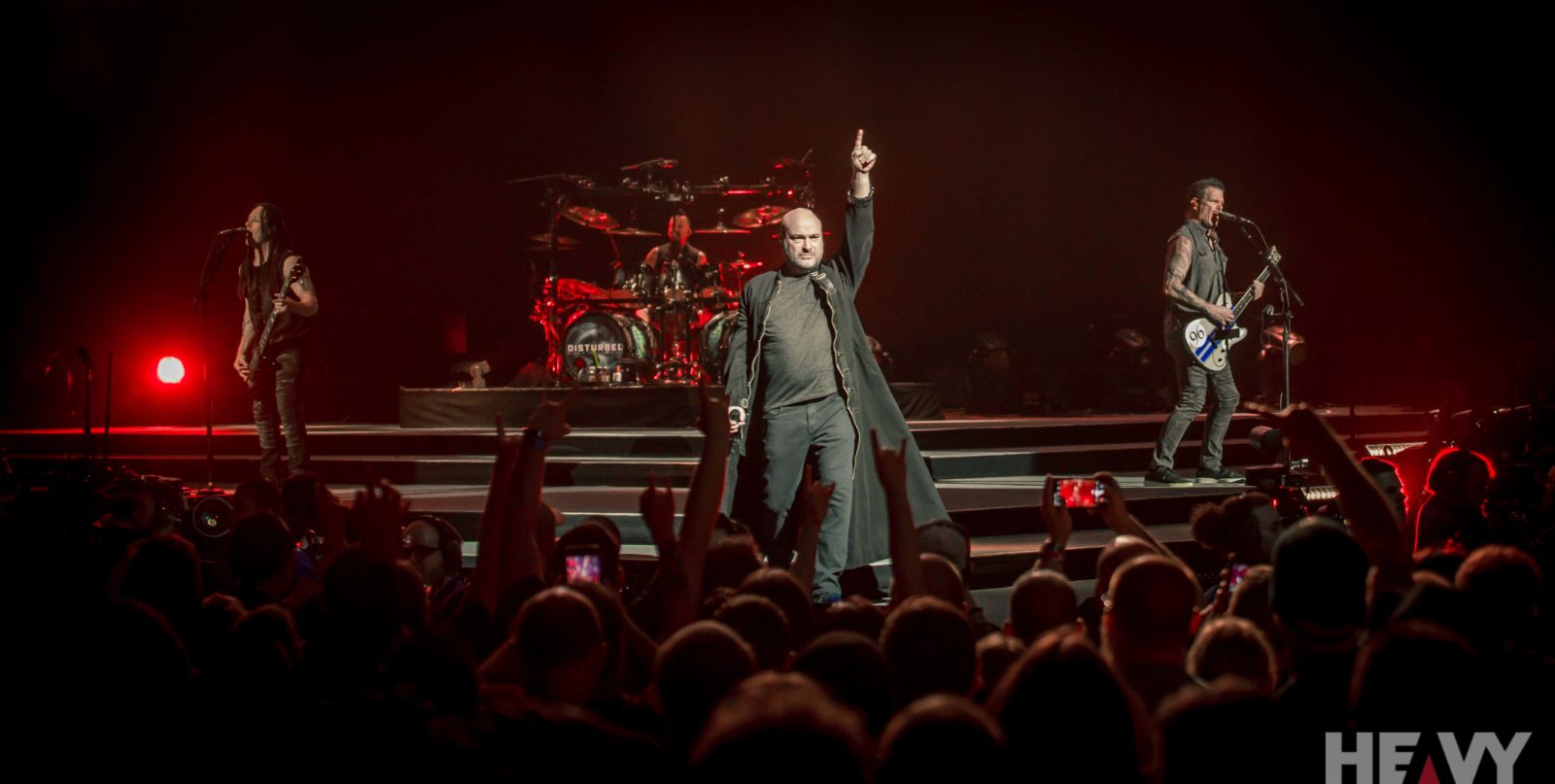 There are probably three arena-level rock bands in the U.S. today that seem to inspire as much loyalty from their fervid fan bases as they do vitriol from their legion of haters.

These are the butt of everyone’s rock jokes for decades now, Canadian import Nickelback, the band that never shies away from off the stage drama, Five Finger Death Punch and Chicago’s very own, Disturbed.

Whether you’re a fan or not of these acts there’s little disputing that all three continue to do something that fewer and fewer rock bands these days are even remotely capable of accomplishing, selling out 10,000 to 20,000 seat venues wherever and whenever they play.

Music is about the entertainment factor as much as it is, well the actual music for many fans.  Recognizing this, and more importantly, playing into it, is a must in today’s music world where bands can only monetize their trade by touring, versus the old paradigm of leaning on record sales to make a living.

Disturbed excels like few other rock acts today because not only have they accepted the aforementioned criterion they smartly play into it by creating a live experience that’s as epic in scale and bombast as it is deep in personal connections. 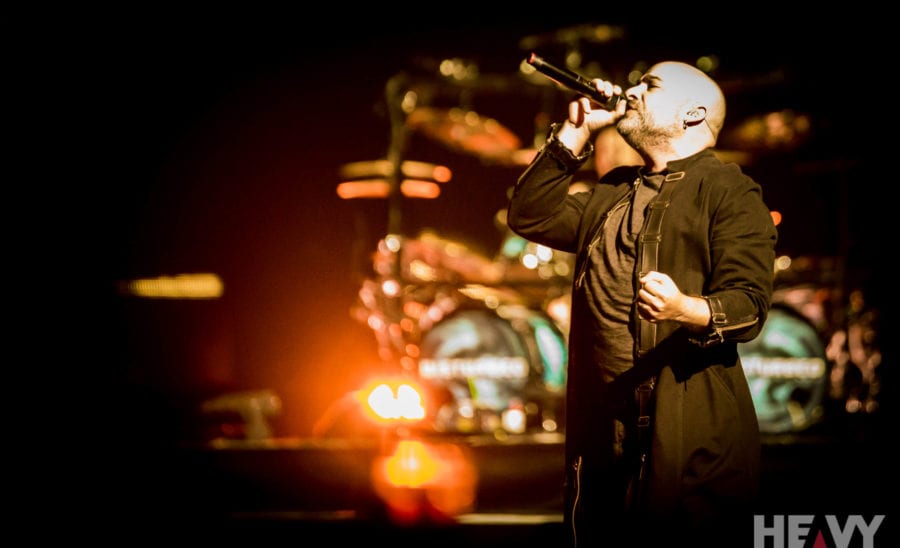 Whether it’s masterfully leveraging the power of venue-wide sing-a-longs to make the songs on their records come to life or employing pyrotechnics so immense that audience members furthest from the stage feel the heat, Disturbed always manage to deliver a live performance that leaves a lasting impression.

Still touring on 2018’s Evolution, Disturbed brought all their stage bells and whistles, in addition to 10,000 of their die-hard fans, to the sold-out Mohegan Sun Arena in Uncasville, CT this past Saturday.

Flames rising hundreds of feet to the ceiling, check.  A gargantuan video screen that almost spanned the entire width of the venue’s floor, check.  A full string section to accompany them on their cover of Simon & Garfunkel’s “Sounds of Silence”, an eighteen-year-old fan singing a cover of Rush’s “Working Man” and a flaming baby grand piano, check?

In other words, Disturbed basically threw just about everything they could at their fans in Connecticut except perhaps the proverbial kitchen sink.  And who knows?  Maybe some of the lucky Disturbed die-hards got a few of those at the band’s meet and greet held a few hours prior to the show. 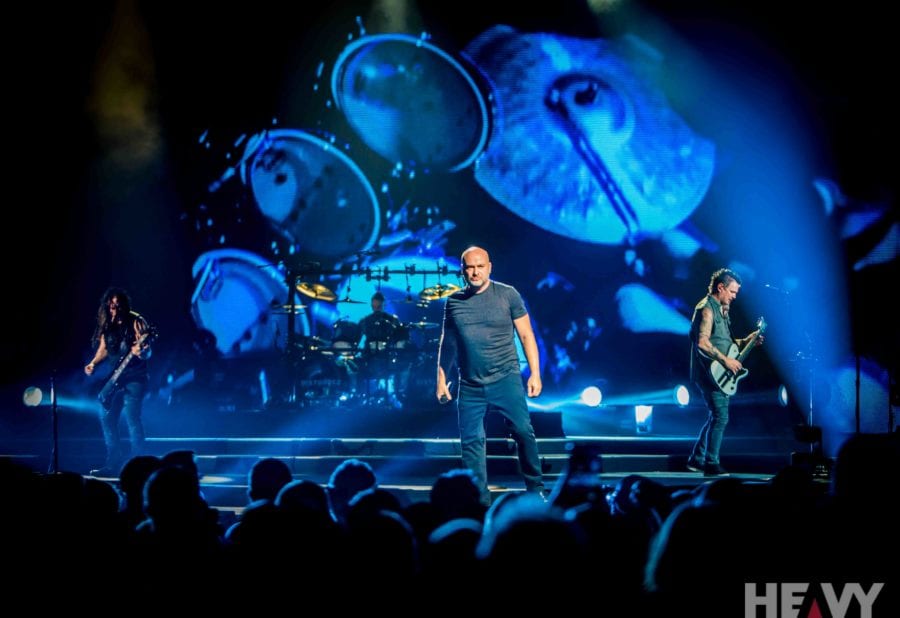 Disturbed initially made a name for themselves with their own unique blend of heavy riffs and hard rock pugnacity. However, they’ve also for lack of a better termed, evolved, into a band that has developed a social and political consciousness they use to effectively to not just inform but to empower their fans.

Whether it was frontman, David Draiman, pontificating on the perils of being an absentee bystander while a loved one is suffering from addiction or depression ahead of their playing “A Reason to Fight” or when the band paid homage to their undying fan base as well as to some of the rock icons we’ve lost in recent years before they played “Hold on to the Memories,” Disturbed did the one thing you can’t simply manufacture with any stage production elements, they connected on a deeply visceral level with just about every member of the audience.

Of course Disturbed also played many of the heart racing, fist-pumping hits their fans go crazy for, however, this space is going to abstain from giving the traditional and quite frankly, boring, setlist run down that makes up the vast majority of concert reviews being published today. 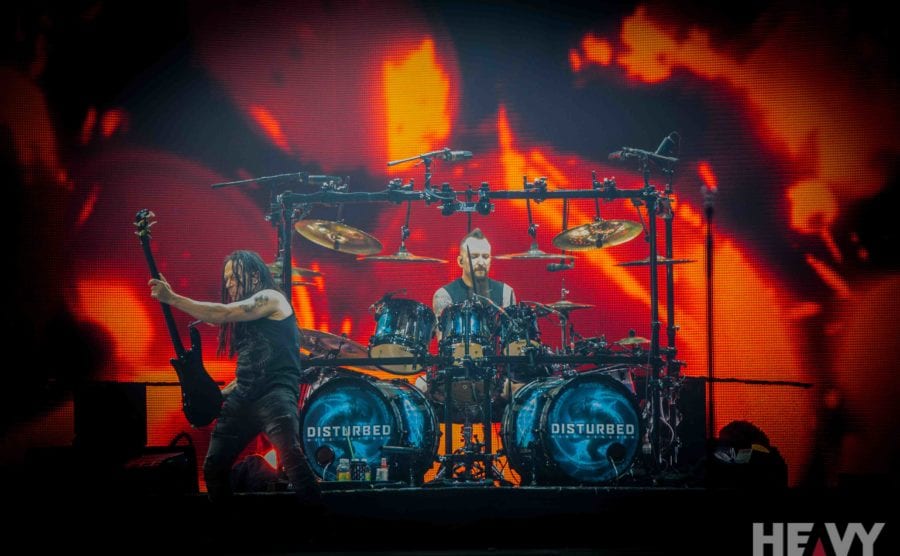 It’s not what a band plays live that should serve as the precipice for deciding on whether one should attend any concert? Instead, the criteria for such a decision should be rooted more in the entertainment factor as well as how well any band does at making their fans feel as though they are part of something bigger.

At the conclusion of Disturbed’s performance at the Mohegan Sun Arena in Connecticut this past Saturday had Draiman asked the audience, “Are you not entertained” a la Russell Crowe in the movie Gladiator, the roar the crowd would have let out would have likely blown all the chips from the hundreds of gaming tables in the adjacent casino right off their felts.

Perhaps, or of equal or even more important, many if not all of the fans exiting the arena following Disturbed’s performance likely felt more connected to the band and their fellow fans more so than they ever have previously.

If that’s not reason enough to give up a few of your hard-earned dollars up to see Disturbed on their current Evolution tour, what on Earth would be? 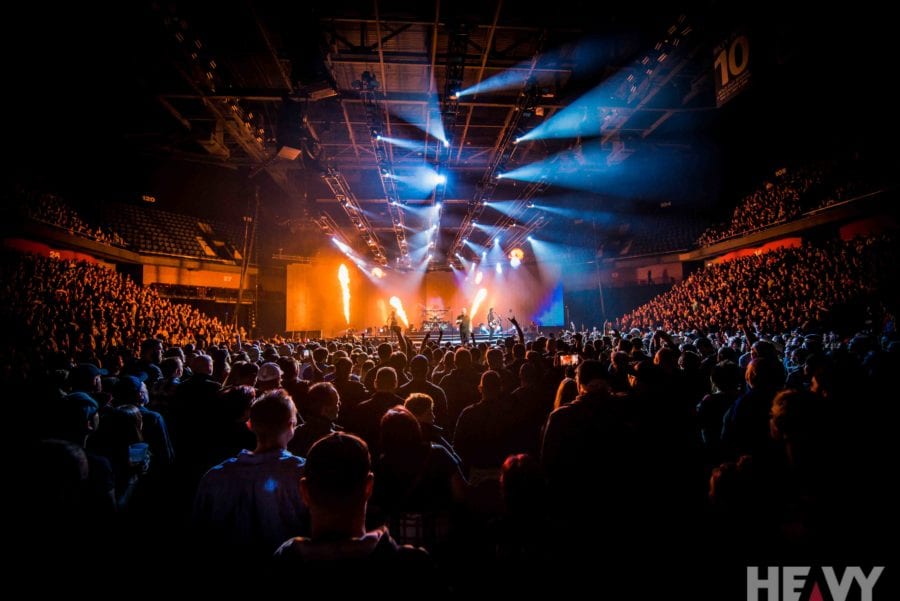