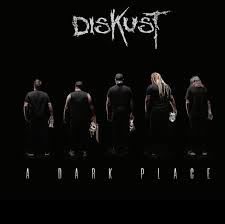 DisKust, a name you would have heard over the last few years in the Australian heavy music scene.

A name that’s had a fair share of haters due to social media comparisons to Slipknot, which were equally defended by their dedicated fanbase of Maniacs as they call them. Let’s be honest, though, is being compared to one of the world’s biggest and most successful metal bands really a bad thing? I think not, especially when it’s simplified down to the fact
that these guys wear masks. Let’s not get started on the whole Mushroomhead discussion, shall we …

Anyway, after a long wait and following some line-up changes, personal challenges, and a brain tumour, DisKust are due to finally release The Dark Place EP … today!!! The EP is an eight-track adventure, featuring some previously released material and the odd song you may have heard before at a live show. That’s if you’ve managed to get off your ass through the filthy Rona like these guys have, unlike many others.

So, let’s get into it, then. The opening and title track A Dark Place is a simplistic intro which builds a dark and haunting atmosphere thickened with pounding drums, solid chugs and the odd harmonic squeal. It certainly sets a very dark tone.

Splinter opens with some slowly picks chords and spoken word vocals, while the rest of the band slowly joins in to build up for an aggressive chorus. You can hear the honest distress and angst in the vocals, and the heaviness of the band carry through with intense power.

This is not a fast song, but it’s dark and heavy. It does soften momentarily in the latter half, but only long enough to introduce a pounding breakdown before seeing the song through to its conclusion.

The following track Cut-Throat is one the band has previously released a video for and may in fact be the song which brought on the comparisons to Slipknot. Well, yeah. It’s heavy, it’s groovy and there are some rap style vocal sections which could draw comparisons. Only five guys in this band though, and it’s just as goddam heavy, if not heavier in parts. You be the judge.

Resurfaced gets its early djent on with solid chugs, broken grooves and a full-blown vocal assault. It does throw in a left jab out of nowhere though as the choruses take off with melodic guitar parts and matching vocals which soar over the track. This is a tune to head bang, scream and sing along to. Just pick your spot and make sure you’re ready for that heavy ass breakdown that ends the track.

An epic synth intro pulls us into Khronic. This is another track and video the band has previously released which includes some fire and burning instruments. It’s heavy and in your face, but it does pull back and pulls you into another massive melodic chorus, and of course another solid breakdown. It’s a good formula, and although some may see it as generic, it offers enough variation and complexity to stand on its own, as its own!

Another short synth intro warms us up for Broken, which starts with a few simple distorted guitar notes, a few heavy chugs and some spoken word lyrics followed by a heavy ass grooving riff. This track just builds on itself, with heavy riff after heavy riff and crushing vocal after crushing vocal. Following a quick guitar interlude, the song takes on some legs and lifts pace momentarily before bringing us back to the chorus and crushing us with some toms, bass and the lowest of low growls.

Dead World initially plays out quite similar to the previous track but once underway takes on its own groove. By now, you should be getting how this band sounds. It’s heavy, it’s groovy, and it carries a certain amount of despair and angst that we all too often find in our dark place. An almost classical sounding interlude towards the end of the track brings forth another melodic vocal passage which acts as an effective closure to the track.

The final track on the album is the most recent one Diskust have released.

Burning Alive showcases the more melodic side of the band. A sound that fans would be familiar with from their previously released and fan favourite track, Honestly. Like Honestly, you can hear the sincerity clearly in this track. It’s a slow burner, but when it hits the heavy, it hits the fucking heavy. That chorus, in my opinion, is melodic heavy at it’s best. And if you don’t like melody in your heavy, the breakdown should at least tickle your fancy.

I could list a heap of bands that these guys sound like, most of which are some of my favourite bands, but I won’t. Instead, I’ll ask you just to listen. I know right now it’s not going to be every one’s cup of tea, because it does tickle the edges of Nu-Metal, although heavier, and more modern. Haters gonna hate though, right, and elitists are just gonna sit back and stroke their own ego’s while shouting “Fucking Slayer” or ripping bong hits before taking an afternoon nanna nap to some Tool.

Anyway, I hope you enjoy it, and if not, who gives a fuck? I don’t, because I did.