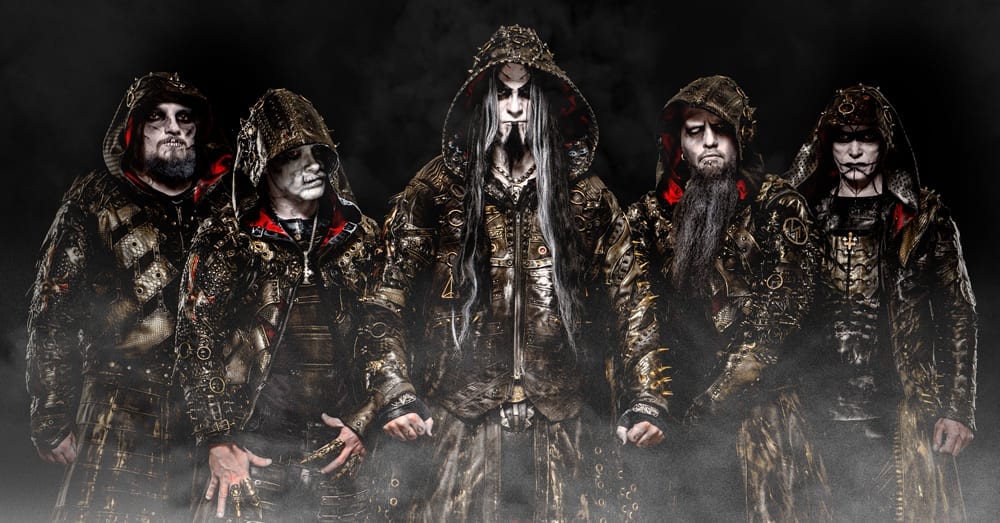 Two incredible decades and more of creating not just music but an art form in itself, Dimmu Borgir have undeniably earned their position and reputation as one of the greatest Norwegian Black Metal bands that ever existed. There is no doubt that the band stands apart in more ways than one, primarily with their majestic demeanour and magnificent sound and style. If Norwegian black metal were a subject of study, Dimmu Borgir would certainly occupy a few chapters with the massive legacy they’ve created with their music.  And there’s no stopping them. Their latest offering to the world comes after 8 years and is an absolute masterpiece!

HEAVY had the honour of catching up with one of the founding members and guitarist Silenoz who expressed how grateful and keen the band are to be able to finally come down for a full tour. “We’re very excited about playing in Australia; it has been quite a long time since we came here for the Soundwave Festival so there is a lot of time to make up for. So we’re really glad that we have the opportunity to do some headline shows for our fans there. We’re going to do our part in making it one of our strongest performances; I feel that this is the best live set up of the band so far. ” So what can fans expect? “Yeah the thing with us and many other bands that have released so many albums,  we have a so-called luxury problem to try and put the setlist together.  There’s just so much to choose from and sometimes it can be difficult! So obviously with the new album in the bag, we’ll be playing a few songs off that but also, we are going to try and cover important parts of our career.  We’re not a typical band that plays three hours per show but that’s another reason to come back too!”

It has been 8 years since the release of their monumental ‘Abrahadabra’, and the wait for new music albeit long was certainly worth it. On asking whether this long time gap between releases was intentional or not, Silenoz replies,
“Actually its a yes and no answer. We usually take a break after each touring cycle and this time around the break got a little bit longer but at the same time, we did kind of do it on purpose. We wanted to keep a low profile from the public eye to just do things in our time and in our temple with the new album. From the outside, it looks more dramatic than it was for us because we were just trying to shut the world out and concentrate on what we do. That was very important for us – to focus on our art and not get distracted by anything or any opinions. Things did get slightly delayed especially since we also had the orchestra DVD release which was a little late but everything worked out very well. Time flies by!”

Musically, this album was very spiritual in a way to me – the whole atmosphere and soundscape gave me a very oddly calming feeling and the idea that in some way,  the making of this album was some sort of a ritual for the band and that their music had a very for lack of a better word, enlightened vibe to it. “I totally agree with that – in fact, I think it’s a good general description of how the album sounds as well as actually, how the band has been functioning especially in the later years. A lot of things have changed of course over time but we wouldn’t be where we are today for a lot of sacrifice and effort. That’s how it’s supposed to be done – art shouldn’t come easy. You should put everything you have into it physically, mentally, and spiritually. It is a long journey and once you step onto that roller coaster you’re in for the long haul.  I guess what I’m trying to say is that’s what I hope comes forth through this album.”

Much like with any new release by a band, it is always met with mixed responses and while ‘Eonian’ does see Dimmu in a new light in a few ways, it is still very much Dimmu Borgir. Silenoz shared his thoughts on responses like this. ” It happens like it’s always the case, the ones who scream the loudest are the ones that go away the quickest. That’s fine I think because polarised opinions are good. If people were more indifferent I would be worried. I’m a fan of music and so many bands myself so when I get to know new albums from my favourite bands, I need more time to get into it and process it. But at the same time I will also say that if we made a copy of an older album, that just wouldn’t make sense to us. We like to keep things fresh and new as far as possible.”

When talking about the journey towards the writing of ‘Eonian’, he said, ” We’ve had demos for the album since 2012 –  skeletons from 7 years ago that we used for this album. Also, I don’t think we did anything differently in that sense because we don’t have a set formula, we just meet when we have the inspiration going then we bring our own stuff to the pot and stir it so to speak. Whatever comes out is what we keep. We also had for this writing session tons of leftover material; we could’ve done a double album. it’s just that you know, we never throw away ideas, at some point some of the ideas weren’t the right time with this album but maybe for the next one we always have material and we always work on new stuff and that’ something we keep doing. The actual recording process was pretty straightforward as we recorded demos in our own studio and then we pretty much started from scratch again with Jens Bogren.  We have gotten a lot better at planning ahead and doing this album in our time definitely shows that.”

25 years and counting –  that’s a bloody milestone if you ask me! ” It doesn’t feel like 25 years, how can you compare 25 years of this to 25 years of doing something else – its hard – we are fortunate to be able to continue to create our art the way we do everthing on our own terms, that’s why were still here – we always do things on our own terms.” Loving this response, I prodded even further by asking with he thinks was the band’s philosophy in general and what they aim to convey with their music to which he responded, ” From my point of view – asking questions about the bigger things in life is one of the most important aspects not only for me as an artist but in my private life as well. i think the music we make we dont really think in terms of it has to sound like this or like that but for us – if I had to sum it up the atmosphere is the right description for the musical part and if people want to link us to the term symphonic black metal im totally fine but the older I get the less important labels are for me. I guess its about not concluding with anything.”

It was so amazing to me that he said that considering my next question which is a standard one I usually ask bands about what they think of labels and whether spend too much time focusing on them and not the actual music. “I definitely think so but I think that goes with everything else, people are too hung up with labelling stuff and if it doesn’t fit under their umbrella then it is automatically incorrect. To limit yourself in a way like that is something I don’t feel close to at all. It’s about breaking limits and moving on and up in the world.”

The final message? “We are thrilled and very lucky to have so many patient, loyal fans especially after waiting for us for so many years to release no music. I would totally understand if they said fuck this, we’re not waiting for them anymore but I hope that if they have an inch of patience left to check out the new album and let it get under their sin and listen to it with an open mind it’s going to change a few opinions. Thanks to everyone for the support!”