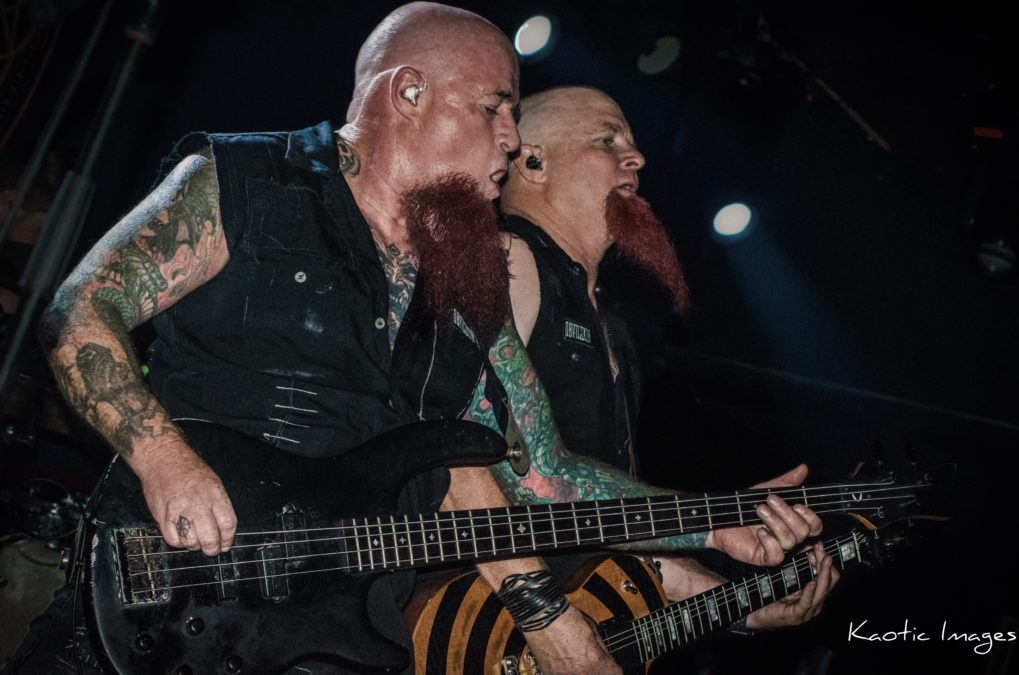 *cover photo is from file footage, not this performance*

After being briefly married to a Kiwi possibly my last idea of a great night out is going to see two bands from that geographical region.

But that’s a story for another day…

Today we shall talk about the early shots fired by those two bands, that, if the metal Gods have even a hint of decency about them, will be remembered as the opening salvos of a global assault.

With apologies to These Four Walls I only caught the final two songs of their set, but those two songs were enough to make sure I start getting ready a bit earlier next time I see their name on the bill.

Shepherd’s Reign are a band guaranteed an audience due to their heritage alone, with the Polynesian bloodlines flowing through the five members a uniting musical factor that only scratches the surface of the potential this band has.

Theirs is a band name I have heard plenty about, and, if I am being honest here, one I have slightly avoided purely due to the fact that most bands seldom attain the level of precision they are built up to having once the proverbial bandwagon is jumped on.

These guys smash that notion and then some.

Walking onto the stage with a look that would make the great hair stylist Stefan Ackerie blush, Shepherd’s Reign set about carving their own version of the truth with a set that belied their supporting status on the night.

There was no getting to know each other or respectful foreplay. Instead, the band strode straight to third bass and let their music do the talking.

I didn’t understand one word that came out of their mouths for the whole set – although I think they may have said “hello Brisbane” at one stage – but tonight was validation of the belief that music transcends all barriers.

With a sound that incorporates elements of pretty much every metal band worth their weight in horns but sprinkled with enough of their own DNA to create an entirely new sub-species of music, Shepherd’s Reign are a pulsating indictment of music meets culture that are impossible to resist.

Which is lucky for them because the partner of my nephew is of Polynesian descent herself and sent him along with me to assess the credentials of a band who dare to mix heavy metal with the region’s proud heritage.

When he face-timed the boss for her approval, the response went pretty much along the lines of “fuck me, they are GOOD”, which was all the confirmation I needed.

Believe the hype for once. Shepherd’s Reign are a band whose name you will be hearing a lot of in the not too distant future.

And if you don’t agree go and say it to one of them in person.

So if that was the entree the main course would want to be 5 star to avoid a potential riot, which was never in doubt from the moment the first notes of Elvis filled the room and Devilskin exploded on stage with enough energy to power a small country for a month.

While Devilskin have been to Australia on more than one occasion previously, this current tour to promote last year’s Red album marks their first visit as a headlining act.

The biggest question surrounding the run of shows was whether the band was ready to carry a whole tour of their own validation and the answer is a resounding yes.

Devilskin barely paused long enough for vocalist Jennie Skulander to catch her breath before powering through All Fall Down, Pray and Do You See Birds, each song accentuating different sides of the respective member’s musical personalities.

Menacing each side of the stage and looking resplendent with matching dyed red goaties, guitarist Tony Vincent and bass player Paul Martin stamped their authority from the outset, pacing the breadth and width of the stage while keeping direct eye contact with any member of the crowd who dared look in their direction, setting the tone for what was essentially more of a stage show than just a live performance.

Devilskin don’t want to just play FOR you. They want you to be a part of their universe with an immersive amalgamation of talent, intent, and passion that packs more punch than Mike Tyson on a domestic airline.

They were as tight as they were entertaining, with drummer Nic Martin playing with the precision of a military airstrike, laying the platform for wave after wave of sonic assault that lulled you into submission before mercilessly stomping on your throat.

That is largely due to the flawless vocals laid down by Skulander who transforms from innocent prom queen to menacing demon with an ease that would be scary if it wasn’t so beautiful.

To say the girl can sing is an understatement.

Her vocals are essentially another instrument as well a weapon that remains constantly locked and loaded but only fires when necessary.

While there are many other vocalists out there that may match her for ability, few are able to find the balance between enough and too much when it comes to highlighting their musical strengths.

They either find that note that always delivers the WOW factor then overdo it, or they fall short in attempting the unexpected, but not Skulander.

Where others find their strong point and wear it as a badge of honour, Skulander keeps it more as a back up and unleashes it when the song requires before shelving it again until the time is right.

I thankfully avoided potential death when at one stage Paul rhetorically asked over the microphone “how many Kiwis are here tonight?”

Without thinking I replied “too many” but thankfully the sound of what seemed like 1000 kiwi accents screaming in appreciation covered my response so I somehow lived to see out the set.

One of the highlights of the night was Never See The Light, a song written for one of Devilskin’s close friends who took his own life.

It was as emotionally powerful as it was engaging, starting with haunting slide guitar before delivering its message that life is precious amid a wall of guitar and drums that hung thick in the air long after the song finished.

Not long after Skulander invited the crowd to play a game of high note singalong, whereby she would sing a note before handing vocal duties over to whatever section of the audience that could match.

As she progressively got higher, the audible response from the front of stage got lesser, before she delivered the knockout blow that could have lifted the roof off the Mansfield if it wasn’t securely fixed down.

It was a moment of connection between band and crowd that carried through Some Life, Voices and Start A Revolution, each song threatening to do just that as the set drew to an inevitable end.

After saying their thanks and exiting the stage after Covet, Skulander cheekily declared “I forgot there was one song we didn’t play” before the band returned and smashed through Little Pills then left, lingering long enough for each band member to show their gratitude.

It was a performance that affirmed what until tonight was only a thought.

Devilskin have served their apprenticeship supporting other bands and are now a world class headliner in their own right.

And the scary thing is, you just know they can get even better…

And in good news for fans Devilskin are only two shows into the tour, so you can still catch them on the Gold Coast, Adelaide, Perth or Melbourne. Details and ticket link below.