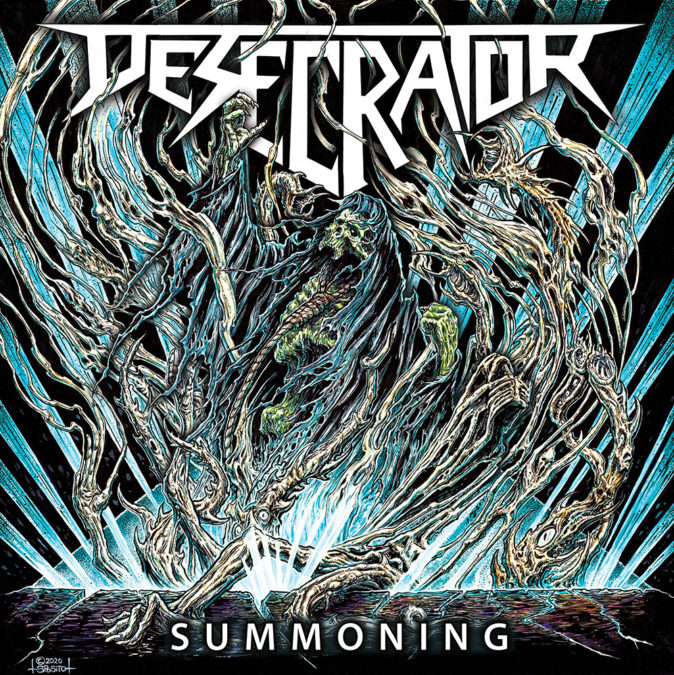 There is nothing quite like being summoned late on a Saturday night to review an Australian thrash metal band. That is of course except for being at a metal show which is fucking near impossible with the filthy Rona still lurking about. But here we are, and here we have the latest release by Desecrator who can hopefully follow through with their tour plans by somehow bypassing the filthy state of roaches after a snap state lock down was enforced earlier today.

Anyway, FCK CRNA, lets talk about Summoning in all its thrash metal glory!

A quick intro Raise The Dead throws us head first into the title track Summoning which opens with some classic thrash metal riffing which sounds like it’s straight out of the Bay Area Thrash scene post New Wave of British Heavy Metal.

Traditional style semi-clean vocals enter over the solid riffs, and when the song hits its choruses the band settles into a
slower but very solid groove. Thrash riff after thrash riff tie into each other perfectly before opening-up to let the guitars solo and then lead us into a thumping anthemic outro chant.

Hate at First Sight keeps up the pace and the band show us just how fast they can play. The versus take off with a heavy punk feel and we start to hear the gravel in the vocalist’s voice. A heavy distorted bass groove takes us into the bridge, and we again hear the guitars take over and solo just as you would expect in a good thrash song. More solo, more thrash, and that’s that!

Now we enter the Belly Of The Beast where we are welcomed by some clean but crispy guitars which set us up for a slower, yet somehow heavier thrash groove. It’s not long though before the band hits 200+ bpm again and the song launches on its way. It interweaves between fast thrash and heavy groove sections until we start to hear some
duelling guitar melodies throughout the bridge and then a thrashed out groove driven outro.

Beg, Steal or Borrow blesses us with dirty running bass intro while the guitars jump in for a bit of a twiddle. And nothing pleases me more than to hear a classic thrash gallop throw us into a track, and that’s exactly what happens.

Drums thump, and guitars ring out in the intro to Wipe The Slate. This builds and builds for a short time while dual guitars start to enter. Then boom, get some fucking thrash metal into ya! Full pace double kick holds the track together, and even when it loosens up a little, the off-beat galloped triplets add an interesting groove to the choruses.

At this point, I reckon this album has pretty much spelt itself out to me, and I’m not expecting any more than a few more classic thrash songs. Let’s see what these last few tracks have in store for us, though.

Manic sounds just like it’s title, it’s relentless and manic in its delivery. The bridge in this song is killer, and the guitar solo shredded my head off. Fucking absolute banger of a thrash tune.

Are we about to hear a classic thrash ballad, is that even a thing? The intro to A Light In The Dark would have us believe so. The song does heavy up a little but barely picks up pace, so I’m going to rest on it being a trash metal ballad. It’s good to hear the band pull back for a while and give the album a little bit of air.

Smoke ‘Em If Ya Got ‘Em, I just may have done that earlier today, so please excuse me if I’m a little slow on following this full paced Thrash Metal that the band continues to deliver. I swear I didn’t inhale though, and I’m not sure the band remembered to while delivering this belter of a track either.

If you’re a fan of thrash metal, then this album is The Devil You Know and the closing track titled just that tells us it’s better the devil you know. Thrash is the devil you know, and thrash is what Desecrator knows and does so well.

Relentless, bludgeoning, neck wrecking thrash metal. Get it up ya, get it in ya and get It all around ya listening holes!

Summoning is out August 27 and can be pre-ordered here: https://ffm.to/summoning-album