DESCENT INTO THE MAELSTROM: RADIO BIRDMAN 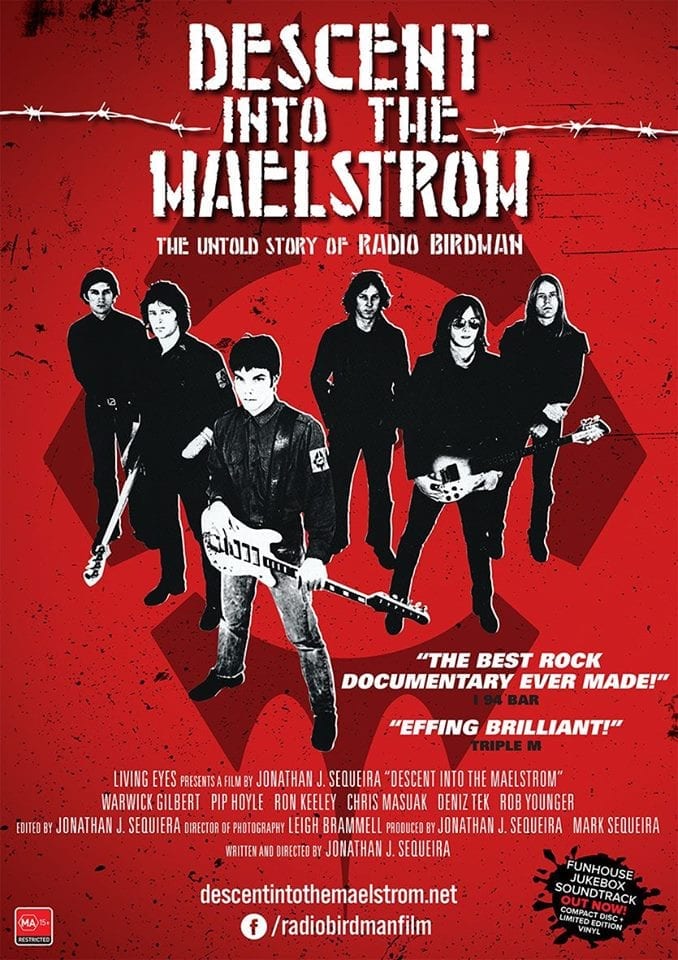 Australia. The music scene is changing and along with the change comes a band called Radio Birdman. Back then, the band struggled to get gigs because their sound wasn’t like anything else around at the time. At the time, they only lasted for four years, but it doing so, set a new path for bands that were a little bit heavy or a little bit different in the future.

Flash forward to 2017. The band has now been reformed for a number of years – during which time they have recorded new material, have had tours of Australia, the United States and Europe, and have also been inducted into the ARIA Hall Of Fame. Now the story of Radio Birdman is coming to a cinema near you in the form of a new documentary titled: Descent Into The Maelstrom. Heavy Mag caught up with Radio Birdman keyboard player, Philip ‘Pip’ Hoyle to have a chat about the doco.

Pip is quick to highlight the fact that the interview is ‘around’ Radio Birdman rather than ‘about’, and he says the band were actually pleasantly surprised when they got to watch it back for the first time. “We were pleasantly surprised,” he says. “It’s a fun documentary, not that I know much about movies, but it deals with the truth, and it deals with a whole range of human emotions ranging from the death of Carl [Rorke] – our first bass player – through to various little differences of opinion that we have had over the years. It also deals with the positive side – the achievements, the good times that we had together and the audience. Somehow it manages to keep a positive centre to it all which is partly the music, but also a lot more than just the music… so yeah it just feels right. It captures why and not just what!”

He is also quick to admit that he was terrified when the phone call first came through about the fact that Radio Birdman was about to be the subject of a documentary. “It was absolute terror,” he says without even taking the time to think. ‘First, at a silly level, I hate even seeing photos, let alone movies of myself ever…. because it is even worse than a mirror, isn’t it? Apart from that, I was also worried that I might have to face a whole lot of things that I’d rather not even think about, but in the end, it turned out good. Not because we dodged anything or anything like that because Johnathan [Sequeira – the director] is good at getting anything out of anybody and make them feel good about it. So it is was a very positive experience, but I was very anxious at the time. I wasn’t initially enthusiastic – everybody in their life has a few sleeping dogs that they would rather let lie – but I think the thing that I found was that all of us, present and the past, of the Radio Birdman family, just all pitched in and told it how it was but in a mutually respectful way which was good.”

As we explore the past of Radio Birdman, Pip admits that the label of ‘punk’ has never sat well with Radio Birdman. “Punk was a fashion label,” he explains. “We were what we were and people retro-fitted that term punk to us but we never set out to be fashionable or to play punk. To us, it was a retrospective label of convenience that means something to some people, and while we respect the punk musicians, we don’t see ourselves in that line. You could argue that the American Punk is closer than the British scene. But we probably brought the Australian music scene back to what it should have been – if you go back to The Easybeats and go back to Masters & Apprentices (especially Masters & Apprentices), there is that hard-edged, uncompromising, extremely well-played, probably better than us, style of music. Then what happened at some stage when music started to become more popular: it became more fashionable, and music that was challenging and that would make you think was not particularly welcome. I’m not going to name names and be disrespectful, but the Australian music scene at that time wanted tunes with boring harmonies and strange suits. It wasn’t what people needed that wanted to understand music, and for us, we just went back and rediscovered those routes, so even though we were new in some ways, we weren’t so much in others.”

When I mention to Pip that a lot of the heavier bands today still reference Radio Birdman as the band that opened doors for them in the Australian music scene, he admits that it is part of their legacy that he feels proud of. “I feel really happy when I hear that,” he says. “And I think one of the reasons why the movie made me happy is because, if you think of the strata or the sandstone of Australian culture, somewhere amongst all the strata is a couple of grains that are us. We are not just fashion; we are actually part of the culture. So, for me, I am grateful that people feel that way and if we did open the doors for a more diverse musically culture then we are really delighted, but for me, it is more of that cultural validation that makes me happy. And yes, I am a human being; so yes, I feel a bit proud about it. But above all, I am happy and thankful that people have taken the time and opportunity because they could have let it lapse.”

Descent Into The Maelstrom is currently showing in a limited number of Australian cinemas.