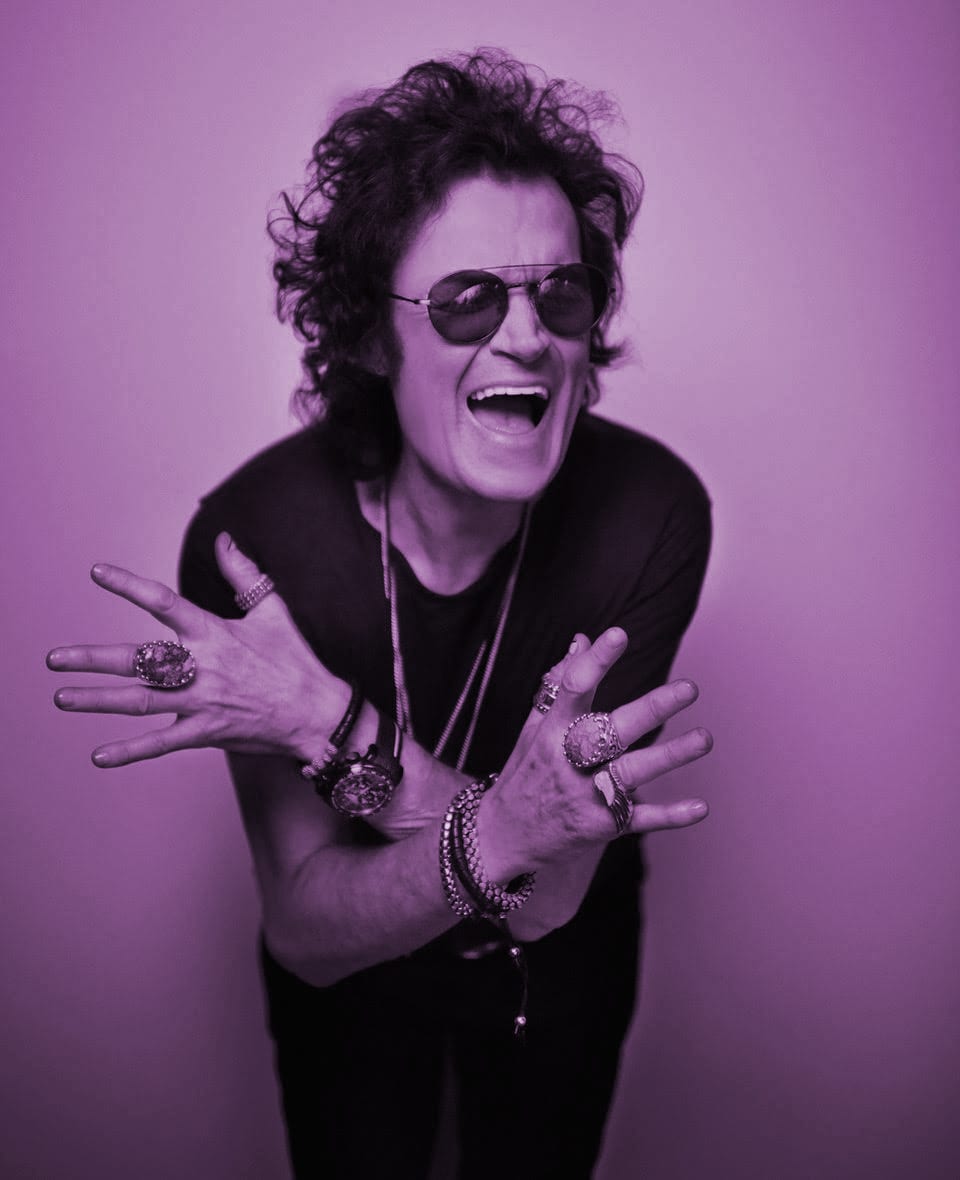 “It’s been forever since I’ve actually done a complete Deep Purple show alone or with the band, so I just figured it was time I did something and pay my respects to the music and fans that have been with me all along and given love to the heritage that is Deep Purple,” enthused former vocalist, Glenn Hughes about his September tour. “I’m really honoured to be able to do that.”

Alongside David Coverdale, Hughes fronted the legendary band from 1973 to 1976; in the process, fronting the band for three studio albums as well as live releases. Now, after 41 years, he has decided to pay homage to the legacy that is Deep Purple by performing a collection of the band’s songs live for the first time since he left.

“I just think it’s time to do things at this moment and to honour the things that I’ve done that people have been asking me to do for quite some time. It’s not like I’m trying to follow suit or follow a trend, it’s more that I have a calling in my head to do this, and the response has been amazing from everywhere. It looks like I’m gonna be taking this to more countries, so it is definitely the right time to be doing it.”

Despite singing on only the three albums, Hughes admits it would be highly remiss of him not to include a few of the time-honoured Deep Purple songs that were either side of his era.

“If anybody is familiar with my work, they know I did only the three albums: Burn, Stormbringer, and Come Taste the Band, plus Made in Europe. But David and I also sang ‘Smoke on the Water’ and ‘Highway Star’ some nights, so I probably will be doing that also, but I am primarily doing the songs that I brought into the band with Mark III and Mark IV.”

To help him in this herculean task, Hughes has handpicked a backing band that he thinks not only has the talent to play these classic tunes, but also the passion to play them in a manner befitting the original status.

“I wanted the guys that I thought would be appropriate for this kind of music and this kind of music is the music I made all of those years ago. But today, as you know, a lot of bands are trying to emulate and formulate the things we were doing in the early 1970’s. So I thought to be one of the originators of that music, it would be better to have people with me that understand that; although they are younger than me (laughs). One of them is Lachy Doley on keys, who is an Australian guy, and he the greatest living keyboard player in the world. I have Jeff Kollman on guitar out of Los Angeles, someone I have been working with on-and-off for the last fifteen years who I brought into this because he’s suitable and representable for this genre of music. Our drummer is Pontus Engborg who is a well-versed, hard rock drummer that understands the rudiments of Ian Paice, so it’s something that we’re all bringing to the table to make it a genuine Deep Purple experience.”

Hughes last performed with Deep Purple in 1976 at Liverpool’s Empire Theatre, and although it was more than forty years ago, he still has fond memories of that period of his life.

“It was a different period for me,” he recalled, “because back in those days, we were young guys doing what we were doing and making great music, and we were going down different roads personally, and things were going off the rails as they did in most bands of that generation. I made three studio albums and a few live albums, and it was a lot of work, a lot of touring nonstop for three or four years. I have great memories of it, and lost two of those guys – Tommy Bolin and Jon Lord – so on this tour, I’ll be honouring and respecting the memories of those two gentlemen, as well.”

When first approached about joining the already well-established Deep Purple, Hughes was playing with a little-known band called Trapeze, a band who although showing promise would never live up to the lofty standards set by Deep Purple.

He reflected, “I was playing in Trapeze, and we played at the Whisky a Go Go sometime early in 1972 in L.A., and I was told that in the audience was Ritchie Blackmore and I thought, ‘How great, Blackmore is here.’ He came to see me after the show, and he was really nice, and I was stoked thinking he really liked our band. About six months later, we were in London playing at the Marquee Club, and there in the audience was Jon Lord and Ian Paice, and I thought it was strange that Blackmore was in L.A. and then these two came to see us in London. I thought it was really great that they loved our band (laughs). Anyway, cut to the chase, three or four months later, we played the Whisky again, and that time Blackmore, Paice, and Lord were all there, and I had no idea they were checking me out and listening to my music, or even thinking about me! I was so young and naive; I had no idea they were actually checking me out to join the band. It was very, very bizarre.”

Back then, Deep Purple was revolutionising music with their heaviness and willingness to experiment, but the loss of two of their more popular members in Ian Gillan and Roger Glover was a potential turning point and defining moment of their career to date.

“They had two guys in Ian and Roger leave the band, and here came David Coverdale and I, and it was a big moment for Deep Purple,” agreed Hughes. “They had just come off the back of Made in Japan and had two of the biggest rock albums of the 1970’s and how could you replace those two guys? It was definitely such a big moment, and it could have been a disaster if it wasn’t done correctly. I’ve always believed in the karmic aspect of things that things are supposed to happen or not supposed to or whatever in the karmic value. We put our heads down and went to Clearwell Castle in Gloucestershire, and we wrote the album called Burn. Of course, that album was a huge success all over the world which gave Deep Purple a new set of wheels and a new life, and there was a lot of camaraderies back in the day. The band was brought together again, and I’m really glad that David and I were invited to join.”

While the idea of dual vocalists is nothing new in the modern age, back then it was almost unheard of and rarely done successfully, so it was a surprise when Deep Purple announced both Hughes and Coverdale in the role.

“When they asked me to join permanently, I was actually with them in New York when they played Madison Square Gardens,” Hughes remembered. “This would have been some time in April 1973, and I was there and still had no idea that the next day in the boardroom of the Mariott Hotel in Central New York that they were gonna ask me to join. I was extremely naive. They said, ‘We want you to join’. I remember thinking, ‘What do they want me to do?’ (laughs) They said, ‘We want you to play bass and sing,’ and I said, ‘I’m just a singer,’ and they said they were also going to ask Paul Rogers to join as the singer, and I thought great. I like Paul Rogers, he’s a fantastic friend of mine so I thought it would be great but Paul was forming a band called Bad Company, so I joined the band, and then we set about finding a new singer. It took about six weeks, and then we found this young man from the North East of England named David Coverdale – a complete unknown. It was a really big gamble for a band that had had so much success to ask a fellow that had never really recorded anything, but it was wonderful, and that’s how we started the dual-lead vocals of David and myself. Of course, they wanted me to play bass, but they also wanted me to sing with David to have this two lead singer approach which I thought nobody else was doing at the time, and I think that ticked the box with a lot of fans.”

Deep Purple means many different things to people from all walks of life, but to Hughes, it reflects a special time of his evolution. A time where he grew from a boy into a man and gained invaluable insight into the industry that was to sustain him for the rest of his career.

“It meant the growth of me as a child,” he confessed. “I was just 21 and back in those times… I mean, we had Black Sabbath, Led Zeppelin, The Who, Pink Floyd. All of the very top bands, if I may be respectful, were British. They were all coming from the U.K., and it was a huge moment for David and I to step into this huge band, and we were treated really well. But we had a lot of work to do, and it was great to be in the band at that time.”

Last year, Deep Purple was inducted into the Rock and Roll Hall of Fame, with many fans believing it was as inevitable as the sun rising each morning, if not overdue.

“It was great,” Hughes gushed of the experience. “To be inducted with the other fellows was… David and I came in together and are great friends, but, of course, we don’t see the other fellows because they live in another continent. David and I live on the West Coast of the US of A, so we are really close, but we don’t really see the other guys in Deep Purple. So it was a really nice moment for us all to stand on the same stage together and honour each other, actually. It was a really good moment for a chance to recap on some good energy and reflect.”