Dealing With The Ghosts Of MY DYING BRIDE It’s so creative and wonderful to look at and half the time when I see their [the fans] ideas are better than mine, I use their ideas instead!

For thirty years My Dying Bride have been the Godfathers of depressive-death-doom music; they have never strayed from their melancholic-pain-soundtrack which is inherently felt by the world at large, at least at some point in one’s life.

Guitarist Andrew Craighan’s songwriting ability captures and articulates pain and suffering and is second to none. Craighan’s art has been for three decades poetically encapsulated by My Dying Bride’s vocalist Aaron Stainthorp who embraces the true nature and inner core of all that is beautifully brutal. Stainthorp’s mere presence sends shivers down the spine of listeners as he steps toward a microphone. Whilst many over the years have tried to emulate Aaron, truly there is no other metal vocalist that can hold a candle to his lyrical and vocal talent.

Listen to the interview:

The press release that accompanied the latest MDB album, The Ghost Of Orion, reads like a fictional tragedy screenplay that could not have been for any other band except for My Dying Bride and its five members, but the irony is that it was a true story. A few years earlier Aaron’s daughter became ill with cancer and just as she was given the all-clear of the affliction, the original guitarist (Calvin) quit the band without explanation and their drummer left the band moments before they were due to enter the studio.

This could have been the nail in the coffin for a band that has thrived on writing the soundtrack to life’s tragedies, but thankfully it was not. Both Andrew and Aaron regrouped and meticulously penned the 2020 return of My Dying Bride with The Ghost Of Orion.

Stainthorp gave HEAVY Magazine some insight into how collectively the band managed to keep things together, not to mention the obligatory chat about isolating and life during the current pandemic that is COVID-19.

Metal V asks Stainthorp if he is dutifully self-isolating to which he starkly replies, “We don’t have a choice, to be honest. My daughter lost her spleen to cancer so she is quite vulnerable so we are going nowhere! We have friends and family dropping things off for us because we can’t go out and pick medical supplies up.” 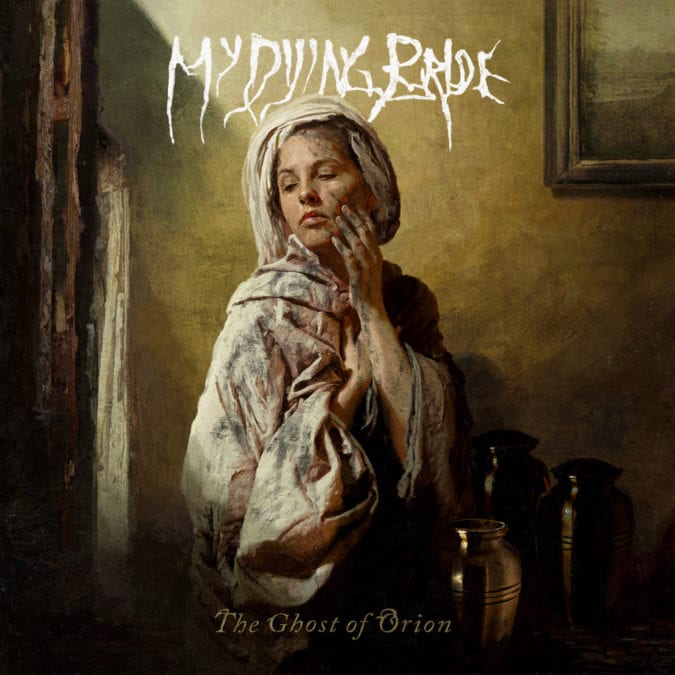 Continuing Neil brings up the obvious point that in the environment the world is in right now that it would be the perfect writing environment for Aaron and MDB to which he answers, “Well it would except that because the schools are closed I’m home teaching my daughter which I did not realise how hard that was but now my respect for teachers has really soared…Most of the day is filled trying to teach English and Maths, then I cook tea, stick her in the bath then have stories and I’m as tired as she is at 7 o’clock, so it’s early to bed for me at the moment so there isn’t a lot of writing being done.”

On the new album and its title, Aaron elaborates, “I was writing a story however you will be disappointed to know that I’m not be revealing the story to anybody yet! Imagine if you made a movie. You won’t give away the ending in order of promotion. In perhaps a years time I’ll let people know what I meant by The Ghost Of Orion but in the interim, our wonderful fans will come up with their own ideas on the title, what it means, where it’s going and what it’s hiding.”

Continuing Aaron says, “I love to read all these comments! On just about every album fans are all over it analysing every word and trying to find if there’s a second meaning going on.” It’s on this point, Aaron gleefully states, “It’s so creative and wonderful to look at and half the time when I see their [the fans] ideas are better than mine, I use their ideas instead!” On saying that Aaron laughs happily. “We have such a creative audience so I’m leaving “The Ghost Of Orion” out there to analyse and we’ll compare notes in a years time!”

As mentioned in this introduction for My Dying Bride, Neil points out to Aaron that reading the press release for The Ghost Of Orion is like reading the epitaph of a band who were just done. Wanting to know how both Andrew and himself whilst in the midst of seemingly endless tragedy after tragedy, pulled together to create the album.

“We are like that classic old married couple. We’re the only remaining original members of the band, we’ve been working together for so long…I’ve known him for more than half my life so when you work with somebody and travel around the world with them, you get to know them in such a way where even words aren’t always necessary, you just know what each other’s thinking.”

Listening to the full interview you will hear Aaron’s reasons for not hearing the full complete version of The Ghost Of Orion and how he considered himself a failure as an artist, pulling through and with what song he finally found and rediscovered his importance as the frontman for My Dying Bride. Other topics the two discuss is the obvious acknowledgment of MDB never having toured Australia and if we will ever see them grace our stages as well as what Aaron considers the song that truly articulates and defines My Dying Bride.

MY DYING BRIDE released The Ghost Of Orion on Nuclear Blast.