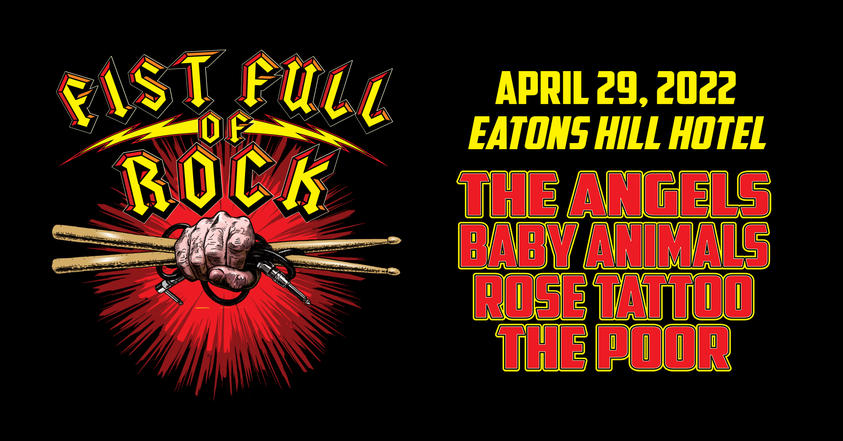 Live music events don’t get much bigger than Fist Full Of Rock, which hits Eatons Hill Hotel in Brisbane this Friday, April 29, and the Enmore Theatre in Sydney on September 2.

Featuring The Poor, The Angels, Baby Animals and Rose Tattoo, Fist Full Of Rock is more than a concert event. It is Australian music history unfolding before your ears performed by four of the best in the business.

Between all four bands they have witnessed, and been directly involved in, some of the highest points of rock music in this country and come together for a limited run of two shows that promises to excite the inner rock child in all of us.

On the eve of the Eatons Hill show, The Angels frontman Dave Gleeson sat down with HEAVY to talk about the show and the past, present and future of four of Australia’s finest ever rock outfits.

We start by posing the question of how all four bands keep delivering the goods year after year.

“I think it’s just the fact that you enjoy playing with the people you’re making the music with,” he replied, “Plus the crowd reaction, and it’s definitely become a much less stressful environment than it was. When you’re coming up through the ranks, and you’re playing six or more nights a week – all that stuff that happens in the beginning – you’re checking artwork, and you’re recording and all that kind of stuff, so it does become quite stressful but we’re at a stage now where it’s all cream. It’s all just great fun to do, hanging out backstage with the other bands and to get out and rock out for your set and make the crowd go off… it’s all just good fun.”

Gleeson has played with and alongside each of the bands for decades, so we ask him for his first memories of each band, starting with Rose Tattoo.

“I never got to see Rose Tattoo in their heyday,” he recalled, “but the first time I ever saw Angry live was when The Screaming Jets supported when he brought out his Blood From Stone album, and we did our spot and went out and watched the band and after the show we couldn’t wait to get in and meet them. We waited ten or fifteen minutes and I knocked on the door and I hear Rob Riley say “come in digger”, because he was playing in the band as well. I opened the door and there was five nude men sitting there – and all big men as well! All very big and very nude and hairy. Rob Riley gets up and gives me a cuddle and Angry stands up in the nude and shakes my hand. When I tell people the story they are like yeah Rose Tattoo, when you go backstage, everyone’s just in the nude after the show. It’s like a game of footy and everyone’s just in the showers having a beer together.”

In the full interview Dave talks us through the first time he saw The Poor, Baby Animals and The Angels, getting back into the swing of playing again after the COVID layoff, the contribution of each of the four bands to the Australian music scene, why you should go to Fist Full Of Rock, what The Angels have planned for the rest of 2022 and more.

Get tickets to Eatons Hill on April 29 here: BRISBANE

Get tickets to Enmore Theatre on September 2 here: SYDNEY