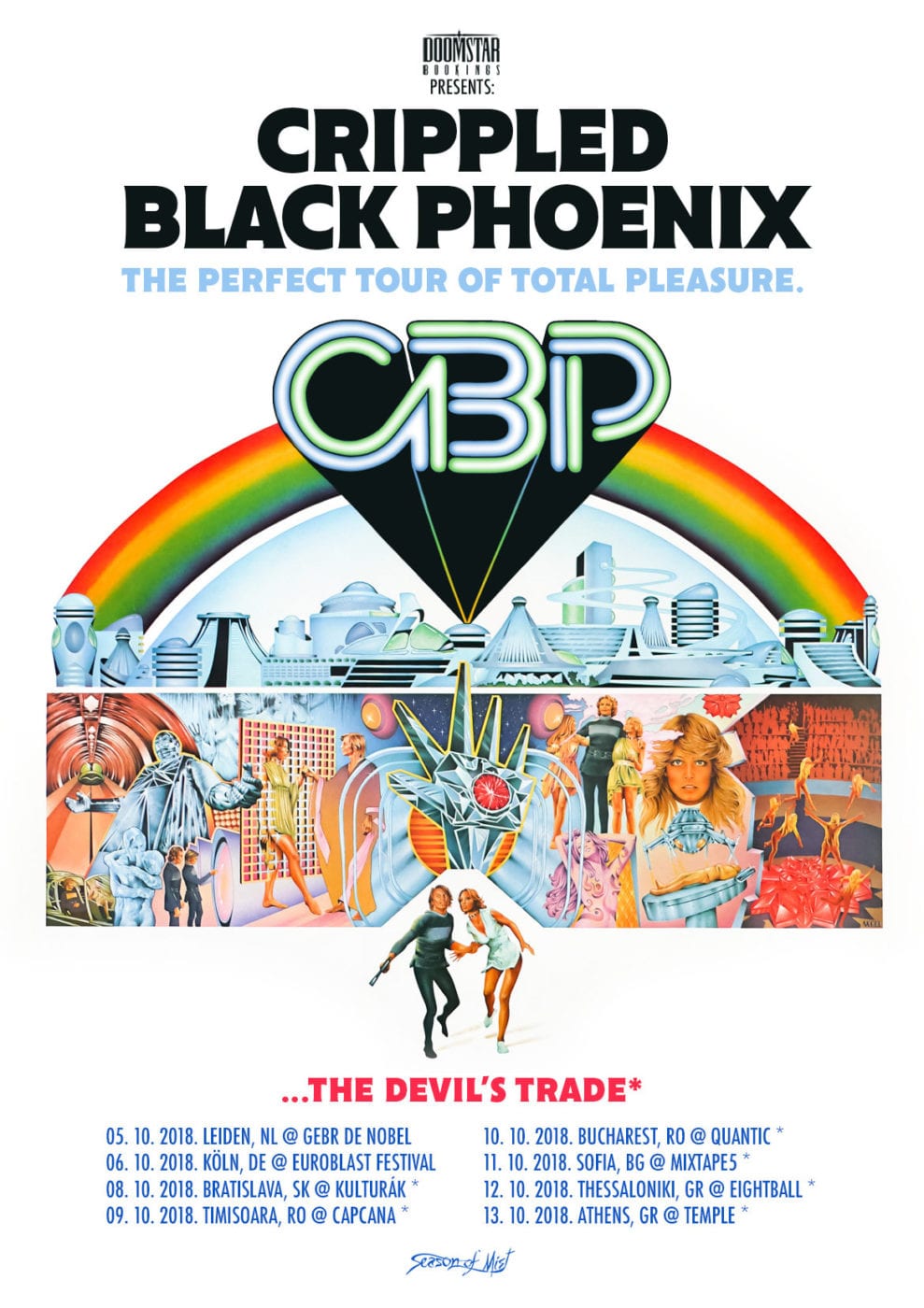 CRIPPLED BLACK PHOENIX are announcing new European tour dates in support of their latest release ‘Horrific Honorifics’ this autumn. The band will be joined by one man gang THE DEVIL’S TRADE on most dates.

The eclectic British rockers will kick off their road rage at the gebr. de Nobel in the Dutch city Leiden on October 10th, and continue to deliver sweat dripping shows in five more countries until a final curtain at the Temple in Athens, Greece on the 13th.

Bands paying tribute to their personal favourites and influences can easily fall victim of two major traps: either slavishly copying the original out of an overdose of respect or twisting a classic into something beyond recognition and failing to capture the essence of a track.

CRIPPLED BLACK PHOENIX have elegantly avoided such pitfalls as the UK rockers pay homage to great artists and classic songs with all due respect on their previously self-released EP, ‘Horrific Honorifics’, while making those tracks their own in sound and spirit without compromising the integrity of the original masterpieces.

Although CRIPPLED BLACK PHOENIX are visiting such a wide range of diverse artists such as SWANS, NO MEANS NO, and THE SENSATIONAL ALEX HARVEY BAND for example, all songs are closely bound together by a subtle undercurrent of despair and deep melancholy.

This touch of darkness comes hardly as a surprise, when taking into account that mastermind Justin Greaves has previously gone public about his personal fight against severe depression. Similar dark themes and traits have already been a hallmark of the UK rockers’ latest full-length, ‘Bronze’ (2016).

CRIPPLED BLACK PHOENIX have always confounded critics trying to pin their style down ever since multi-instrumentalist Justin Greaves recorded his first ideas in 2004 – which earned them tagging attempts ranging from “stoner prog” to “freak folk” to “psychedelic doom”. Despite the wide range of musical leanings within their albums, there are a unifying dark streak and sombre melancholy running through the songs. Founder Justin Greaves had already made himself a name as drummer for IRON MONKEY and ELECTRIC WIZARD among others. When the multi-instrumentalist finally decided to stand on his own musical feet, CRIPPLED BLACK PHOENIX was born as a project. This involves a changing cast of musicians and live set-ups, which mirror the ever-ongoing evolution of the band and the fact that the songs were mostly not composed with their live performance on mind.

‘Horrific Honorifics’ will enhance the understanding of CRIPPLED BLACK PHOENIX‘ universe as well as expand its dimensions – a beautiful tribute to music.