When prog metal supergroup Sons of Apollo announced that they were going to release an album, music fans the world over collectively lost their shit. When you consider that the band is composed of legends Derek Sherinian, Mike Portnoy, Billy Sheehan, Ron “Bumbefoot” Thal and Jeff Scott Soto, it’s not too hard to imagine. Sherinian, for one, is thankful for the hype, but not surprised.

“We knew that we had a really strong record, so we’re not surprised [at the reception]. But it’s really nice to actually see it and know that the people have this record and they’re really embracing it”, he comments. “It’s so exciting to build something from the ground floor up, and that’s what we’re doing with Sons of Apollo”.

There’s an integrity to their debut full-length, ‘Psychotic Symphony’, that draws on their experience listening to and making the music that started it all without pretending to be something that they’re not.

“We’re not trying to be like, ‘this nu metal band is popular now let’s try to go for that sound’. I mean that would be ridiculous.”, Sherinian laughs. “So when I say old school soul it means that we’re from that era and we love that sound but modern in that the tones on our instrument are all state of the art and it’s all heavier. It’s more like on steroids than on Viagra”, he jokingly clarifies. “It’s more atomic”.

He adds that “it helps that all of us are old (laughs). We all grew up with that great era of music in the 70’s and great bands like Led Zeppelin, AC/DC, Aerosmith. That was the music that we heard when we were in our teens, so it’s in our DNA”.

In a music industry where pop and rap continue to dominate top 50 playlists, there has to be something about prog and rock in general that continues to attract not only legacy fans but young people. When Sherinian is asked what it is, his answer is simple: “I feel there will always be people that love great rock music, no matter what’s popular to the kids”.

“It’s cool when you have a bunch of fifty year old’s that are just really being honest about their influences and keeping it real. I think that as long as we play what we love to do the most and that’s this style. We’re from the 70’s and 80’s, early 80’s hard rock, and we also are virtuoso’s. So we mix the two. The main thing is the songs will always come first, and the virtuosity is just the icing on the cake.”

It is, to a great extent, about the tiny details to Sherinian. He’s a stickler for the small things, having produced this record with Portnoy to get it all right.

“I mean the guitar sounds now compared to the guitar sounds in the 70’s are a lot better and modern sounding right away. But a lot of the keyboard sounds that I use are from vintage instruments from the 70’s. My organ is, in fact, from 1962. So it’s a mix, it’s like a hybrid of modern and old school, stylistically and sonically.”

There may be some modern tones in the sound of Sons of Apollo, but it’s also interesting to wonder whether Sherinian’s mindset has changed, having observed the changes of the scene he’s been a soldier in since the 80’s.

“Once upon a time an artist could make money selling records and there wasn’t any downloading and stuff (laughs). So that’s very significant. Touring, it’s all the same. It’s going from one city to another, travelling with all the gear, setting up and putting on a great show for the people. Some of the lights are more computerised and stuff like that, but the other stuff is the same”.

For this record in particular, bringing the music to the people is a pressing matter for Sherinian. Sons of Apollo will more than definitely be spreading the prog cheer to the crowds that care, something that remains close to the musician’s heart. His principle is that “if you make a record and you have fans around the world, you have to bring the music to the people. They can’t all come to you. That’s part of the gig, and it’s a pleasure”.

Aussie fans will be happy to do that Sherinian has confirmed that they will “absolutely come to Australia”. He doesn’t have dates locked down, but states that “it’s definitely a priority”. There will come a time when we can all enjoy the ‘Psychotic Symphony’ together. 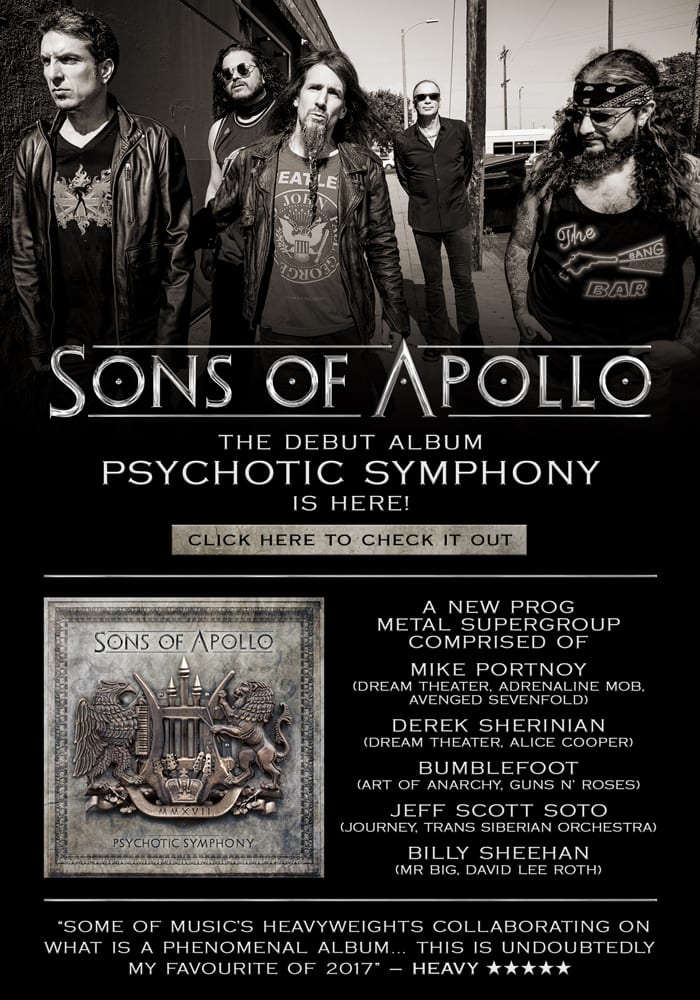