This edition of HEAVY ROOTS sheds some light and darkness upon one tree that spreads deep through many bands today. The tree is that of the iconic group known as Acid Bath. Although their career was short lived, its roots continue to grow at a rapid rate through other side projects and some big name bands.

Acid Bath formed in 1991 south of New Orleans, from the ashes of two bands; Dark Karnival,  which featured Audie Pitre, Sammy “Pierre” Duet, and Tommy Viator and Golgotha, featuring  Dax Riggs, Mike Sanchez, Jimmy Kyle, and Jerry “Boon” Businelli. Golgotha released a demo in 1991 aptly titled Wet Dreams of the Insane. The band went through a line-up change with Pitre taking over bass from Chad Pierce. The merging of the two bands came with a name change to Acid Bath.

After releasing a number of demos as Acid Bath, most notably Screams of the Butterfly in 1992, their debut full-length was released in 1994. When the Kite String Pops featured the infamous album art of a serial killer clown who went by the name of John Wayne Gacy. The artwork was created in prison while he was waiting to be executed and it doesn’t get any darker than that. 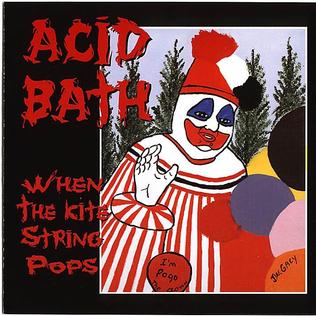 The album featured greats such as Finger Paintings of the Insane, Dr Seuss is Dead, Dope Fiend and the song the Scream of the Butterfly from the same demo. This line-up  featured Dax on vocals, both Mike and Sammy on guitars, Audie on bass and Jimmy on drums

The final album for Acid Bath was released in 1996, Paegan Terrorism Tactics, which featured more dark gems from the mind of Riggs such as Paegan Love Song, 13 Fingers and Bleed Me an Ocean. There is not one bad song on the two albums released by this band in this writer’s humble opinion.

Acid Bath disbanded in 1997 due to the death of bassist Audie Pitre who was sadly killed along with his parents in a horrific car accident. A drunk driver drove straight through a stop sign, with the only survivor being Audie‘s brother Kelly from doom metal outfit Vual.

Sammy also formed the mighty Goatwhore in 1997. From the debut The Eclipse of Ages into Black (2000)  to their latest Constricting Rage of the Merciless (2014), Goatwhore continue to spread the roots of Acid Bath with six killer albums under their belt.

It looks unlikely that Acid Bath will release any more material, as other band members stated ‘there is no band without Audrie‘ when Jimmy Kyle reached out to Corey Taylor in 2014. Let’s face it; no one could replace the vocal stylings of Dax and the thought of anyone else is unthinkable for most fans.  Band members denied this proposition, saying it was a rumour and if anything they would do shows in tribute to Acid Bath.

Dax started a solo project in 1997 going by the moniker of Daisyhead & The Mooncrickets. Only two records surfaced; Skeleton Circus Derails and a self-titled fourteen track record.

Dax and Mike went on to form the group Agents of Oblivion, releasing a demo and a self-titled full length in 2000. The album featured such greats as Endsmouth, Phantom Green, and final track on the album, Big Black Backwoods, which featured a chilling sample from Harmony Korine‘s cult classic Gummo.

After the short-lived Agents of Oblivion, Riggs formed the indie rock group Deadboy & The Elephantmen, with a sound in a similar vein to the White Stripes. They released two notable records, If This is Hell, Then I’m Lucky (2000) and We Are Night Sky (2005), with the Song Mechanism EP was released in the interim. The band were also guests on The Henry Rollins Show and their live performance can be seen below.

Riggs released two solo records after the demise of Deadboy & The Elephantment with, We Sing of Only Blood or Love (2007) and Say Goodnight to the World (2010).

Acid Bath left us with two classic albums that will without a doubt stand the test of time. Their legacy continues spreading those deep, dark roots with no end in sight.