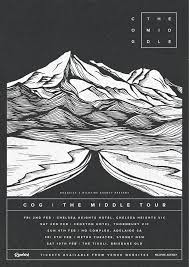 Sydney progressive rock trio Cog are ready to release their first new music since Sharing Space. Following a sold-out 2016 tour, Cog are back with a mammoth new track, The Middle.

The Middle is the first new song from Cog since 2008’s Sharing Spacealbum. This new offering was recorded in the band’s very own Studio 101 in the Byron Bay Hills. Engineered, Mixed & Mastered by Forrester Savell (Karnivool, Shihad) The Middle is just the start.

The band formed in 1998 by former schoolmates Flynn Gower (vocals, guitar) and Lucius Borich (drums), who had previously played together in The Hanging Tree, a late-’90s stoner rock band. Shortly after forming and writing some initial material, the two incorporated Luke Gower, the brother of Flynn, to play bass.

Now a trio, Cog proceeded to establish themselves as a popular gig attraction in Sydney and the surrounding state of New South Wales, and following the release of a 2000 demo recording, Pseudo, they were soon signed by the independent label Little Samurai, resulting in a few EP releases: Just Visiting, Pt. 1 (2002), Just Visiting, Pt. 2 (2002), and Open Up (2003).

The band was then signed by former Universal Music Australia managing director Paul Krige’s independent label, Difrnt Music, and in turn went to California to work with Sylvia Massy, who had produced Tool’s Undertow (1993) and who also had a close affiliation with producer Rick Rubin, working as an engineer with him on albums such as System of a Down’s 1998 self-titled debut. Cog’s resulting full-length album debut, The New Normal (2005), became an Australian rock sensation, debuting in the Top 20 of the albums chart and hitting number one on the Australian Independent Recordings (AIR) chart; moreover, the album spawned the popular radio single Run, which reached the Top Five of the AIR singles chart.

Cog recorded their follow-up album, Sharing Space (2008), with Massy once again, and the album proved even more successful than its predecessor, reaching number two on the Australian albums chart and spawning the
Top 50 hit What If.

The band hung up their guitars back in 2010 after releasing three albums since their 1998 formation, including J Award-nominated The New Normal. 2016’s gigs were the first live outings for Cog in nearly six years, following their dissolution in 2010.

To celebrate the release of The Middle, Cog are hitting the road again for a handful of national tour dates next year, visiting fans in Melbourne, Adelaide, Sydney and Brisbane across February.