This year’s Download Festival is already turning into an embarrassment of riches if you are a fan of alternative music. With the likes of Ministry, Testament, Deftones and My Chemical Romance already committed there is little wonder that many music fans are already in raptures. But wait… let’s not forget about Clutch who have used Download as a way to visit Australia for the first time in five years.

That is clearly a fact that lead guitarist Tim Sult is deeply embarrassed about when HEAVY Magazine gets the opportunity to sit down and have a chat with him. “We didn’t actually realise that it had been so long since we had been to Australia,” he says apologetically. “We are so sorry that you have had to wait five years for us to come down. We’ve been playing lots of shows and driving around, flying around mostly in Europe and the US so I guess time slipped away from us and we didn’t realise that we hadn’t been to Australia.”

As we talk about Clutch and their Australian fans I carefully slip in a little question about whether or not fans can expect a Clutch headline tour sometime and after a long pause Sult gives me a one world answer. “Yes,” he says obviously not being able to say any more but laughing straight afterwards.

We quickly turn the attention back to their set at Download and while we the fans maybe excited about the festival hitting town it soon becomes obvious that the bands are excited about being able to play there as well. “It is pretty amazing for us,” says Sult with pure excitement clear in his voice. “To be able to play huge shows with huge bands it just amazing. Download in the UK has always been amazing for us and the last time we played there was one of the most mind-blowing experiences ever.”

“Festivals are such a local thing now. For example say you live in Wisconsin and now over the last five years you now have a huge rock festival that is close to where you live so you have a yearly event to attend every year. Especially in Europe with the metal festivals, those huge metal festivals sell out before the line-ups are even announced. So a lot of times it has become a family tradition to go to the festivals… or it is just a teenage thing where you go to get drunk!”

As a member of Clutch Sult also says that it festivals like Download that he believes has kept the band going for so many years as it helps them build their fan base. “Oh yeah,” he says with a huge emphasis on his answer when I ask if the band attracts new fans at festivals. “That it really the only reason that we are still here right now because we get that chance to go out and play shows in front of people who have never heard of us, we’ve basically been doing that ever since we started. So being able to play at a festival is like doing that but being able to do it on a much bigger scale. I think that when we play at a festival there is a good chance that most people have never heard of us, so it is good for us to play in front of even one person who has never heard us before.”

Keeping that in mind Sult admits that it does change the way the band approaches playing at festivals over when they are doing an headline show. “Yeah maybe it has over the past few years,” he explains. “We’ve come to realise that perhaps playing our bigger songs is a better idea at big festivals. Whereas if we are playing at our headlining shows we can play more of our weird material I guess you can say.”

“Just recently we have been taking notice of Spotify to see which songs are big at the time,” says Sult as we delve further into how they will put their set list together for Download. “That makes it really interesting but there are always a few songs that are at the top of the list but it is always interesting to see the other songs kind of rotate in and out. We do like to mix things up as much as possible though when it comes to our set lists, that’s for sure.”

As we start to wrap up the interview Sult decides that once again he needs to apologise to the Australian Clutch fans. “Again we are so sorry,” he says and it is easy to tell he means it. “We’re sorry we haven’t been for five years… we are so, so sorry Australian fans.” 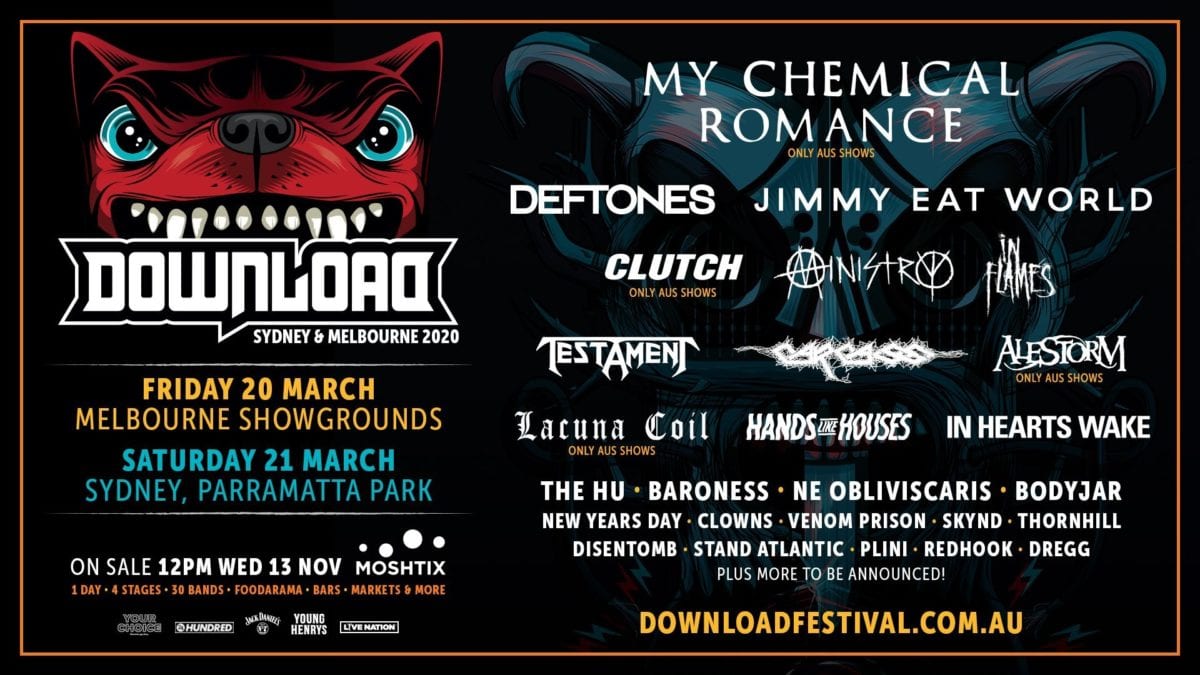