Bird’s Robe Records, in collaboration with US label Equal Vision Records, have announced they will be releasing First Temple, the cult classic debut full-length from Australian progressive rock outfit, Closure in Moscow, on vinyl for the first time on Friday March 2. The news comes alongside the announcement that the band will be playing the record in full while supporting Protest The Hero on their North American tour during March & April, as well as additional headline dates across the US.
The band have also announced an exclusive Melbourne headline show at Workers Club on Saturday March 3rd, before departing for their first North American tour in 8 years.
Closure In Moscow have received critical acclaim internationally for their stellar live performance and avant-garde sound in the decade plus since they formed in Melbourne, Australia. First Temple saw the band breaking in the United States upon its release in 2009 and has since seen them become regarded as one of the most beloved acts in the world of progressive rock.
Following high profile tours with Coheed & Cambria, The Fall of Troy, MEW & The Dillinger Escape Plan in 2016-17, the band are currently working on their forthcoming third full-length album.
Pre-orders for First Temple on vinyl & tickets for their upcoming shows are available at www.closureinmoscow.com. 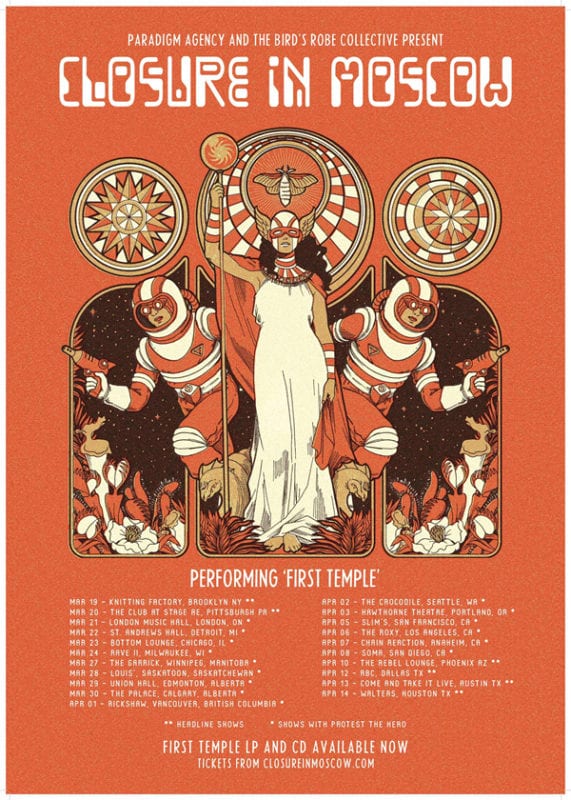