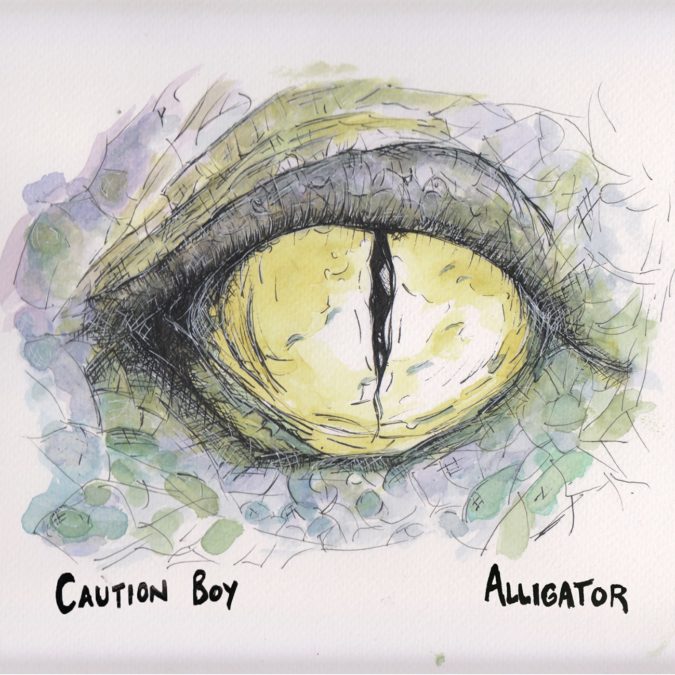 Seth Efrica, not the place you’d expect to spit out a punk rock/gunge act, but apparently, I’m about to listen to some kind of mash up of Nirvana, The Melvins, Alice In Chains and Motorhead.

The band is Caution Boy and the album is titled Alligator. This is the band’s first full-length album as a 3-piece, following 9 albums as the solo project of its creator Andi Cappo.

A rocky little guitar riffs kicks off the title track Alligator which instantly takes me back to the grunge movement of the early 90s. The production is of similar quality to what you would expect back then, with a really dry, un-processed sound. That guitar tone though, it’s terrible, but it fits perfectly with the style of music being portrayed. It’s kind of catchy in a garage grunge band kind of way, but kind of not. See you later, alligator.

Silence The Screams kicks off with another rocky guitar riff, but this time with a little more of a metal feel to it. If only the guitars were a little more distorted, it may have grabbed my attention more. Quite a familiar sound to this one but I can’t quite pick where it fits in, maybe Alice In Chains, maybe Nirvana. The riffs are very familiar sounding, and almost
likeable. Coolest part of this song is the clap section in the middle followed by a very quick bass lick. The song even hit a classic chug section towards its finale. Not a bad song, actually!

A distorted bass line rolls us into Consolation, and it’s a nice consolation after that god awful guitar tone. Until, of course, an even worse guitar tone blesses our ear holes. Tone is in the ear of the listener though, or the balls as some claim, and I’m sure the choice of sound is reflective of the genre that’s trying to be recreated here, so I’ll stop being a tone elitist and just focus on the music. This one sounds like something Kurt’s skank missus would have come up with.

Ever the Optimist opens with a piano sample, which I’m sure I used back in my gangsta rap days, but never mind that bit of useless information. This tracks actually a bit of a rocker, and I’m hearing a slight reference to Motorhead whom the band claims as one of its influences. Although the guitar tone still sucks, the semi distorted bass is pushed through a little harder on this track, which gives it a unique round fuzzy sound.

The band just stepped up there Motorhead game with the next track titled Swallow Me Whole. This is the fastest and heaviest track so far on the album, and I’m almost digging it.

The production almost seems like each track was recorded in a different session, in a different studio, with different kits, amps and guitars. It makes the album feel very disjointed and more like a demo than an album.

Next up is Mutual, which drops the production to a whole new low and sounds like it was recorded on a 4 track in someone’s garage. Maybe it was, maybe it’s a live track, not sure, but it very weirdly sounds like something from Superheist’s 8 Mile High EP.

So Sick kicks off with a bouncy little guitar riff that would fit well at the start of a Nu-metal track, but then it dips into some real weird little slow-paced drum, bass and clean vocals.

The riff comes back in, but with less impact. We get a bit of a rap section, which would have fit well with a heavier version of the main riff. It’s almost like this song has been written with the intent of doing exactly the opposite of what you would expect next. It’s not a bad track though, once the jolting bass line grabs hold of you.

Big rolling toms introduce us to Hue as the guitars pick their way across single notes of a simple chord progression. This one definitely has that mid 90s grunge feel to it, of about the time when all of our favourites were smacked out on the brownstone. It’s a slow burner, and it drones out in parts, but luckily it picks up pace in its last minute and almost leaves me feeling like I want some more. Probably not, though, I think I’m done with this one.

If you like grunge, like dirty op-shop clothing style grunge, you’ll probably love this one. I didn’t hate it, but I don’t really rate it, as I think it’s about 30 years too late. But hey, Nu- Metal is apparently making a comeback, so why not grunge too. This world needs a bit of an old school 90s style wake and bake up!

PrevPrevious.FACE TO FACE: No Way Out But Through
Next.ALL HOPE REMAINS: A Silent WarNext