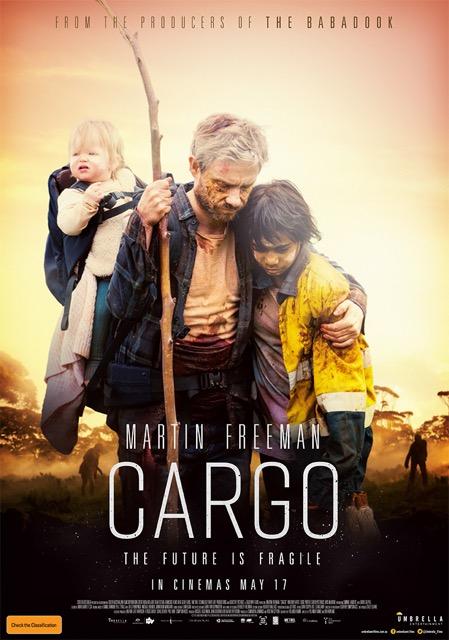 Umbrella Entertainment today launched the trailer and poster for CARGO, the new film from the producers of THE BABADOOK starring Martin Freeman (Sherlock, The Hobbit), and announced the Australian national release date as May 17.

CARGO is an emotional, ticking-clock story of a father’s quest to get his infant daughter to safety, set in a post-apocalyptic Australian outback ravaged by an unknown virus. With only 48 hours to find a foster-carer for his daughter, a glimmer of hope arrives when he meets a young Aboriginal girl who is trying to save her own father.

CARGO was written by Yolanda Ramke and directed by Ramke and Ben Howling, based on their Tropfest-finalist short of the same name with 14mil+ views on YouTube. The film was produced by Causeway Films’ Kristina Ceyton and Samantha Jennings, and Addictive Pictures’ Russell Ackerman (MAMA) and John Schoenfelder.

Umbrella’s Head of Theatrical Dov Kornits said “CARGO is one of the best and most commercial Australian films of the year. The reaction at the film’s World Premiere at the Adelaide Film Festival last year was overwhelming, and we saw first-hand how audiences respond to the emotional journey of this film.”

CARGO will release in cinemas across Australia on May 17, while, in an Australian-first, the rest of the world will be able to stream CARGO from May 18 via NETFLIX.