Camp Cope have today revealed their music video for “searing” single ‘The Opener’ filmed at Sydney Opera House, and announced local supports for their upcoming March national tour with Chastity Belt(USA). In what will be some of their only headline shows for 2018, Camp Cope are touring in support of their forthcoming 2nd album How To Socialise & Make Friends, out Friday March 2 through Poison City Records.

Watch the video for ‘The Opener’ here. Tickets to remaining shows are on sale now – full ticketing details are listed below. How To Socialise & Make Friends (LP) is out March 2 and is available to pre-order now.

After selling out two shows as part of Vivid LIVE, Camp Cope returned back under the iconic Sails to film their new single ‘The Opener’ live in the stunning Utzon Room – named after Danish Architect Jørn Utzon, who designed Sydney Opera House. The video shows Camp Cope playing against views ofSydney Harbour and the Botanic Gardens, the vibrant tapestry of Utzon’s own design which adorns the western wall, and the dramatic concrete beams of the Sails across the ceiling. This is the first time a punk band, and a band of only female members, has been filmed live at the House.

Camp Cope are touring this March in support of their forthcoming 2nd album How To Socialise & Make Friends, out Friday March 2 through Poison City Records. Joined by Chastity Belt (USA) for the national run, Adelaide and Melbourne have both sold out, with a second Melbourne show at Thornbury Theatre on Thursday 15 March on sale now. Erica Freas (RVIVR) will join them in Hobart and the newly added 2ndMelbourne show, with Waterfall Person opening for the sold out Melbourne date. Kelly Lloyd (Screamfeeder) will join them in Brisbane, She’s The Band opens at their sold out show in Adelaide,Moaning Lisa will support in Canberra, with The Nah opening in Wollongong and Sports Bra in Sydney.

Camp Cope’s forthcoming sophomore album How To Socialise & Make Friends anchors on the cycles of life, loss and growth through resilience and those moments of finding and being yourself. It celebrates the joys of being an independent unit and knowing who you are without any influence from external factors, and non-romantic love felt towards friends; the women who shape you and women working together to find strength in numbers. A raw account of sexual assault and the feelings of isolation that follow is painted, while the album closer shows Georgia solo, singing of her late father’s battle with cancer and their close friendship that prevails, even in death.

First single ‘The Opener’ is an honest portrayal of their experience as women in music. It was labelled“searing” by Pitchfork and “all-too-real” by SPIN, with Stereogum including it in their best tracks of the week. 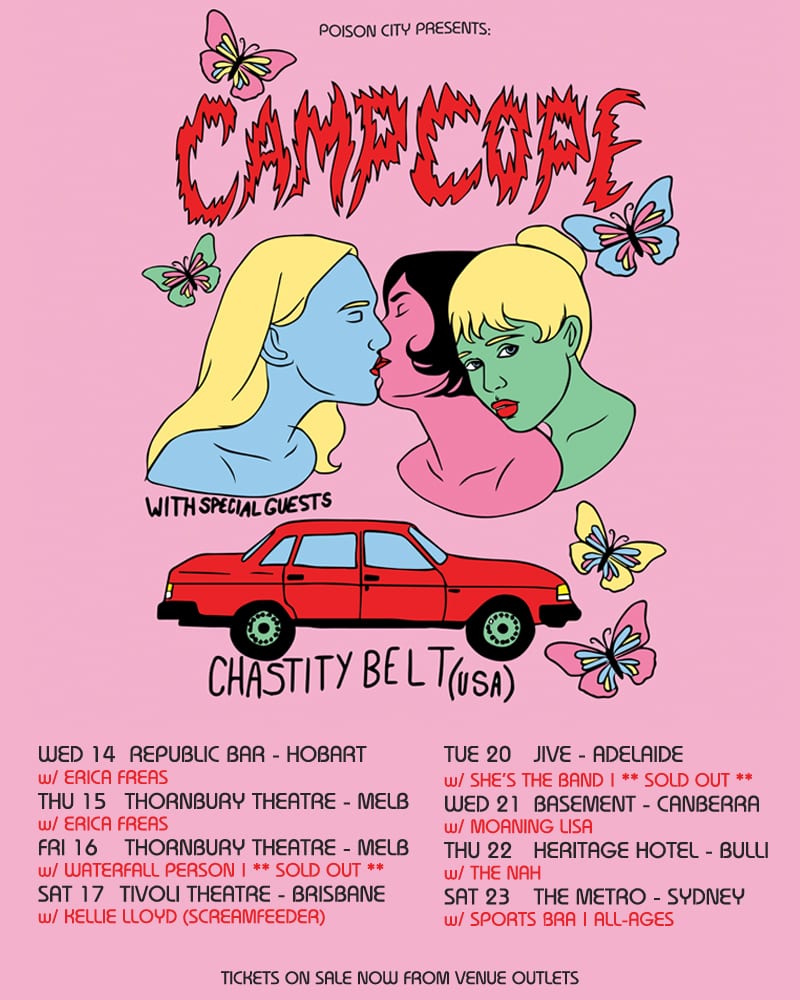