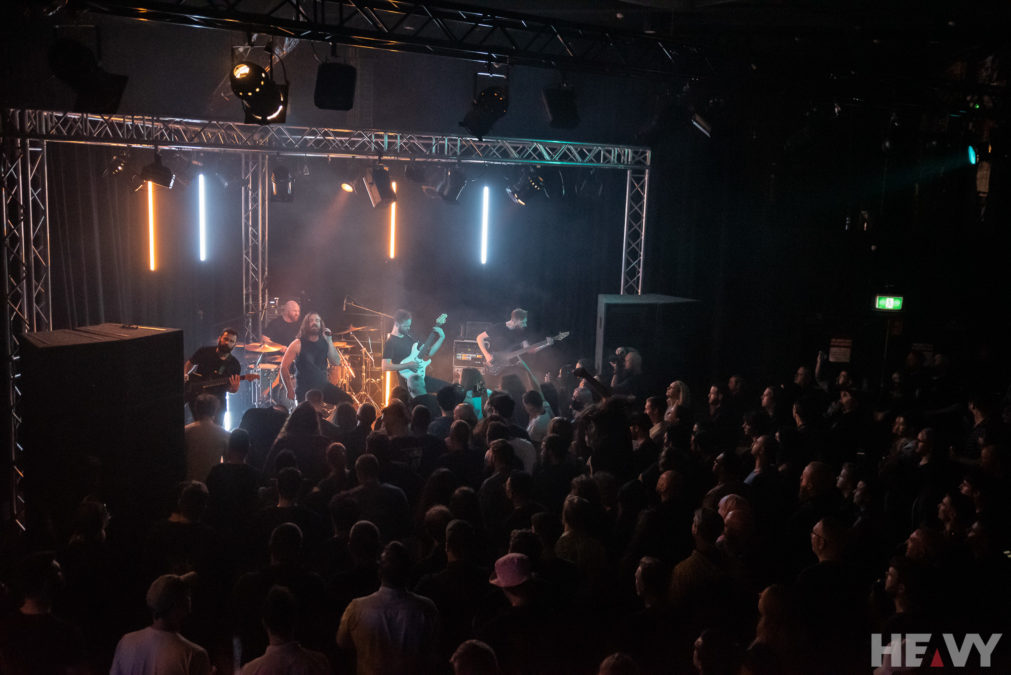 Joining them for the much anticipated tour were Central Coast natives Reliqa and Acolyte from Melbourne.

The Sydney show was held at the Metro Social venue, a relatively new and under-utilised space that allowed for a very intimate and dreamlike atmosphere, whilst still offering the familiar Metro live music experience in the heart of the city. From the get go dozens of prog-hungry fans flocked onto the spacious floor, and for many this was a long-awaited fix of quality local heavy music that hasn’t been as easily accessible due to covid.

Opening the night were Melbourne prog magicians Acolyte, who like Caligula’s Horse, have had significant time between tours and releases. Their 2021 masterpiece album Entropy was one of the highlights in heavy music for that year, and the anticipation of hearing these new songs was equally felt by the crowd and the band.

They launched into Resentment and the energy was instantly infectious as it radiated back and forth between each member. You could see how much reconnecting with their Sydney fans meant, and you could not wipe the smile off frontwoman Morgan-Leigh Brown‘s face. Her stunningly powerful vocals resonated through the space as she held each note with operatic control.

Acolyte demonstrated why they are one of the most entertaining prog bands in the country, as they tightly weaved a complex web of addictive Tool-esque groove, flowing melodic hooks and highly prolific technical prowess. They did not put a foot wrong during their set, mesmerising an adoring crowd with a master-class in progressive rock, concluding their set with the epic title track from their latest release. A hidden, but not so secret gem that fans of the genre must experience if they love soaring vocals, massive riffs and virtuosic keyboard arrangements.

Filling the middle slot for the evening was Reliqa, a band that have been riding a recent wave of success whilst showing a maturity well beyond their years. Despite being without their bassist, they powered through, showing they are a professional outfit that are cool cats under pressure.

Fusing a range of musical influences, they provided a wide sonic palette that was enjoyable for all. Playing their most popular tracks like Hangman and Mr Magic, the fans were also treated to a brand new song that has never been performed live before. Exhibiting a wide range of vocal styles, Monique Pym showcased her multi-instrumentalist ability as she effortlessly moved from keyboard to mic. Reliqa were a relentless blast of positive and fun energy. They proved they are well prepared for the upcoming Monolith festival with Karnivool and Cog in August.

Finally, the mighty Caligula’s Horse, the crown jewel of the Brisbane progressive rock scene, and a band that is well respected and adored by many, both locally and abroad. They wasted no time kicking into gear, opening with the first two singles The Tempest and Slow Violence from their 2020 release Rise Radiant. Those who had never experienced a C-Horse live show, were treated to a performance that matched some of the most revered and acclaimed international bands.

Led by Jim Grey on vocals, Sam Vallen on lead guitar and Josh Griffin on drums, the band has experienced some recent line-up changes with the addition of Dale Prinsse on bass (ex Opus of a Machine) and welcoming back founding guitarist Zac Greensill. The endearing connection between each member on stage was something special to behold, and equally entertaining was frontman Jim’s interaction with his fans between songs. Responding to each friendly heckle with his intellectual cheeky wit, we were gifted with a comedy set in addition to an amazing musical performance.

The level of musicianship was amplified by the technical ability of lead guitarist Sam, showcasing a talent that puts him amongst some of the top guitarists in Australia. Every note was played with complete emotive conviction and control.

Caligulas Horse navigated a set that touched on all elements from their illustrious career, including songs like Dark Hair Down from the early days, right through to crowd favourites like Dream The Dead and Marigold. After three years between drinks in Sydney, their performance delivered everything a die hard prog fan would expect.

All three bands collectively made this a night to remember. The Metro venue staff and security were extremely warm and inviting, and the stage lighting was a dramatic and colourful showcase that complimented the music brilliantly.