The Cadillac Three and Legacy 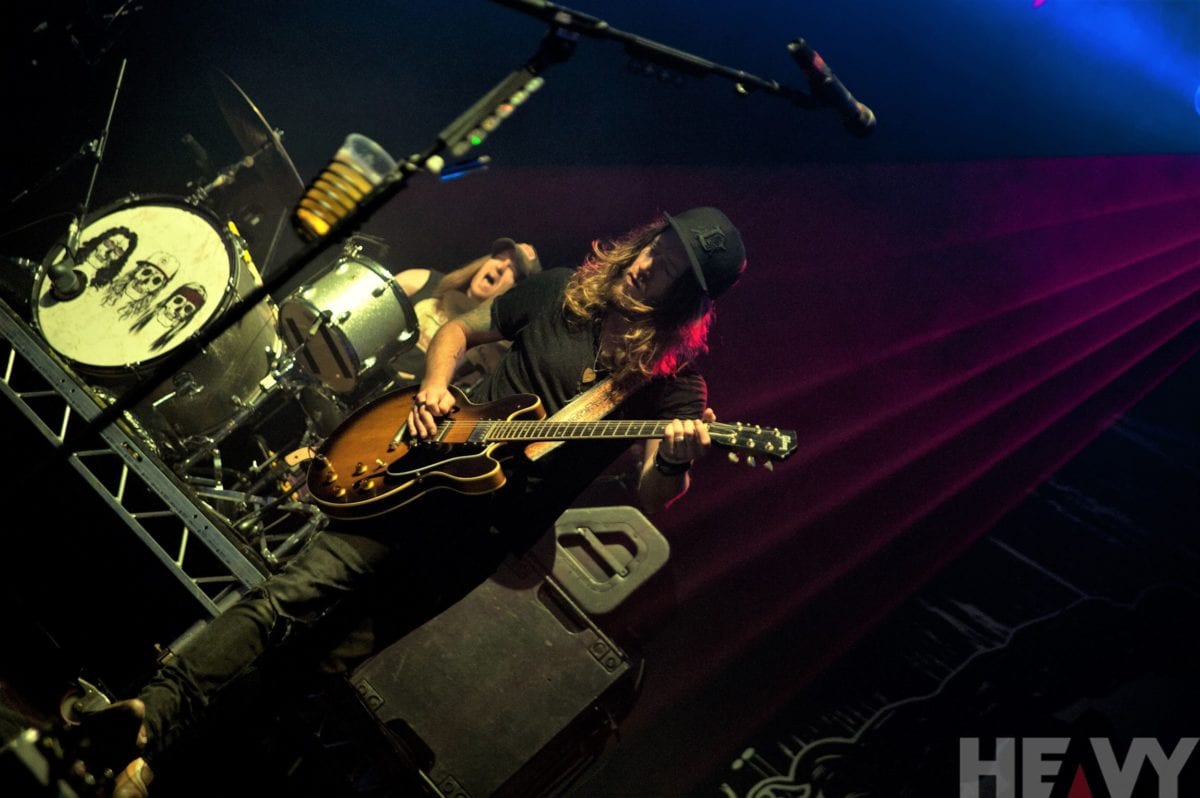 In true mid-tour, pre-show fashion, The Cadillac Three are feeling a touch hazy. Slightly squinting under the garish fluorescent lighting of the LCR’s green room in Norwich, and frontman Jaren Johnston clutching at a glass of equally garish and fluorescent vitamin-laced liquid, the three southern gentlemen are grimacing behind their brave-faced masks. Having recently released an album, Legacy, filled to the brim with countrified sophistication, TC3 are queried on their progress in musical wisdom and personal growth since their debut release: “The way we felt after London last night, I’m not sure how much wiser we’ve grown at all”, drummer Neil Mason responds with a wry smile.

Alcohol-fuelled decadence aside, it’s clear that TC3 is growing as a band the way the Mississippi River swells during flooding season. A year that has brought them a main-stage gracing of Download Festival and a treasured sold-out headline show at the Ryman Auditorium in Nashville, TN, TC3 are making waves internationally, yet hold a smidge of ambivalence over their success. “Download was probably the most people we’ve ever played for at one time, but we were the only country western band at a metal festival”, recounts Johnston. “We felt like tiny people up there”, affirms Mason.

As inconsequential as they may have felt during the performance, Download was the sort of boost TC3 thrive on, in contrast to a certain show that haunts them to this day: “We’ve got a couple of [bad experiences], but I’ll tell you exactly where [our worst one] was”, Johnston smirks. “We were in Delaware on a beach…”; “Yeah, there’s a picture – just literally two kids in front, a mom and then us on stage, and it was like 100 degrees in the sun,” Mason interjects in jest. “They could not give a shit. That was an all-time low,” Johnston laughs, “But it pays to make you humble every now and then.” “[Our live experiences] keep getting better though. Every time we come over here [to the UK], it really goes up a notch,” beams Mason.

Not quite certain on why they’re packing the punch that they are, especially in the UK where their cultural roots of the U.S. South are as far removed as possible, they’re all clear on the unique edge they bring to the gambling table of the music industry. “No one [else] is really doing it as far as just three dudes, and a lap steel guitar goes. You can’t even rent a lap steel over here – believe me, we’ve tried!” declares Johnston. “I think we look and sound very unique. I’m doing something nobody else on the planet is doing”, shines lap steel big cheese Kelby Ray. The sheepish Johnston also recognises the continual evolution of his own produce, a factor that introduces an incalculable characteristic to TC3: “I don’t really know how to play guitar,” Johnston confesses with sincere earnest whilst this reporter struggles to hold down her eyebrow that is rising in squabble to this statement, “I’m kinda just winging it. I’m more like a sponge – when I’m watching something, I take it in, then I’ll find myself doing something I saw. It’s not as good [as the original playing], but it’s my own thing.”

As evidenced in his lyrics, Johnston is a tender soul, despite his raucous stage demeanour. Consequently, the critical masses of self-prescribed music experts who put their two cents in on social media tend to hit him below the belt. “[The band] do make an effort to keep things [on social media] from me sometimes”, Johnston chuckles. “Last night, somebody way down a comment thread posted ‘they should be opening up for Brothers Osborne [TC3’s current support band]!’ So I sent that lady a message saying ‘thanks’ with a sad face,” he grins. “She didn’t reply yet; I don’t think – she probably doesn’t even know who the hell I am!” Mason has a far more illegitimi non carborundum ethos to such commentators (“I really don’t give a shit”), and Ray announces his slightly more prudent approach: “You’re not gonna please everyone, so don’t worry about it.”

Despite such disparagement, TC3 don’t waiver on their music-riddled destiny and remain their own directors. “For all the people that would say something slightly negative, you also see people like ‘this is my favourite thing you’ve ever done’,” Mason reasons. “So I think we have to do what we’re feeling, what we’re excited about.” And that’s exactly what TC3 did with the self-produced Legacy. But with the release of a well-received album comes the greedy beckoning of fans for the next one. So where are TC3 at right now? “We’re trying to work on the new one as we speak. We’ve gotta bunch of songs ready,” Johnston discloses. “But we haven’t got to the point where we’ve figured out what was missing [off of Legacy], so we’ve got a way to go [with the new album]. But you kinda just have to experiment and see what points you in the direction of how to finish it”, Mason professes.

So the ever-turning wheel of TC3 is in full, rapid spin and displays no signs of creaking to a halt. Although Legacy offers a seemingly conclusive statement of musical contribution, TC3 is far from finalising the heritage they’re due to leave – there are far too many musical alleys to explore (and beers to be consumed) first.

PrevPrevious.Rosetta Chat About Their Aussie Tour
Next.Get Stuck In With The Marshes Director Roger ScottNext