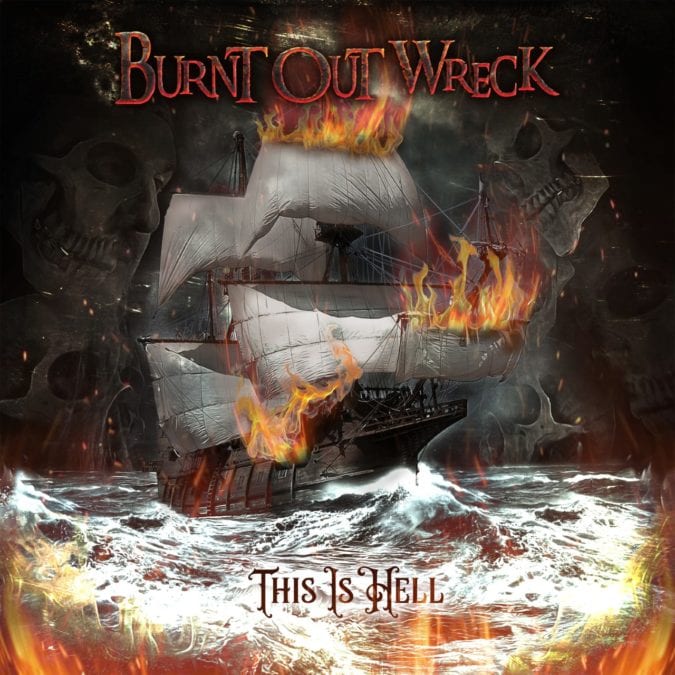 Burnt Out Wreck – This Is Hell

Released on 11th October ‘This Is Hell‘ is the second album from hard-rocking outfit Burnt Out Wreck. Following on from their deservedly praised debut, ‘Swallow’, this long playing offering opens up in typically bone-crunching style withrecent single “Dead Or Alive”;a rip-snorter with frontman Gary Moat opening up those vocals in prime Bon Scott style. Moat flanked by Adrian Dunn (lead guitar), Miles Goodman (rhythm guitar), Alex Carmichael (bass) and Paul Gray(drums), his cohorts in crime, wastes no time getting feet stomping and heads nodding. This is bonafide rock in a classic style for the21stcentury for sure.

“Positive” continues with a similar theme to the opening salvo, but there’s a more melodic edge with a sing-a-long chorus and a knowing nod to the gods of 80’s metal. Song-writer Moat demonstrated a tongue in cheek knack for innuendo on Wreck’s 2017 debut and serves up more with a six minute plus slice in the form of the instantly accessible “Paddywack”. With a Quo-like rhythm interwoven with an AC/DC lead melded with those cheeky lyrics – there’s a glint in Moat’s eyes no doubt – it’s a recipe that guarantees this track’s going to be careering headlong down the highway to rock n’ roll hell. That chorus will be in your head for sometime!

“Headfuck” enters the ring with a low rumbling intro; the prelude to the storm heading in the listener’s direction. Snarling and growling this is a dark, gritty portion of Moat’s devilment that hits hard in the very pit of your stomach; but it’s a pleasurable pain that has you returning begging for more.

Before you can catch breath The ‘Wreck continue apace with “Guitars Electrified”;commencing with a catchy statement from Dunn before he is joined by Goodman, Carmichael and Gray in driving along the beat before Moat rasps and invites “Come on in and see the show”. This one does exactly what it says on the metaphorical tin; the gods of rock aresmiling.

Album title track “ThisIs Hell‘, simply put, outguns AC/DC; setting down a marker of quality foot-stomping rock replete with hooks, riffs and beats to die forserved up in a seething vat of magmatic vocals hewn from fiery lava.There is no relenting in the power or pace of delivery as “Rock Hard Sticky Sweet” continues to extract high grade, no-nonsense rock n’ roll from the rich lode that The ‘Wreck are mining with much endeavour.

“Just A Dog” rolls into town announcing it’s arrival with a southern-based groove that suits Moat’s gravelly vocals well and provides a pleasurable change of tack; this is no one-trick pony here. Yes there is the AC/DC comparisons but that is no bad thing in itself (it’s worked well for Airborne) but there’s much, much more to this. Album closer “SnowFalls Down” is an anthem without doubt, very much in the vein of The Answer‘s excellent “Come Follow Me”.

‘This Is Hell‘ has been over 2 years in coming but it certainly has been worth every minute of the wait. This is an offering that will satiate the gods of rock, high atop their lofty peaks, along with us mere mortals for some time to come. Crafted in just 11 days it’s no-nonsenset hroughout; from beginning to end the rock n’ roll formula is successfully applied in droves.