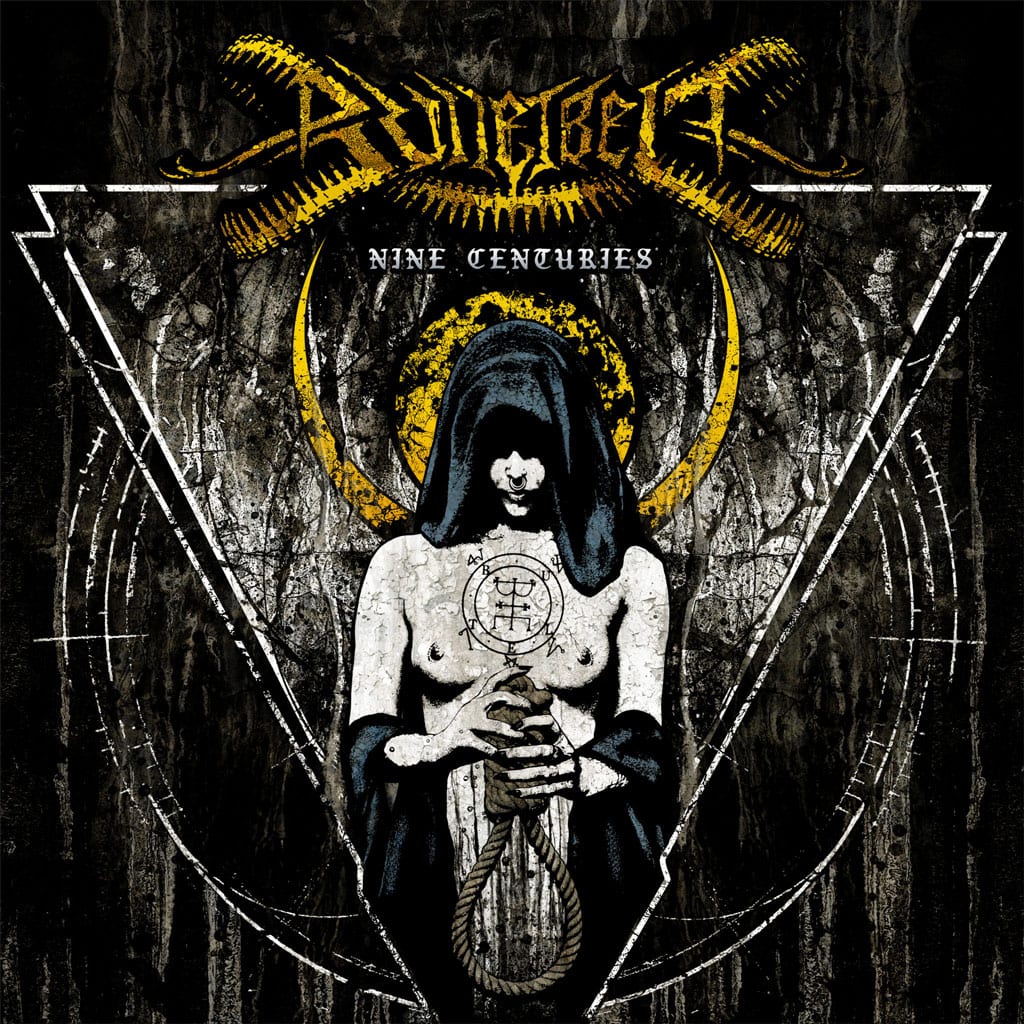 “The Uncanny Valley” — the phrase normally used to refer to computer generated images and robots as they reach a level of realism was on my mind as I came to listen to the new Bulletbelt release. While the phenomena don’t have a direct correlation to music – I find a sense of similarity when it comes to the production quality of an album. An independently released demo can show a bands potential and their raw, unpolished energy; to the major label release with pristine production and no jagged edges that somehow fails to have any depth left in it; to that rare gem that manages to blend production, songwriting, technical excellence, creativity – and pure mayhem in measures that balance each other out. Usually, you can tell one from the other within moments of first hearing an album, and with that in mind – I’ve prepared my ears with cheesy sci-fi and comedy, to maximise my descent into Nine Centuries of evil…

…I turn off the lights and let darkness envelop me, headphones on full volume and my journey begins with an eerie howl, a witch whispers in my ears conjuring forth hell and beyond, first in the right ear, then my left; a sense of foreboding grows as I’m thrown straight into the title track Nine Centuries.

Genre-wise, Bulletbelt often get thrown into the black metal camp due to vocalist Jolene Tempests visceral vocals. The truth, however, is a much more nuanced bag that keeps them tucked into their distinctive style – gravitating more towards a blend of Iron Maiden-esque NWOBHM, old school punk, hints of modern thrash/power metal with a covering of black metal to create a unique combination that somehow works.

With the writing/recording of Nine Centuries, the band set out with the intention of producing something raw and unbridled, unpolished in its execution whilst not cutting any corners on production, and as I hear these songs for the first time they’ve definitely managed to accomplish what they set out to do; but do I like it? I admit it took me awhile to adjust the raw urgency of Steve Francis’ drumming, but as familiarity with each song grew what once felt like a jittery blast beat was just natural, and it was good.

“Haegtessa” drops the tone with a slower beat, throwing in a dose of something one might find on a more hard rock album, but tempered with classic metal and thrash leanings that we’re still well in the realms of metal.

As the album progresses, we ride an onslaught of metal – plentiful solos and riffs from guitarists Ross Mallon and Seth Jackson blend with the scathing vocals of Jolene and guest appearance from Midnight’s Vanik – I think it’s safe to say we’re not in Kansas anymore and I’m taken to back to hearing some of these songs live for the first time at Auckland’s Kings Arms Tavern, my minds eye shifting between visual flashbacks of live shows and the darkness of my room, my skin has literarily began to itch, and a joyous torment awaits.

As we close, “Hypatia” opens with a string quartet from the New Zealand Symphony Orchestra, before erupting into an epic, uplifting metallic riff without throwing the band into the trope of a symphonic black metal band. The tensions rise like an anthem reaching it’s climax – and then all hell breaks lose as groove-laden bass lines from Tim Mekalick interleave seamlessly between the blackened frenzy before closing out with the near 10 minute finale.

Unfortunately, a few months ago both Jolene Tempest and Seth Jackson parted ways with the band, with Scott Spatcher-Harrison; formerly of Christchurch legends Human being welcomed to the fold as vocalist/frontman. So the next time I hear these songs live – they won’t be “these songs” anymore, they’ll be an evolution, a third chapter for the band – and if past live performances have taught me anything – whilst the visual element of the show may change, the ferocity and power behind Bulletbelt is only going to grow.

Bulletbelt is set to tour with Japanese metal legends Sabat in May 2018.