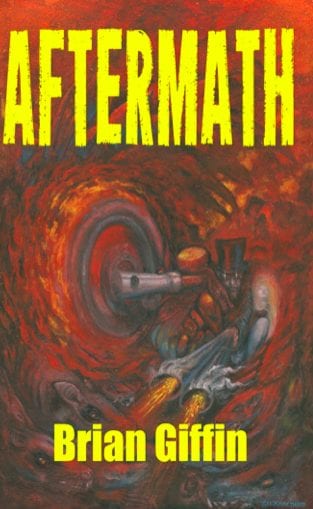 The lounge of the Blue Mountains’ historic Carrington Hotel, with its deep high back chairs, vaulted ceilings and heavy rug carpets, is a complete dichotomy to how author Brian Giffin sees it in his novel Aftermath. In his mind, the hotel is just one small part of Sydney that has fallen victim to fire and chaos after an alien virus wiped out the majority of the world’s population overnight. Giffin’s book takes his love of heavy metal music and fascination with end-of-the-world scenarios to shape a post-apocalyptic adventure focusing on the struggles of two disparate individuals, their unlikely alliance and the lawlessness of the new world’s survivors.

Sitting here today surrounded by elderly couples at lunch, it’s strange to imagine this beautiful place decrepit and desolate. Stranger still is wondering if the confident and chatty rock ‘n’ roller across from me is imagining the room burning around us or its patrons zombified and rotting. “It’s interesting you mention zombies actually because the story has its roots in the zombie genre,” says Giffin.

“I was actually in the Botanic Gardens, and in the middle of the gardens is Government House: [a] great big mansion surrounded by a fence in a park; and for me, that seems to be a great setting for some scary things to happen. The idea came about from people in a perilous situation – what would happen if society collapsed overnight somehow? It’s something that doesn’t happen gradually.

“I’ve been interested in societal breakdowns and focusing on individuals within that [scenario] very much. These normal people who have no particular special skills are suddenly thrown into this extremely unusual situation and how they manage to deal with that. The ideas came from fascination.”

A Sydney resident for many years, Giffin hones in on what is around him to create his story and has been ruthless in his narrative. From Homebush to the North Shore to the Blue Mountains, nowhere is safe from Giffin’s unrelenting pen. However, Giffin admits he has some anxiety that what he is writing could one day happen. “I think about that all the time,” he says reservedly.

“I grew up in the ’80s when we were on the brink of war most of the time – most of my high school years, all we were talking about were nuclear wars and stuff like that. [Ronald] Reagan was president, the guy before [Leonid] Brezhnev, the Russian guy, [Margaret] Thatcher was Prime Minister… so there were all these hawkish, extremely conservative, warmongering people everywhere. It wasn’t quite some of the tensions we have today, so yeah, I think about it all the time, especially the impact of a nuclear explosion above Sydney. It was very forward in my mind all the time that these things could happen – there’s really nowhere you could run to that would be safe.”

An intricate web of violence, humanity and adversity that encompasses elements of the alternative lifestyle, Aftermath isn’t Giffin’s first publication. In 2015, Giffin published The Encyclopaedia of Australian Heavy Metal, single-handedly pouring over the archives to compile biographies and discographic information on more than 2000 bands from all parts of Australia. It’s the reference book every die-hard Australian heavy metal fan should own and an impressive catalogue. Griffin’s latest endeavour is, however, not as far a cry from heavy metal as you may think. The alternative way is, as Giffin explains, intertwined. “It’s there the whole time – these people are from an alternative lifestyle. There are a lot of characters in there the community will feel an affinity with.”

Giffin’s main protagonists, the 16-year-old well-mannered, well-educated Tahnee Goss, and the outlaw biker, Talon Willis, are the prince and the pauper of Giffin’s tale that when stripped back in adverse circumstances show that ultimately everyone is the same. “Bikers are considered to be outlaws of society; I thought that the disparity between the two would be very striking and it would be an interesting pairing for the two of them to come along and show that there is that great levelling going on.

“This guy who has been very self-reliant despite the fact he’s been a member of this group, the first thing he wants to do once his group is gone is to kill himself. Whereas, when she loses all her friends, she makes the decision that she’s going to keep going. They both make that same decision in the end, but they do it very strangely. It’s almost like that first thing is that he can’t live without his support network, whereas she decided to continue even though she’s seen all her friends horribly destroyed. To me, it just worked.”

In addressing the macabre and utilising heavy and thought-provoking words like ‘fire’, ‘chaos’, ‘smoke’, Giffin provides a dissonance of reactions only to strip it all back to reveal a natural, human side to both his characters and Giffin’s own mindset. Ultimately, Giffin’s more secular interests and pensive notions were made to reveal an interesting vulnerability in our society. “[Aftermath] had to be as accurate as possible and show how bad things are – the post-apocalyptic genre is very broad, and a lot of times, it doesn’t really show the desolation that would be caused.

You can purchase Aftermath and Brian Giffin’s other works via his official online store.