Out of Denmark comes something wicked – wicked as in the sense of cool and something you must have of course. Yes fronted by the amazing vocals of Maja Shining Dannish outfit Forever Still are about to surprise all with a brilliant new album called Breathe In Colours – an album that is very different to anything we have heard from them before. HEAVY Mag was lucky enough to be to sit down and chat to Maja about the brand new work.

“I think it is different for everyone,” she says laughing when I ask whether she is nervous or excited about the fact the album is about to be released to fans. “Personally I don’t get nervous but the big problem is you finish an album and then it is sitting there for ages and then they are like ‘let’s push it back because it is better to come out here… we can do more promotion there yada yada yada.’ So it has been done quite awhile and you get really anxious about sharing it. I feel for me that I made this album with my whole heart and we put so much energy into it, we didn’t make any compromises, so I am not nervous about people not liking it, and there will surely be people who don’t, because that is okay, we did what we wanted to do.”

“For us the writing sessions this time were a bit different to what we did with the last album,” she explains. “We didn’t have a place to live while we were doing it because our apartment was being renovated so we went to this small room and just brought the bare essentials – like a microphone and a drum machine and a guitar. So the song writing was such a basic set-up but that let us just focus on writing the songs rather than having this great big production about it which didn’t come until later when we were back in the studio.”

You can listen to our full interview with Forever Still on Spotify. Breathe In Colours will be released through Nuclear Blast on March 29th. 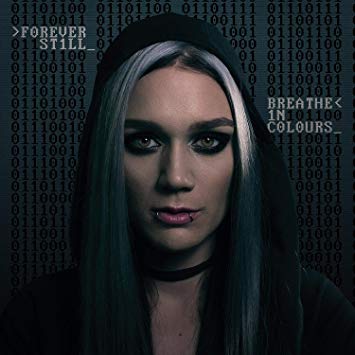