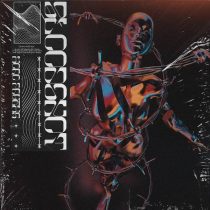 A big hairy bloke, who loves a beer, once bellowed. “Gimme fuel, gimme fire, give me that which I desire”
Well Papa Het have I got the band for you!

Sydney based Bloodshot have unleashed their debut six track e.p Mono Pneuma, and it contains more than enough fuel and fire(power) to stoke the desire of any metalcore fan.

Let me know when you’ve finished picking the cheese off that introduction, and we’ll get started.

The Simulation fades in with a few seconds of drums and synth type theatrics before unleashing the full force of a bass guitar that sounds as though it’s being plucked by a sledgehammer. All of this is supported by some very technical guitar licks and the sort of vocals you’d expect to hear from bands with words like, Napalm and Morbid in their titles. The chorus arrives in a flash and shows that the guy with the mike is not just a one trick pony. Moments later, a lead break flashes by that is so good you will want to hear it again just to make sure your ears weren’t fucking with you.
The song runs for two hundred seconds, and not one of them is wasted.

Haywire replaces the technical fretboard wizardry of the opener with crunching chords that are frog marched every step of the way by some brutal drumming. The song maintains an effective stop start rhythm almost all the way through, oh and did I mention it is fucking heavy?

Distention picks up where Haywire left off, but quickly moves into the kind of territory that Fear Factory inhabited during its more propulsive, heyday moments. And the addition of gang vocals in and around the chorus will play out brilliantly live.

Guitars are to the fore for the opening salvo of Vendetta, leading into yet more double kick and bass guitar savagery. By the time we reach the chorus, which is preceded by some seriously guttural vocals, the Fear Factory comparison returns as Emad Ghaffar sings clean and nails it.

There is a helluva lot going on during Defy Dismay, and it says a lot about Bloodshot that they can pull it off. Starting off with the heaviest stomp intro you can imagine, harassed in the background by an air raid siren riff before normal service is resumed with foundation shaking bass, drums and vocals. Quirky guitar notes float in and out after the initial onslaught, and the technical ability of every band member is well and truly on show. Leading us into the last minute or so, where ‘crushing’ doesn’t begin to do it justice.

Final song Anima does a great job of bookending how this all started a mere fifteen minutes earlier, with drums, guitar and vocals held back in the mix before blasting forth. And blast it does, through its chaotic verse, right on into an equally bombastic chorus. Then, just as you think things can’t get any heavier, a monstrous, fitting ending awaits.

It probably says more about my age than anything else by name checking Fear Factory as opposed to the band’s nominated influences, being Polaris, Northlane and Alpha Wolf. Who (if I’m being honest) I thought were the
names of Elon Musk’s triplets…

But this is seriously good. If Mono Pneuma were a movie character, it would be Christian Bale from The Machinist, zero fat, not a moment is wasted. And it sounds sensational thanks to the production values on offer.

Provided they don’t ‘Self Destruct’, as bellowed by that hairy bloke who loves a beer, Bloodshot has a helluva lot to look forward to, as do we.