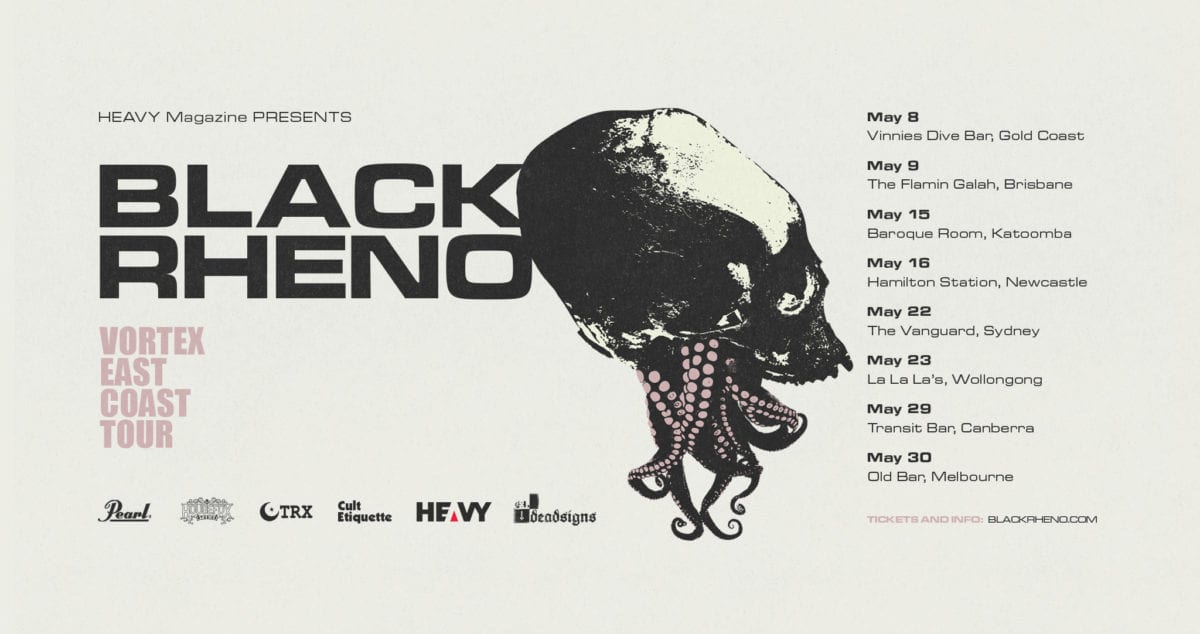 HEAVY Magazine is very proud to announce Black Renho, Sydney’s brutal-groove-merchants, are hitting the road for their first headlining tour since releasing Noise Smasher. May 2020 will see the boys brutalize along the East Coast of Australia including – Gold Coast, Brisbane, Katoomba, Newcastle, Woolongong, Canberra and Melbourne and they will be joined along the way with some very fitting and talented bands to blow your fuckin’ mind even more.

The band have a new video clip in the works and if previous clips are anything to go off… don’t worry about your mind… wait for your head explode!

Black Rheno released their debut album Noise Smasher October ’19 which saw them follow it up with a huge tour covering Japan, Australia & New Zealand alongside New Orleans sludge royalty EYEHATEGOD. Back home their debut LP which blends elements of sludge, metal, grindcore, stoner & groove into one big cesspit of meat-riff partying has received tonnes of attention across the board. From epic reviews, plenty of play on Triple J’s The Racket to being a featured artist on Rage TV’s ‘Wild One”. To then coming in hot at #27 on the Rage top 50 music clips for 2019 for the clip for their tune ‘Human’.

Black Rheno’s track record is steadily growing bigger having played shows in the US alongside the likes of Iron Reagan, Darkest Hour & Ringworm. To making their way across this wide brown land of ours time and time again with heavy hitters such as Napalm Death, Brujeria, Red Fang, Psycroptic, King Parrot, Revocation, Lock Up and Phil Anselmo & The Illegals to the most recent endeavours as mentioned above across Japan, Aus & NZ with EYEHATEGOD. Wielding only drums a guitar and a vocalist, Black Rheno have forged a name as being one of the biggest sounding 3 piece bands you’ll find and yet somehow creating a highly intensive and at times brutal display of sounds that still manage to translate into one huge party vibe atmosphere. This is definitely a band that feeds off that raw energy found at a live show when you don’t know what ups or down, left or right, you just know you have to go with it.