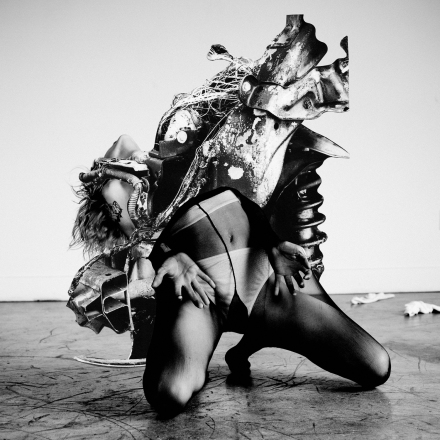 The first thing I did before sitting down to ingest Black Magnet’s record Body Prophecy, was jump on YouTube to check out their music video for the single Floating In Nothing.

Straight up I was met with strong Tool-meets-Aphex-Twin vibes. “Ok, sick,” I think to myself, “I can get down with this.” I then bunkered in to listen to Body Prophecy from start to finish, keen to find out what else was in store for me.

A History Of Drowning opens the record, with a rhythmic, repetitive vocal. It is a great way to set the tone before the beat picks up, though try as I might, I could not work out what the lyrics were, and I found this to be the biggest downfall of this album for me. The vocals are really nestled within the cacophony of chaotic, industrial metal and electronic beats, so if you are the kind of person who connects to your music mostly through lyrical content, you might not vibe with this record. I did, however, get the impression that this was perhaps exactly the overall feel Black Magnet are looking to achieve.

The second track Violent Mechanix and fourth track Incubate have a huge Manson/Reznor energy and I was finding myself transported back to the mid to late 90’s and wondering if I am out of touch with a scene I thought didn’t really exist anymore. The sound is so familiar in a pleasingly nostalgic way, if, like me, you were youthful in that time period. If you like your metal to meet your club beats, if you like drug-fuelled energy without the drugs (or with the drugs, who am I to judge?), and if you want a record to put you down the rabbit hole of chaotic, aural abrasion then you might dig this.

The standout tracks for me were Hermatix and Sold Me Sad. I possibly favoured these tracks due to these being the songs with the most legible lyrics.

Hermatix draws the listener into verses that deliver a slow build-up of ominous energy before bursting into deliciously heavy choruses. Those dynamics are something I really enjoy, and as a result, this song really grabbed my attention.

Sold Me Sad really changes the tone. Much of the record holds the same chaotic and cacophonous atmosphere but Sold Me Sad is to Body Prophecy what Hurt is to The Downward Spiral. My only wish is that this song had a few progressive changes and went for a little longer. Sold Me Sad has such an emotive feel, and I was expecting it to take me somewhere, but it trails off at two minutes thirty seconds.

Last Curse hits you straight in the face immediately after Sold Me Sad and is another extremely Manson -esque song. I will admit this one made me turn the volume up; it is a song that I can picture being a huge vibe under the strobing lights of a pumping music festival, which makes me think Black Magnet are a band that could likely be better appreciated in a live setting than a record.

The second last song on the record, titled Dowsing, dead set made me feel like I was being subjected to some kind of Stranger Things-esque, mind-bending experiment. In fact, calling it a song is misleading, as it is more or less an uncomfortable assault of white noise. Probably don’t listen to that one through headphones, is my hot tip!

The record closes with Incubate making another appearance in remixed form courtesy of Justin K Broadrick, of Godflesh notoriety.

While there are standout tracks, there were quite a few songs that sounded pretty samey, and though the record is well produced, I don’t feel it is treading any new territory overall. This is not to say that this is a terrible thing, as fans of industrial metal are likely to really enjoy Body Prophecy, and I really enjoyed that Black Magnet could aurally transport me to a time of wearing studded chokers and wrist cuffs and partying in the dingy warehouses of old.

That’s why it is so damn beautiful!!!!

PrevPrevious.Premiere: AS A RIVAL: LOST AT SEA
Next.OCTOBER ENDS With Grim Message On New SongNext